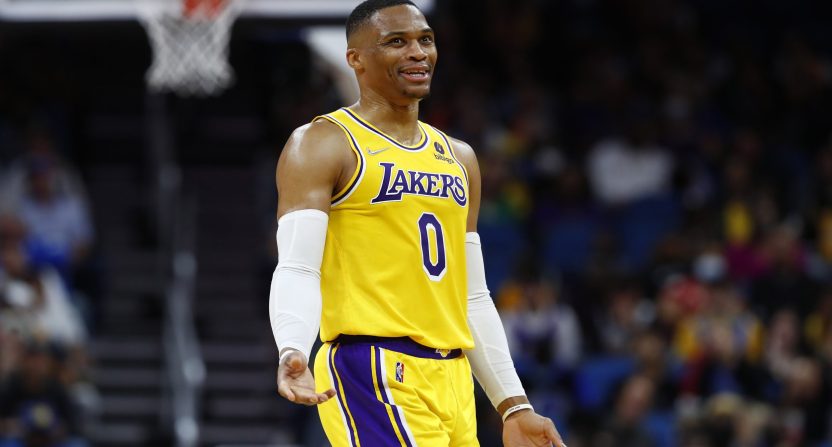 Russell Westbrook should have known. He’s been the convenient fall guy for most of his career.

It’s all going wrong. The Lakers, a presumed championship contender, have been the biggest disappointment in the NBA. They’re 23-24 and might not make the playoffs.

You could point to fragile Anthony Davis’s latest injury; he’s missed the past 17 games with a knee strain. However, even when healthy, Davis has looked like a shadow of himself.

You could point to LeBron James. While he’s having another great season, he’s 37 and is no longer physically capable of carrying a team.

But no, let’s blame the new guy. To be fair, we all questioned the acquisition of Westbrook. His high usage rate and low-shooting accuracy seemed like an odd fit. However, no one thought it would be this bad. Westbrook is having the worst season of his career, and this is a marriage made in basketball hell.

No NBA player should have this many bad misses pic.twitter.com/MbIxFUFEb6

Last week was a new low when besieged Frank Vogel did the unthinkable- he benched Westbrook in the fourth quarter of a home loss to the lousy Indiana Pacers. Vogel, who might be coaching for his job, bluntly said, “Playing the guys that I thought were gonna win the game.” The hot seat speculation seems unfair for a coach who won a title two years ago. It’s not his fault the team is hurt and poorly constructed.

To Westbrook’s credit, he didn’t complain. At least not publicly. A few days later, the former MVP said, “My job as a player, as a professional, is to do my job, continue to find ways to be able to help impact winning. That’s all I was thinking about and turned the page to do and that’s what I tried to do tonight.”

Westbrook’s time with the Lakers might be short. There have been reports that L.A. is trying to shop him before next month’s trade deadline. But the market is limited for a 33-year-old point guard who’s making $44 million this season and is scheduled to be paid $47 million next year (although the deal will expire in 2023, freeing up a lot of money for any takers).

NBA reporter Marc Stein reported that a swap for John Wall might be possible. Wall hasn’t played all season for the Washington Wizards and also carries a hefty salary. But it’s hard to see how this would make the Lakers better since Wall is also a notoriously poor shooter.

Westbrook and the Lakers might be stuck with each other. If true, it seems unlikely that this team will all of a sudden “figure things out” even when Davis returns to the lineup. However, ESPN’s Adrian Wojnarowski thinks patience may be the best option. This is Westbrook’s fourth team in four seasons. He’s still adjusting.

“The Lakers haven’t played a ton of games together with Davis, James, and Westbrook,” Wojnarowski said. “He’s trying to find the formula to fit in. He ultimately knows he’s going to be judged on winning. He just hopes that as they get this group back together, they’re going to start to find some chemistry.”

At first glance, Westbrook’s numbers don’t seem terrible. The greatest triple-double threat in modern history has nine of them this season. Only Nikola Jokić (11) has more. But don’t look purely at the counting numbers. Check out the advanced statistics. Westbrook is struggling through career-worsts in win shares, box plus-minus, and value over replacement player. His player efficiency rating is the second-lowest of his career.

Who deserves the blame for this failed experiment? If you believe that James has been a shadow general manager since leaving Miami in 2014, then it’s LeBron. This would be a rare miscalculation. He’s usually adept at surrounding himself with the right complementary players. When he needed additional help in his advancing age, the Lakers brought in Davis. That led to the 2020 title.

What was the thinking with Westbrook? L.A. thought adding another All-Star would ease the burden on LeBron, who’s in his 19th season. Someone else to initiate the offense and be a finisher on the fastbreak. Certainly, Westbrook has had his moments and ridiculous athletic plays. But there haven’t been enough of them to offset his inability to hit open shots or his casual attitude towards defense.

Never has a player so skilled been this much of a liability on a team with championship aspirations. If Westbrook were younger, there might be optimism. But he’s 33 and a fully-formed adult. He ain’t changing now. This is who he is.

And the Lakers are running out of time to save their season.