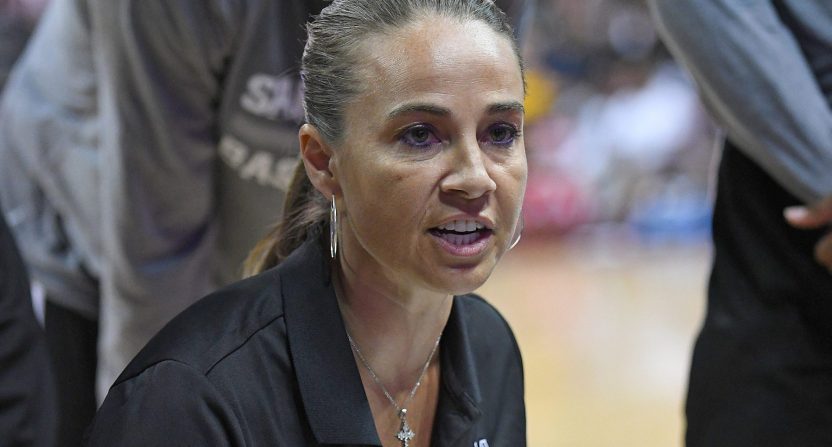 Sometimes it seems we argue so much about where Becky Hammon should or shouldn’t be that we forget to recognize how impressive it is that she has gotten to where she is.

On Wednesday, the San Antonio Spurs announced they have promoted Hammon to the assistant coach position left vacant by new Charlotte Hornets coach James Borrego. Whereas she has spent the past four seasons sitting behind the team’s bench, she will now sit alongside Gregg Popovich and the Spurs players on the main bench.

Five years ago, it would have been difficult — if not impossible — to imagine Hammon would wind up in a role like this. Back then, she was a WNBA point guard, finishing up a career that earned her six All-Star berths and a spot on the league’s list of its 20 greatest players. But despite her remarkable resume and her reputation as a brainy player, she was an extreme long-shot to coach in the NBA for a simple reason: There had never before been a female NBA coach.

Then Hammon met Gregg Popovich, won a job on the Spurs bench, coached the team’s Summer League squad, earned the respect of the San Antonio players and helped lead the Western Conference All-Star team. Now she’s gotten herself a promotion.

In May, Hammon interviewed for the Milwaukee Bucks’ head coaching vacancy, leading to a fairly fierce debate over her qualifications, with some fans and analysts suggesting she was cutting the line and others arguing that her resume was as impressive as anyone’s. Quickly, the dominant storyline around her became jobs she doesn’t have, as opposed to the one she does.

But on the occasion of this promotion, it seems appropriate to reinforce just how incredible Hammon’s rise has been. She overcame all kinds of internalized sexism to break a notable glass ceiling. And she acquitted herself well enough in her role to earn favored status among Spurs assistants. That’s pretty damn impressive.

We don’t mean to suggest Hammon should be satisfied with where she is. She has said she wants to be an NBA head coach, and she should work like hell to get there. But if she never climbs any higher on the league’s coaching ladder, that won’t take anything away from what she has accomplished already.