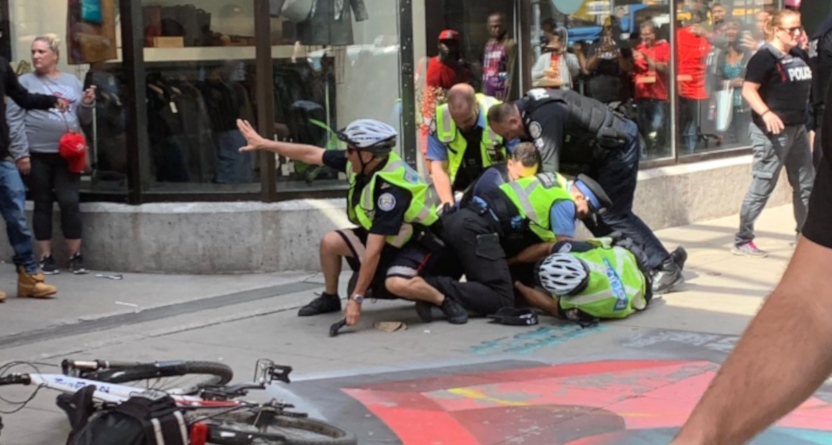 The Toronto Raptors’ NBA championship parade and celebration Monday drew incredible amounts of fans, but it was marred by a shooting. As per the Toronto police, a shooting took place near Nathan Phillips Square (the area outside Toronto City Hall where championship speeches were being given), injuring two people (update: that total’s now at four). Two people were taken into custody shortly afterwards, with a third taken into custody later:

Kris Pangilinan of Toronto’s CP24 breaking news TV station tweeted this photo sent in by a viewer of police taking down a suspect:

#BREAKING: A photo provided to CP24 by a viewer shows Toronto Police take down a suspect outside Toronto Eaton Centre moments after the shooting at the Raptors celebration occurred. 2 TTC Special Constables also assisted. You can see the gun in the hand of a TPS officer. pic.twitter.com/3EZT3mPVAZ

Jennifer Pagliaro of The Toronto Star provided this aerial view of the scene:

I’m on the roof of city hall and something is happening. People are running including what looks to be cops and security pic.twitter.com/FEbhw88OqI

And Meagan Fitzpatrick tweeted video of people trying to get out of the area, and a photo of the belongings they left behind:

Something just happened in the crowd. Not sure what. People started running. People getting trampled

This happened near the back to the right if you are facing city hall. Ceremony is ongoing though.

And again. People running away from the right side. Not sure what’s going on pic.twitter.com/1fEoGoaVMl

A lot of people lost shoes and bags in the stampede to clear the area when people went running. #WeTheNorth pic.twitter.com/6eQYFtCI24

The stampede (in two waves) after the shooting changed the vibe here, understandably. The crowd was still loud but you could tell, not as into it and as responsive to what was happening on stage. #WeTheNorth #Raptorsparade

Meanwhile, CTV published a video of this appeal for calm from the main stage:

It’s good to hear that the injuries aren’t life-threatening. But it’s highly unfortunate for the Raptors and their fans that gun violence marred their parade and celebration.