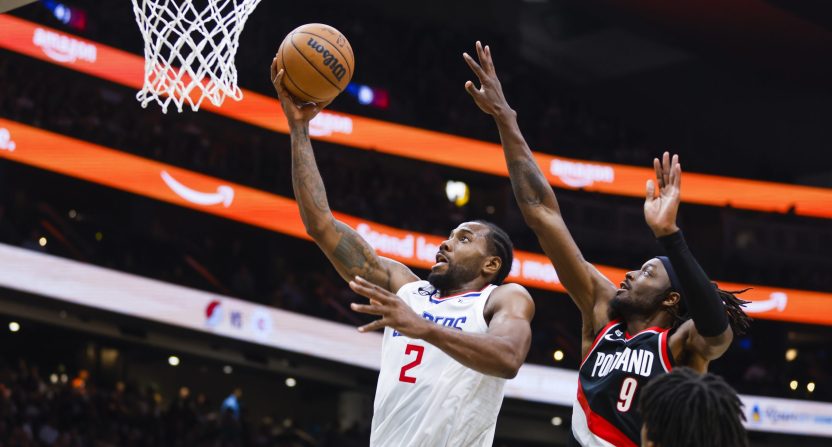 Monday brought many more storylines than the typical day in NBA preseason action. The headliner was the return of four stars to game action.

Simmons — 26 and a three-time All-Star — played his first NBA game in 470 days after a back injury (that led to offseason surgery) and mental health struggles last season.

It was also his first game with the Brooklyn Nets; he was traded by the Philadelphia 76ers to the Nets in the blockbuster deal involving James Harden last season.

Simmons had six points (3-of-6 from the field, 0-2 on free throws), five assists, four rebounds, and one steal in 19 minutes against the Sixers, fittingly. He was part of a Brooklyn starting lineup that included Kevin Durant and Kyrie Irving.

Murray — 25 and best-known for his NBA bubble dominance — returned to action for the Denver Nuggets after tearing his ACL in April 2021. His 539-day absence was the longest of these four players.

He played 15 minutes for the Nuggets against the Oklahoma City Thunder, scoring 10 points (4-of-7 from the field, 2-of-3 on threes, 0-1 on free throws) and dishing out two assists. He even hit a buzzer-beater to end the first half.

After 539 days, Jamal Murray is back. pic.twitter.com/cumPM67ITH

Monday’s game between the Los Angeles Clippers and Portland Trail Blazers featured the return of Leonard and Lillard.

That's a combined 1,761 days since each of their last games. pic.twitter.com/0KuNA5i2sz

Kyrie Irving discusses Ben Simmons' return to the court and integrating him into the Brooklyn offense:

"I was telling him at halftime, 'when you're playing with some high-level players, despite what you heard, we're going to make the game easy for you" pic.twitter.com/JT3Ihi3nLV

KD on Ben Simmons: "You spend a year off from the game and you play organized basketball again, that's a nerve wracking feeling. To wake up that morning…you're thinking about those minutes you're going to play. So it's good to see him get over those nerves." #Nets

POV: You’re announced as a starter for the Denver Nuggets for the first time in 539 days.

Kawhi Leonard’s turnaround jumper is a thing of beauty pic.twitter.com/6SHEyXg9pS

Every Clippers player who was asked about Kawhi Leonard during training camp said he looks like himself and even better.