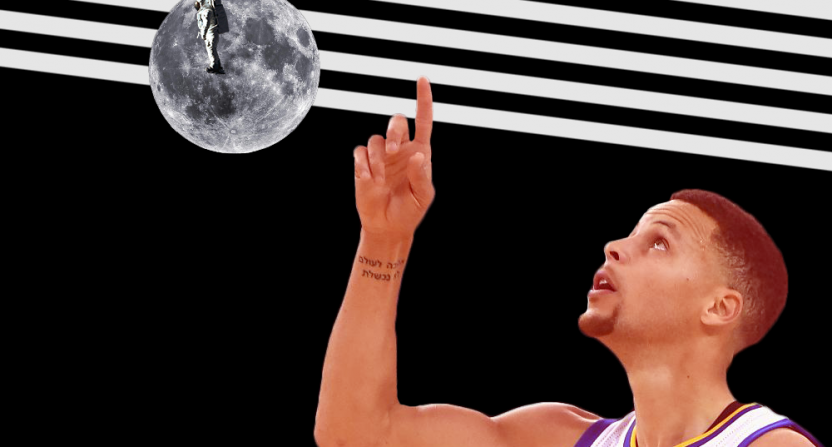 To be fair, of all the crackpot, YouTube-video-proven conspiracy theories out there, saying that the moon landing was fake is probably the safest bet to take. We’re not believing it, mind you, but compared to the intricate conspiracies that populate the internet and seep into our culture in the strangest ways, a fake moon landing belief is downright quaint. It’s understandable, in the way that any conspiracy theory is understandable, that people who were not alive for the space race and don’t know anyone associated with it could come to believe that it was all an elaborate stunt filmed in a sound studio (by Stanley Kubrick?).

So when a professional athlete or celebrity comes forward saying they believe the moon landing was fake or the Earth is flat, there’s always a bit of eye-rolling that comes with it. It’s easy to wonder what the harm is in people having their own dumb beliefs, but then you think about how much influence and sway a professional athlete has, especially over children. Then double that for superstars who transcend their sport and become household names. They are role models, by choosing or not. And by spouting conspiracy theories to the masses, be they extremely negative or plain-old silly, sends a signal that we need not believe what we’re told by science or history, much in the same way a certain president might do it.

From the league that brought you "hey maybe the earth is flat," apparently we now have "the moon landing never happened." Yes, on a recent podcast, Steph Curry, Vince Carter, Andre Iguodala & Kent Bazemore said they buy into the conspiracy theory that the whole thing was faked. pic.twitter.com/QNzWdg6PMF

And so when Steph Curry said on The Ringer’s “Winging It” podcast that he didn’t think we actually went to the moon, it deserves more than just a casual sigh.

TEPH: We ever been to the Moon?

STEPH: They gon’ come get us, I don’t think so either.

The Warriors guard was asked again by host Annie Finberg:

FINBERG: You don’t think so?

Curry got his first chance to back away from the silly theory on Monday but seemed to want to make it clear that it was something he was willing to dig his heels in on.

Curry met with some tech journalists (and me) late last night and was asked about the moon landing comment. He smiled and said: "Inquisitive minds ask inquisitive questions and obviously that's one that's very polarizing in terms of where you stand on that… (more)

More Curry: "But I've got a lot of interesting feedback from some ex-NASA astronauts that I'm planning on having a conversation with. So some good is going to come out of this, for sure."

Note: I'm 95% Curry was joking when he made the original remark on Kent Bazemore's podcast.

From there the reaction got salty on Twitter as well as from the science community, with plenty of folks from NASA offering to show Steph around and provide him with proof of the mission. As you might expect, with the issue reaching fever pitch, Curry backtracked on Wednesday, saying he was totally joking and that we, the public, are the real conspiracy theorist.

“One thousand percent,” Curry told ESPN on Wednesday of accepting the invite. “One thousand percent. Obviously I was joking when I was talking on the podcast. [Then] I was silently protesting how stupid it was that people actually took that quote and made it law as, ‘Oh my God, he’s a fake-moon-landing truther,’ whatever you want to call it, yada, yada, yada. So I was silently protesting that part about it, how the story took a life of its own.

Silently protesting? As you do, we suppose. Curry then went on to kinda-sorta put the onus on the kids who look up to him to make better decisions than he did (unless you believe he was totally joking the whole time, which he wasn’t).

“But in terms of the reaction that I’ve gotten, I am definitely going to take [NASA] up on their offer. I am going to educate myself firsthand on everything that NASA has done and shine a light on their tremendous work over the years. And hopefully, people understand that education is power, informing yourself is power. For kids out there that hang on every word that we say, which is important, understand that you should not believe something just because somebody says it. You should do your homework and understand what you actually believe.

So, Steph is trying to make out like this was his plan all along, to drum up attention for NASA so that children can learn the truth about the moon landing. That from the moment he was asked that random question on a podcast, he was plotting a giant media conspiracy meant to turn the mirror back on us for judging him so harshly. And in the end, the joke was truly on us (and children?).

I think Steph Curry is a great player and seems to be a great guy, but I don't know what he or anyone else thinks they're proving by saying something stupid that questions facts and reality and it getting picked up. People believe dumb things. https://t.co/tNBkE8isuK pic.twitter.com/jAz8DuXZNl

Sure, we suppose that could be true. Or Steph could just take the L, do better next time, and remember he’s the adult in the room.