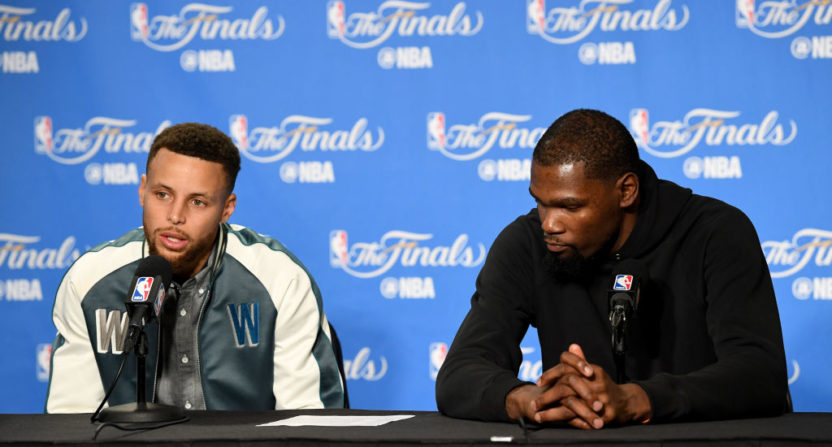 Possibly the only thing stopping the Warriors from continuing their dynasty is a divided locker room. Kevin Durant, one of Nike’s biggest athletes, put the team’s chemistry at risk two weeks ago when he said on The Bill Simmons Podcast that “nobody wants to play in Under Armours.” His teammate, two-time MVP Stephen Curry, has a major endorsement deal with Under Armour.

In a recent interview, Curry told the Charlotte Observer’s Scott Fowler that Durant’s comment won’t have any negative effect on their relationship. However, the star duo did have a talk to clear things up:

Stephen Curry felt strongly enough about Golden State teammate Kevin Durant’s recent swipe at the Under Armour basketball shoes Curry endorses that the two have since “had a conversation about it,” Curry said.

“This is nothing that is going to put a wrench in the locker room,” Curry told me.

Remember that Curry has been critical of Under Armour before as well. When UA CEO Kevin Plank endorsed Donald Trump during last year’s campaign, Curry responded by calling Trump an “ass” instead.

“I told him that he has a certain opinion based on his experience growing up in the Nike business,” Curry said of Durant. “What that means when it comes to the competition among shoe brands and universities and the whole grassroots system and whatnot – he’s entitled to that opinion obviously. … But when it comes to what I’m trying to do with Under Armour, and what the Curry brand means and what Under Armour basketball means, that statement does not ring true at all.”

“Where we were four years ago, and where we are now – you can’t tell me nobody wants to wear our shoes,” Curry said. “I know for a fact that they do.”

Under Armour’s stock dipped three percent the day after Durant’s comments went public, but it’s since come back up. Curry said his conversation with Durant ended with mutual respect about each other’s sponsorship deals, so it appears everything is just fine in the Bay Area.