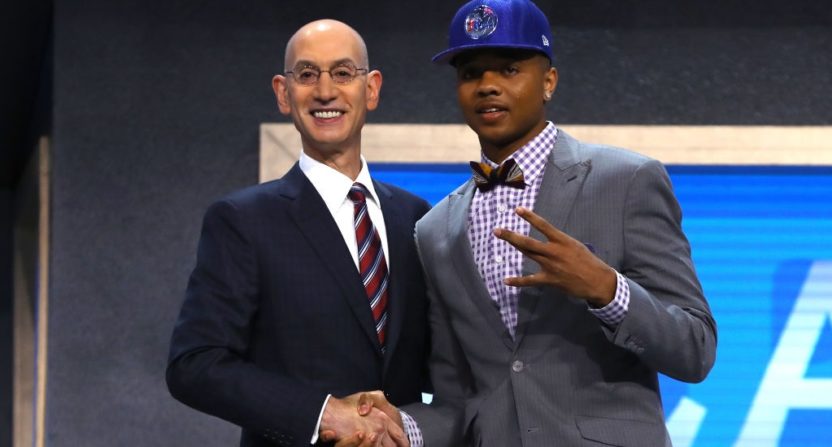 NBA commissioner Adam Silver is – by far – the most forward-thinking chief executive of the four major sports leagues. With Silver leading the way, the NBA is proposing draft lottery reform which is scheduled to be voted on Sept. 28.

The NBA wants to stop teams from tanking. The process of deliberately assembling a bad team in order to increase your chances of getting a high draft pick has been done both covertly and overtly in all team sports. It’s more obvious and more problematic in the NBA, where the divide between the “haves” and the “have nots” is greatest.

The league originally instituted the NBA Draft Lottery in 1985 to prevent tanking because several teams the year prior lost games on purpose to secure the No. 1 overall pick
(Houston won a coin flip over Portland and drafted Hakeem Olajuwon). The 14 teams who do not qualify for the playoffs have a shot at the No. 1 overall pick. But the lottery hasn’t stopped team from putting together non-competitive rosters.

Perhaps Silver will succeed where his predecessor David Stern failed. Under this new lottery proposal, the teams with the three worst records will have only a 14 percent chance of getting the No. 1 overall pick. Currently, those teams have a 25 percent, 19.9 percent and 15.6 percent chance. Also, the team with the worse record could wind up with the fifth overall pick. These changes would take effect for the 2019 draft.

Silver is concerned. Tanking is bad for business, especially in the NBA where there is already a chasm between the great teams and everyone else. But perhaps Silver isn’t going far enough with out-of-the-box thinking. There is one surefire way to prevent tanking in sports: Eliminate the draft.

You don’t need a draft to run a sports league. The draft basically exists for two reasons: controlling player costs and for marketing purposes. The draft sets a limit on what the incoming workforce is going to be paid. Why? Because the owners don’t trust themselves when it comes to spending for talent.

The draft is also used to hype the league. It has always been more of an infomercial than an event. Mock drafts, the actual draft and players in suits are strictly for the fan base to feed upon. Did your team get better? Maybe. Maybe not. But for now, let’s all celebrate the hope that Team X has selected guy with upside.

Not only can sports exist without all this, but the draft is inherently un-American and anti-capitalism. In what other occupation are you forced to work for a designated employer?

Imagine the top medical school graduate at Harvard being forced to begin his career in Sacramento. Sounds preposterous. And yet, this is an accepted practice in sports. Most fans side with management rather than labor, so professional athletes don’t get much sympathy from the public. The justification is always “Well, they make a lot of money. If someone pays me millions of dollars to play a game, I don’t think a draft is that bad.”

Fans almost never consider how unjust it is. Instead of a draft, talent acquisition should come through a free-market system. Every player who is deemed “draftable” should be on the open market and allowed to negotiate the best deal.

It’s not as revolutionary as you think. It already exists in baseball for foreign players. Only American high school and college players are draft-eligible. Players from Latin American and Asia are essentially free agents. (In the last round of labor negotiations, the owners tried to institute an international draft. That plan never happened, but there is a spending cap.)

All available incoming players should be free agents. Right now, it looks like either Missouri’s Michael Porter or Duke’s Marvin Bagley will be the No. 1 overall pick in 2018. Why shouldn’t those athletes meet with the teams they want to play for and try to land the best deal possible for themselves? That’s how capitalism works: You’re paid according to your value. Why should there be limits on where they can go and how much they can make? Let the market dictate what their salaries should be.

I know. I know. The draft also exists for competitive reasons. Well, the NBA hasn’t been very competitive without a free market system. Since 1950, the Boston Celtics have won 17 championships and the Los Angeles Lakers 16. The Golden State Warriors just breezed to their second championship with the most overwhelming team in NBA history. Barring injury, they’ll be the odds-on favorite to win the next few years. So it seems unlikely that anyone else is going to be winning anytime soon.

Big metropolitan cities with an established track record of winning will always have an advantage over the rest of the league. In a free market, while places like Boston, L.A., Golden State, and Miami might be preferred destinations for all, these teams won’t be able to grab all the great young players. There are roster limits, limited opportunities and previous contracts. Not everyone can play for the Warriors.

And just by design, the tanking problem goes away. Teams are no longer compelled to put out the worst possible product in the hopes of winning the lottery. The Sam Hinkie Philadelphia Sixers wouldn’t exist. Fans would no longer have to pay high ticket prices for subpar basketball.

Instead, teams would be incentivized to be competitive. More competition equals a better NBA. Every team would want to have the kind of roster that would attract the top college and international players. There wouldn’t be as many wasted seasons for teams with little to show for it.

The Sixers bottomed out on purpose for multiple years, accumulating assets. If Joel Embiid and Ben Simmons don’t get healthy, it would have all been for nothing. The Lakers jettisoned top scorer Lou Williams when Magic Johnson was hired in February as they went into full tank mode. They got the No. 2 pick and selected Lonzo Ball. But under a free market system, they would have gotten Lonzo Ball anyway, since that was the only team he wanted to play for.

This all makes sense. However, it probably will never happen. The NBA likes the draft too much. It’s hope trafficking, which goes back to selling the idea that everyone has a chance. But the best way for everyone to actually have a chance would be a free market system.

If Silver wants a foolproof way to make the NBA its best, the time has come to dump the draft.