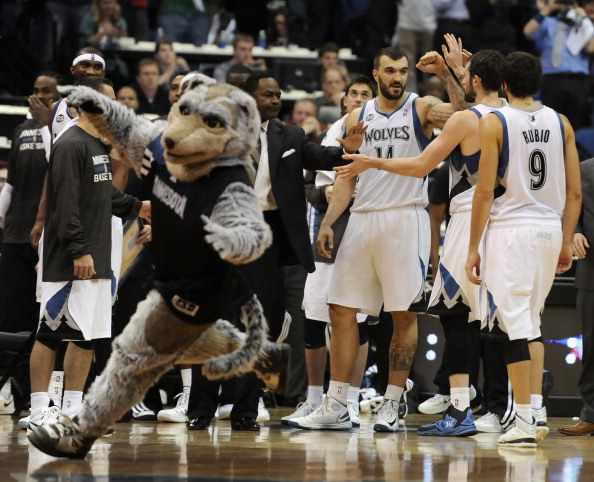 Jon Krawczynski of the Associated Press tweeted that he’s seen Minnesota Timberwolves mascot “Crunch” sled down the Target Center stairs for 20 years, and he’s never seen somebody get hurt during the routine… until Thursday night.

And the victim? Karl Towns Sr., the father of 21-year-old Timberwolves star Karl-Anthony Towns. Towns Sr. left the arena in crutches after “being blasted” by Crunch, and needs an MRI on his right knee:

Rough night for Towns family: KAT misses out on All-Star. Big Karl gets hit by Crunch on a sled and hurts his knee. He's a gamer though.

I've seen Crunch slide down the arena steps for 20 years and never seen someone get hurt. Wrong place, wrong time.

KAT's dad needed crutches to leave the arena after being blasted by Crunch. Says he's going to need an MRI on his right knee.

There doesn’t seem to be any video out of there of the incident (and the T-Wolves surely don’t want to promote their mascot causing an injury), but I found someone’s video from 2013 that gives you an idea of what it looks like with Crunch sledding down the stairs:

If you found yourself in Crunch’s path during this routine, it would be quite painful. But, let’s hope Towns Sr’s MRI doesn’t reveal a serious knee injury.

He surely at least enjoyed watching his (All-Star team snub) son on Thursday night, as Karl-Anthony scored 33 points and pulled down 10 rebounds. However, the T-Wolves lost the game 109-103 to the Indiana Pacers.