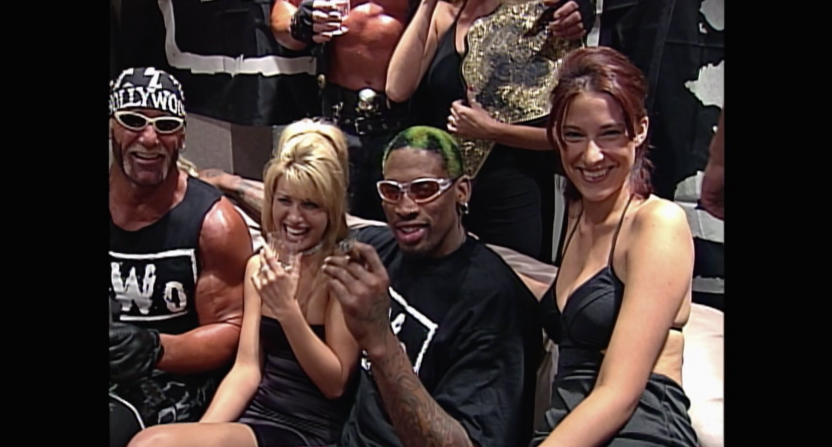 The Last Dance made its highly anticipated two-episode premiere last week, and was a massive ratings success for ESPN. The docuseries about the 1997-98 Chicago Bulls is getting tons of buzz and praise, and the next episode — Sunday night — focuses on Hall of Famer Dennis Rodman. So, ahead of the Episode 3 premiere, it seems like a good time to remember an extremely Dennis Rodman story from the 1998 NBA Finals.

The next day, the Bulls held a practice and NBA Finals media session in Chicago, and Rodman was absent. It wasn’t a full-on practice, but it was a “mandatory team film session and a media session as mandated by the NBA,” to go with shooting drills at the United Center, according to longtime Bulls beat writer K.C. Johnson (then of the Chicago Tribune).

Rodman’s absence wasn’t from being injured or sick. The seven-time rebounding champion was reportedly seen at a downtown Hooters, before flying to Detroit to appear at a WCW Nitro wrestling event with Hulk Hogan (at The Palace of Auburn Hills, Rodman’s former home as a “Bad Boy” with the rival Detroit Pistons).

Rodman was fined $10,000 by the NBA, and was also fined an undisclosed amount by the Bulls.

Now, Rodman disappearing to go do whatever else while with the Bulls was nothing new. For example, Rodman flew to Las Vegas on several occasions during his Bulls years, including between Games 1 and 2 of the 1998 NBA Finals while the team was in Salt Lake City. And in the 1997-98 regular season, Jordan had to even go get Rodman from his Vegas hotel room, after Rodman didn’t return to the team on time. Jordan explains this story more on Sunday night’s episode of The Last Dance (via Yahoo! Sports):

“When Scottie was out, Dennis was a model citizen, to a point where it was driving him [expletive] insane,” Jordan said on “The Last Dance.” Rodman convinced coach Phil Jackson that he needed a vacation to “let loose” and was given permission to head to Las Vegas for 48 hours.

“There’s a knock on the door and it’s Michael Jordan,” Rodman’s ex-wife, Carmen Electra, said. “I hid. I didn’t want him to see me like that so I’m hiding behind the couch with covers on me.”

But Rodman skipping the pre-Game 4 practice particularly didn’t go over well with his teammates. Here are quotes from Michael Jordan, Scottie Pippen, Luc Longley, as well as head coach Phil Jackson, via the South Florida Sun-Sentinel:

“You get tired of it,” center Luc Longley said. “It’s a shame something like this happens during the Finals.”

Said Scottie Pippen: “We’re used to it. It’s the wrong time of the season to take the focus off what we’re trying to accomplish. . . . He’s going to come to practice [Tuesday) and have some lame excuse. All you can do is just deal with it. We want him to show up and play, but we want him to practice, too.”

Said Michael Jordan: “Dennis comes with a lot of baggage. How long the organization accepts it depends. But we know when he steps on the court he always gives 110 percent.”

Bulls coach Phil Jackson said Rodman phoned during Chicago’s shootaround. “He said he got up late, his alarm clock didn’t work, and he didn’t think he’d be here in time,” Jackson said. Jackson noted it wasn’t a formal practice, but that didn’t make his absence less troubling.

And more from Jackson and Pippen, via The Washington Post:

“I talked to Dennis and he did not speak,” coach Phil Jackson said. “He said to my assistant trainer he didn’t think he could make it down here in time for the press conference. I asked him, ‘Dennis, what should I say to the press?’ and he hung up on me.”

Utah star foward Karl Malone had 21 points, but did almost all of the damage with Longley guarding him. Rodman used his unparallaed energy and tenacity to shut Malone down, with Malone only scoring vs Rodman on a long two with the game basically over in the final seconds. This is a beautiful example of why Rodman was named to the NBA All-Defensive First Team seven times.

Rodman did his usual thing on the boards, pulling down 14 rebounds. And he even hit several key free-throws down the stretch, going 6-of-8 overall from the charity stripe (despite shooting just 55% from the line on the season).

The criticism of Rodman from the hours entering the game turned into praise postgame, like from his head coach. Via The New York Times:

”The much-maligned Dennis Rodman had a wonderful game tonight,” Bulls Coach Phil Jackson said, less than 48 hours after the wayward power forward skipped practice to join Hulk Hogan in Detroit at a professional wrestling show. ”He redeemed himself. His defense on Karl was great. Dennis did a job on him.”

And Jordan summarized it perfectly (also via The New York Times):

Jordan said: ”I can never figure this guy out. I won’t even start. One day he’s wrestling, the next day he’s defending. We have come to live with it and don’t try to dissect him as an individual, but somehow he’s always ready to play the game of basketball, and especially when the time is really of the essence.”

Rodman was the ideal player to complement Jordan and Pippen, even if he had a tendency to drive them crazy in the process. He understood his role: do whatever it takes to acquire the basketball off the boards and on loose balls, play high-energy defense, get in the other team’s head, and let Jordan and Pippen do their thing on offense (and occasionally clean up the scraps on offense).

Rodman bullied Malone throughout the series, and played a huge part in Chicago winning their sixth NBA title (which they did two games later, in Game 6). And it’s very fitting that the Rodman-Malone rivalry carried over to…. yep- pro wrestling. Rodman and Malone participated in the WCW “Bash at the Beach” just a month after the 1998 NBA Finals ended.

Related: (Quiz) How well do you remember the Chicago Bulls dynasty?