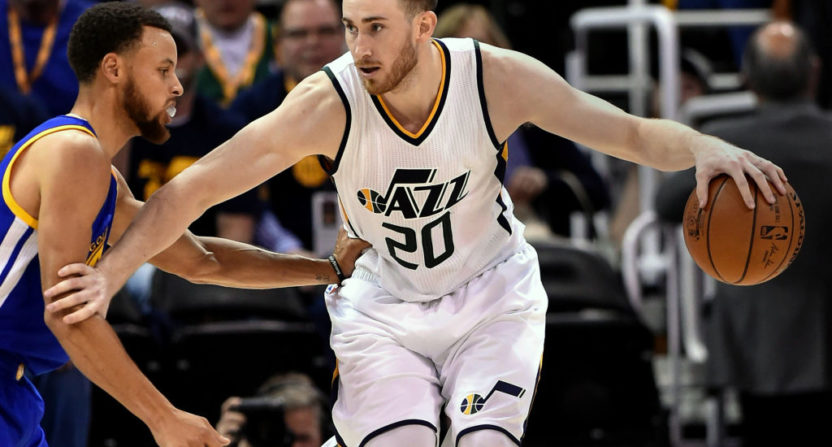 The Jazz lost their golden boy when Gordon Hayward decided to sign a max deal with the Celtics on Tuesday. But maybe Utah can get something out of this before it’s all over.

Here’s the thing: as the roster currently stands, the Celtics don’t have nearly enough salary cap space for Hayward’s 4-year, $128 million deal. So, according to ESPN’s Ramona Shelburne and Adrian Wojnarowski, have already spoken to several teams about trading Marcus Smart, Jae Crowder or Avery Bradley.

The Celtics already cleared up some cap space by letting go of Kelly Olynyk, and they may to do the same with a few more role players and reserves. But, as Shelburne and Woj detail here, they’d still need to do more than that to make room for their new All-Star:

But even if the team renounced the rights to Jonas Jerebko, James Young and Gerald Green, waived Jordan Mickey, left 2016 first-round pick Guerschon Yabusele in Europe this season and traded Demetrius Jackson’s partially guaranteed contract and Terry Rozier, Boston would have $29,444,533 to sign Hayward, which is still about $300,000 short of his max.

The Celtics could go a few different ways here. Bradley and Smart are entering the final year of their respective contracts, which gives an incentive to trade them now instead of waiting and potentially losing them for nothing in free agency next summer. But they also serve a greater purpose on the Celtics’ current roster as two-way guards who can help cover up point guard Isaiah Thomas’ defensive ineptitude. Plus, someone’s gotta guard Kyrie Irving in the inevitable Eastern Conference Finals rematch.

Even though Crowder has three more years on his deal, the Celtics are pretty well-covered on the wings. They just signed Hayward, one of the best wings in the game, and they have a pair of promising youngsters at the position in second-year Jaylen Brown and rookie Jayson Tatum, who they just drafted with the No. 3 pick in June. As the Celtics look to develop those guys, we could expect Crowder’s minutes to not only take a dip in 2017-18, but continue declining over the course of his current contract.

So here’s where the Jazz come in. According to the Salt Lake City Tribune’s Tony Jones and Aaron Falk, the Jazz are open to a sign-and-trade involving Hayward. Or as they cleverly tagged it, a “sign-and-tradeward.” The catch is the Jazz want Hayward to agree to such a move and get the process started.

Not only does Crowder seem like the best trade option for the Celtics, but that’s also who the Jazz are interested in, according to Jazz analyst Spencer Checketts, and Woj himself:

Target for Utah in scenario is Jae Crowder. With everything Hayward and Bartelstein have done, making this happens is the least they can do.

Put aside the cringe in this tweet for a sec — the Celtics don’t owe the Jazz a thing, no matter how many Hayward jerseys get torched in Salt Lake City. That’s definitely a deal that could work, but Celtics general manager Danny Ainge won’t just hand over Crowder because he feels bad about taking Hayward, obviously. The Jazz will need to pony up and become the highest bidder by throwing in some additional assets. That’s easier for them than some of the Celtics’ other potential trade options.

For example, the Suns plenty of cap room to take on Crowder, but as a team still in the middle of a rebuild, they’d think twice about sending a future draft pick away for a 27-year-old role player, albeit a very good one on an amazing contract. The Jazz may not hit 50 wins again next year, but they’re a likely playoff team. A draft pick doesn’t matter as much to them, but adding a quality wing like Crowder does (and, again, that contract is so good.)

But in the end, Hayward would have to be the one agreeing to the sign-and-trade, and if he doesn’t think the potential deal leaves enough talent in Boston, he’s not likely to do it.