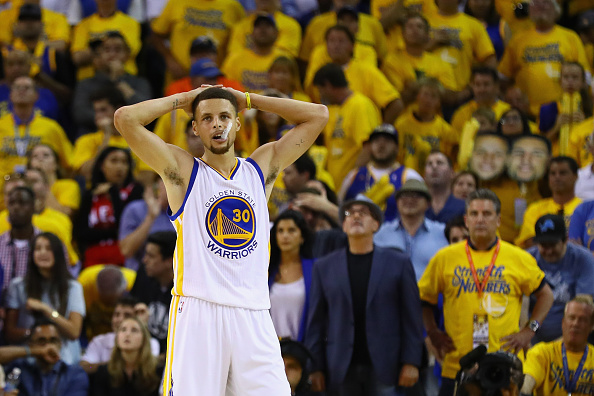 Last week, in the first installment of classic NBA games, ESPN showed Games 5 and 7 of the 2016 NBA Finals. Those were the games in which LeBron James led the Cleveland Cavaliers on a comeback from 3-1 down against the 73-9 Golden State Warriors. Those Warriors hold an interesting place in our memories. They were historically dominant, and trend-setting, but they did not win it all.

Led by a unanimous MVP in Stephen Curry, they are arguably the best regular season team ever. Coach of the Year Steve Kerr wielded the original Death Lineup: Curry, Klay Thompson, Harrison Barnes, Andre Iguodala, and Draymond Green. Green was the heartbeat on defense, nearly winning Defensive Player of the Year, and the Splash Brothers reigned fire around him. They’re the only team in league history to go the entire regular season without being beaten by the same team twice.

The NBA in 2016, though, was uniquely rife with elite teams. The Spurs won 67 games in Tim Duncan’s final year, finishing with a better net rating than the Warriors. The Thunder won 55 games, with Russell Westbrook and Kevin Durant both vaulting into the top five of MVP voting. LeBron’s Big Three Cavs won 57 games.

Golden State famously fell behind 3-1 in the Western Conference finals against the Thunder, only to storm back and win in seven. That was an OKC team that had beaten the 67-win Spurs in the previous round. The Western Conference was good that year. There aren’t many seasons in NBA history with as many really, really good teams as there were in 2016. The Warriors, even in their status as innovating world-beaters, almost bowed out in the conference finals.

Cleveland probably wasn’t as good a team, on paper, as any of those three Western Conference juggernauts. They ostensibly had a big three with LeBron, Kyrie Irving, and Kevin Love, but Love spent many possessions jogging up and down the court in the biggest games. He shot 38 percent from the field in the 2016 playoffs, and only scored double-digit points in two Finals games. He was useful as a floor-spacer, and did come through in Games 5 and 6 of the conference finals against Toronto, but he didn’t always look like a true third star. This Cleveland team was not especially deep (Matthew Dellavedova and Iman Shumpert led bench units), and relied heavily on LeBron and Kyrie.

When it came down to the biggest minutes, the Cavs came through and the Warriors didn’t. Curry, in those final three games, couldn’t find his shot. In Games 5 and 6, he shot uncharacteristically poorly, going 8-for-21 and 8-for-20 as Golden State lost by 15 and 14. He managed just 17 points in Game 7 on 6-of-19 shooting, struggling to find his shots in a difficult fourth quarter. The pace slowed down, and the Warriors’ whirring offense couldn’t create the same space they once were able to. Love shut Curry down on a late fourth-quarter switch. Green took on a bigger offensive role, and while he had a great series (barring the infamous Game 5 suspension), he could not reach MVP levels on that end.

LeBron, with big contributions from Kyrie (whose late Game 7 three-pointer is one of the big shots in league history), lifted the Cavs above and beyond. The 2016 Warriors have to reconcile a status as the all-time team that couldn’t finish the job.

This is not to decry that Golden State team as a failure, or to diminish their legacy. The Curry MVP Warriors are perhaps the most important team in league history, for their transcendent shooting, spacing, and ball-movement. They set the league on a course of three-pointers and rapid pace. Curry’s gravity and shot-creation is one of the most impressive stylistic innovations the NBA has ever seen.

Still, they ultimately lost in the most important games of their season. The conference finals had already shown they were vulnerable, perhaps more vulnerable than we might expect from a team that won 73 games. In the Finals, they floundered in the final three games. An increasing reliance on subpar players, as a result of Green’s Game 5 suspension and an injury to Andrew Bogut, dragged the collective down. Anderson Varajao ended up playing meaningful minutes. Barnes, a reliable starter throughout the year, struggled late in the series.

The best teams in NBA history — those that would challenge the Warriors for best regular season ever — usually win the championship. The Bulls, of course, were 6-for-6. Golden State will go down in history as the team that won 73, setting a record that will be very difficult to break. Of the 13 teams in NBA history that won at least 67 games, nine went on to win the championship.

Part of the difficulty in evaluating the 2016 Warriors historically is that their reputation overall feels incomplete. In 2015, they beat an injured Cavs team in the Finals. That year, LeBron somehow stretched the series to six games despite being without Irving for the final five and Love for the whole Finals. After losing in 2016, they signed Kevin Durant, and became the most unbeatable team in NBA history. They were a guaranteed championship for two years, and while the Rockets came remarkably close, there was no beating them. Injuries ruined them in 2019.

The legacy of the 2016 Warriors is part innovation, but also part LeBron fodder: they’ll go down as the giants that the GOAT took down in his biggest, career-defining achievement. That is a complicated legacy, of success and failure.

Curry, who could not come through in those final three games, will forever take criticism for his Finals performances. Much of that criticism is not legitimate. For his Finals career, he’s averaged 26.7 points per game on 58.9 percent true shooting. He should’ve won Finals MVP over Iguodala in 2015. But 2016 is notable for Golden State’s collapse, and things got much easier with Durant around for the next three years.

When the NBA comes back, we should get to see a healthy Golden State (without Durant) again. Perhaps then we can reevaluate. For now, we have the complicated 2016 legacy, of 73-9 followed by 3-1.