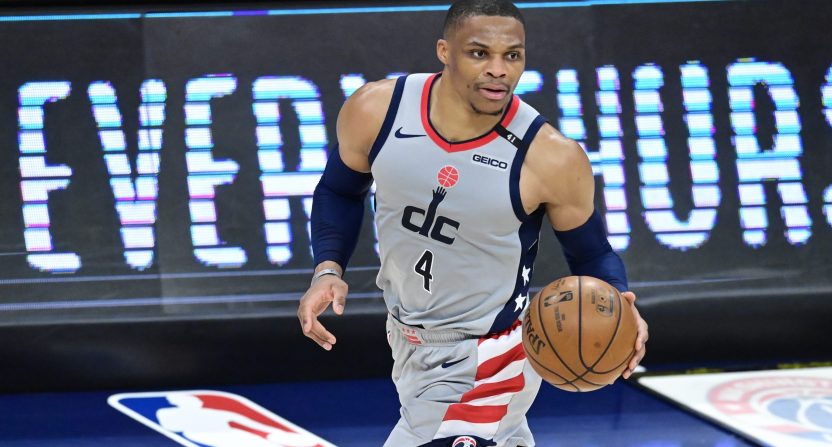 You might need a game program, or at least a refresher course to figure out who’s on the Los Angeles Lakers’ roster these days.

In less than a week, the Lakers have undergone an aggressive overhaul. This is what happens when a defending champion is ousted in the first round of the playoffs. Welcome home, Russell Westbrook! Welcome back, Dwight Howard! How are you doing, Carmelo Anthony? Say hello to these new kids: Malik Monk and Kendrick Nunn!

The Lakers can put five future Hall of Famers on the court: LeBron James, Anthony Davis, Westbrook, Anthony, and Howard (Yes, Howard. Don’t argue with us!).

We’ve joked that James is the shadow general manager of any team he’s on. If so, he and actual GM Rob Pelinka deserve credit for assembling the most interesting team of the 2021-22 season. The boldest move is adding Westbrook.

We’ve never seen a player like Westbrook before. He’s the most athletic point guard in NBA history. Unprecedented and, at times, unstoppable. But at 32, he’s not the man he used to be.

Westbrook has gone from the 2017 MVP to a bit of a novelty act. A high-usage, poor-shooting triple-double machine and fashionista who’s not an easy person to integrate into your offense. Westbrook is on his fourth team in as many years, and it’s a homecoming for the UCLA alum and Long Beach native.

He joins a team that’s built to win now. The Lakers might have repeated as champions if not for injuries to James and Davis. Now, with the benefit of a longer off-season of rest and adding a third All-Star caliber player to the roster, L.A. is the favorite come out of the loaded Western Conference to reach the NBA Finals (the Brooklyn Nets, who also had their own injury issues, are the overall favorite).

If Westbrook is your third-best player, your team is a contender. However, this is still a curious move. Westbrook is a ball-dependent wing who’s a career 30.5-percent three-point shooter, one of the worst in league history by volume.

But bringing a motivated Westbrook on board is a risk worth taking. This is probably Westbrook’s best chance at finally winning a championship. If he accepts a diminished role, this can work. If he’s out there hunting for triple-doubles, this gamble has the potential to be a colossal failure for a guy who’s hoping to rewrite the narrative.

For a while, Westbrook was the face of the post-Kevin Durant Oklahoma City Thunder.

After Durant left to chase a championship with the Golden State Warriors in the summer of 2016, Westbrook stayed. He won the MVP and eventually signed a max five-year, $205 million extension. At that time, it was the biggest guaranteed contract in NBA history. It looked like he might finish his career there. But life comes at you fast. The NBA game continued its three-point evolution and the talent around Westbrook eroded.

Now, like Durant, Westbrook is in pursuit of a title. However, unlike Durant, Westbrook is no longer near the top of the sport. Last year, his lone season with the Washington Wizards, marked the first time since 2014 that Westbrook was not an All-Star. His player efficiency rating (19.5) was his lowest in over a decade. His win shares (3.7) were his lowest since his rookie year (1.9). He set career-worsts in turnover percentage (18.0) and free-throw percentage (65.6). In the playoffs, he shot a horrific 33.3 percent overall in a five-game first-round loss to the Philadelphia 76ers.

Those numbers suggest that Westbrook is in decline. But with the Lakers, his role will be different.

How can he help? Westbrook can ease some of the ball-handling and play-making burden from LeBron. Last season was the fifth straight year that James’ minutes per game declined. His once indestructible body has been more susceptible to injury lately. In James’ final stint with the Cleveland Cavaliers in 2017-18, he played all 82 regular-season games. Last year, he appeared in a career-low 45 games over a 72-game season.

Westbrook can still initiate offense and creating scoring opportunities for others. He has led the league in assists per game three out of the past four seasons. The one year he didn’t was 2019-20, when James was No .1. Westbrook also gives the Lakers another player who can both start the fastbreak and finish it as well as anyone in the NBA.

Westbrook needs the rock in his hands to be effective. However, he did show more of a willingness to share last season with a usage rate of 30.2. That’s a big drop from his MVP season usage rate of 41.7.

The second problem is Westbrook can’t shoot. This might not be an issue in the regular season, but it could be a major hindrance in the playoffs when teams have more time to game-plan.

Over his past 13 postseason games, Westbrook is 13-of-53 from beyond the arc.

That’s not his strength and not his job. L.A. is hoping that the additions of Monk, Anthony, Nunn, Wayne Ellington, and Kent Bazemore can improve their perimeter shooting (the Lakers ranked No. 23 in three-point percentage at 34.9) and create space.

It will be up to Westbrook to take advantage of one-on-one opportunities. Defenses will gravitate to James and Davis. That should allow Westbrook to do what he does best: attack in the open floor. This is the best situation he’s been in since helping the Thunder reach the 2012 NBA Finals.

The pressure is on. Now it’s up to Westbrook to prove he can play championship basketball.