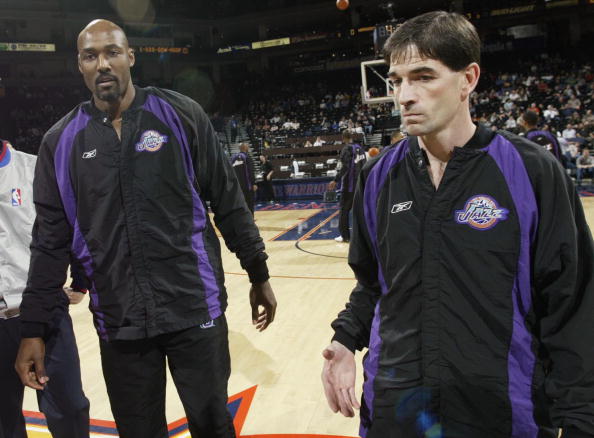 NBA history is marked by dynasties. From Russell’s Celtics to Bird and Magic to Jordan’s Bulls. More recently, you could classify Duncan’s Spurs and even Kobe’s Lakers in that category as those two franchises have accounted for 10 of the last 17 NBA championships.

With those titles being localized to the elite few, that means there have been many unfortunate souls on the other side of history. When looking at the most tortured playoff teams in NBA history, there are almost too many good candidates to try to narrow the list down to five.  But do so we must, because we’re bound by the listicle laws of the interwebs.

So here they are, the five most tortured teams in NBA Playoffs history…

Any list of the most tortured franchises in the NBA when it comes to the playoffs has to include the Clippers by default. For decades, the franchise was a laughing stock — not just in the Association, but all of professional sports. And yes, while it might be more torturous to get there often, or get so close to a title and fall short… you can’t say Clippers fans haven’t been through their fair share of pain and misery.

Forty-six seasons. Just 12 lonely playoff appearances. And the biggest dagger? The franchise has never even reached a conference final in their existence. The Clippers have had a golden age recently with Chris Paul, Blake Griffin, and Doc Rivers, but even this group of All-Stars seemingly can’t get the franchise over the hump.

I can cheat, right? OK, I’m cheating because it was just too difficult to leave out one of these franchises because their histories are so similar.

Both have called multiple cities home throughout their lengthy histories in the NBA. The Kings started out as the Rochester Royals, then traveled west to Cincinnati and Kansas City before finally landing in California’s capital. The Hawks started as the Tri-Cities Blackhawks out of Moline, Illinois, then moved to Milwaukee and St. Louis before ultimately calling Atlanta home.

The Kings and Hawks also share this in common: They both have just one title in at least 66 years in the NBA. And the last title between them came in 1958.

That’s right, neither Sacramento or Atlanta have seen a championship. The Rochester Royals won it all in 1951 and the St. Louis Hawks got their lone victory in four NBA Finals series against the Celtics in 1958. Maybe if there’s a tiebreaker here, the Kings can be blamed for leaving three cities championship-less so far.

Recently, the Hawks just ended a 44-year streak of not making the conference finals in 2015 — where, of course, they were easily swept aside by the Cavs. The Kings had a 20-year conference finals drought come to an end in 2002, and we all know how that turned out. OK, maybe the Kings do have the edge here because any time you can easily point to a conspiracy theory against your team, that’s pretty torturous.

At least the two teams above have championships. The Cleveland Cavaliers do not. And by Internet List Making Law, any list that involves tortured fanbases has to include Cleveland. And you can’t argue with the fact that the Cavs have certainly earned it over time, even before the LeBron James Era.

The Cavs belong here based on just what’s happened with LeBron, though, because after decades of futility, they’ve been oh-so-close to winning that elusive first ring. And it’s even more painful that Cleveland fans got to see LeBron take his talents to South Beach and win two titles while they are still left empty-handed. That’s a special kind of pain.

The Cavaliers have had at least one Finals defeat in both of King James’ reigns in Cleveland, getting swept in 2007 by the Spurs and going down valiantly last year to the Warriors. This year, they’re only two more wins from a third Finals appearance, which could finally take them off this list.

The Utah Jazz had two of the best players in NBA history on their side for well over a decade together: John Stockton and Karl Malone. And they have zero championships to show for it. Their 114 playoff victories are second only to the No. 1 team on our list when it comes to most postseason wins without a championship.

In fact, from 1984-2003, the Jazz made the playoffs in 20 consecutive years, good enough for fourth all-time. Here’s the stage that they exited the postseason in those 20 years:

Those two Finals appearances were particularly grueling for Jazz fans, going up against the last two years of Michael Jordan’s Bulls dynasty. At least they can have a justified gripe that MJ pushed off on his shot over Bryon Russell.

There’s a lot of debates across sports over the “Best Team to Never Win a Championship,” but it’s hard not to put Stockton and Malone’s Jazz at or near the top of the list given their greatness and longevity.

One hundred thirty-three playoff wins. Nine conference finals appearances. Two NBA Finals appearances. Zero NBA Championships. You might not realize it, but the Phoenix Suns are far and away the most tortured NBA team in history when it comes to the postseason.

Their 48 seasons without an NBA Championship is the longest drought in the Association. In fact, you could probably win a lot of bets with the factoid that the Suns have the fourth-highest winning percentage as a franchise in NBA history (only behind the Spurs, Lakers, and Celtics).

What makes the Suns’ playoff history so tortured is that they’ve been so close over so many different eras.

In 1976, just eight years into their existence, they lost the Finals in six games to the Celtics, including what may still be the greatest game in NBA history.

Then came another peak during the early-90s with Charles Barkley and Kevin Johnson. Like other teams on this list, they immediately ran into Michael Jordan and the Bulls at the top of the mountain in the 1993 Finals. Or, should I say, John Paxson.

The Suns again peaked in the mid-2000s with the exciting combination of PG Steve Nash and head coach Mike D’Antoni. They won the Pacific Division three consecutive seasons from 2005-2007 and Nash won two MVPs. Unfortunately, they failed to make it past the conference finals in each of those seasons. One last run in 2010 saw them reach the conference finals for a ninth time in franchise history, only to lose once again.