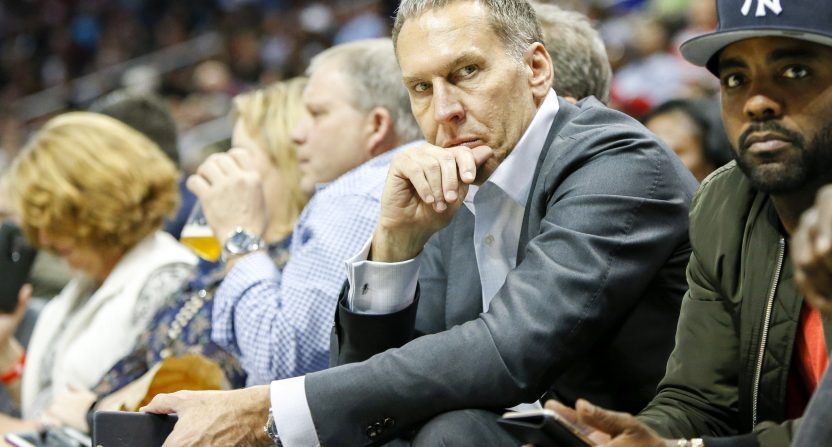 There’s no way Bryan Colangelo survives this, is there? The tone of the latest Woj report seems to suggest that’s the trending thought among people within the organization. The internal probe has apparently wrapped up, and ownership reportedly met last night to discuss the next steps.

The Philadelphia 76ers’ ownership group, including CEO Scott O’Neill, met for several hours in New York on Tuesday evening to discuss whether the findings of a probe into president of basketball operations Bryan Colangelo necessitate his firing, league sources told ESPN.

A decision could be reached as soon as Wednesday, league sources said.

The Twitter accounts seem pretty clearly to be linked to Colangelo’s wife, and the team is apparently considering that to be just as bad as if Colangelo himself had done it, which is probably the right way to go about it:

Colangelo has professed no knowledge of his wife’s alleged year-plus of unleashing privileged information and attacks on Sixers players, coaches and former and rival executives, sources said. The Sixers ownership is struggling to separate Colangelo from his wife, if she indeed posted those remarks.

Regardless of what happens, Woj also notes that the team will likely pitch free agents with a focus more on newly-extended head coach Brett Brown than either Colangelo (if he somehow survives) or a new executive:

Regardless of Colangelo’s future, the Sixers are prepared to make coach Brett Brown front and center in the July free-agent presentations, league sources said. Brown has constructed a tremendous reputation among NBA players, and he played an integral part in the 76ers’ free-agent acquisitions of JJ Redick, Marco Belinelli and Ersan Ilyasova. The hiring of Monty Williams, a former Team USA assistant, as his lead assistant coach also will be impactful in free-agent conversations. Williams has strong relationships with star players throughout the league.

That obviously makes a ton of sense. There’s no way you can send Colangelo into a meeting right now as anything resembling the face of the front office. And it’s so hard to see him keeping his job at all; how could any of the players believe a word he says again? Joel Embiid probably has five tweets ready to go dunking all over Colangelo and his wife on the way out the door. We’re also still learning new ways this may have screwed the Sixers, with The Athletic reporting this morning that the accounts may have tipped Philadelphia’s interest in Mikal Bridges and Miles Bridges for their 10th overall pick.

This is truly a stunning sequence of events, especially considering Colangelo was only there because the league got mad at Sam Hinkie and nudged Sixers ownership towards bringing him on board. How’d that particular heavy-handedness work out for the NBA? It’s also a fun reminder that just because someone has a respected job, it doesn’t mean they’re not capable of doing some ridiculously dumb shit.

You’d think we’d have all learned this lesson already.