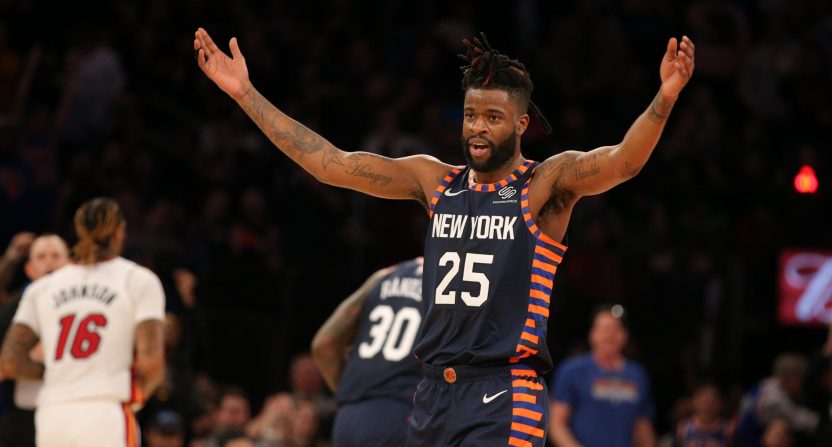 The hardest task in the NBA is finding a foundational player. Teams can languish for years in search of one, and even if you find a star, you’re unlikely to find one good enough to be the true best player on a championship team. Unless you build a winning culture that coaches well and produces internal development, you’re stuck in a perpetual search.

Randomness is just as much of a factor in that search as drafting and developing. If you don’t happen to be located in an attractive market, you can only hope to perform well in draft lotteries and hit on picks. Look around at the current list of NBA stars, and there is a good amount of variance in who was able to grab them. Giannis Antetokounpo and Kawhi Leonard were mid-round draft picks. Jimmy Butler and Nikola Jokic came even later. Others like Luka Doncic and Joel Embiid were chosen with high lottery picks.

The teams that mined those talents obviously deserve credit for unearthing and then developing them, but for a team that doesn’t have a centerpiece star to build around, the task is not easy. Counting on the lottery is a fool’s errand (unless you’re David Griffin). There isn’t an easy gameplan for finding your guy.

Add any combination of unsatisfactory contracts, unpromising young players, and lack of team identity, and the task grows even more difficult. For a handful of NBA teams, the future is murky at best, and until they find their centerpiece, they might continue treading water.

In this article, I singled out Detroit, New York, and Charlotte as examples of teams with murky futures. I could easily have chosen Cleveland, Washington, Sacramento, Minnesota, or Chicago as well.

Let’s take a look at our chosen three, and how they may try to get out of their current situations:

When Detroit pulled the trigger on the Blake Griffin trade in January of 2018, they had to know they were risking long-term mediocrity. Griffin was a 28-year-old with a significant injury history. He gave them an All-NBA third team season and a playoff berth, but he ended up sidelined against the Milwaukee Bucks in the first round, securing the Pistons’ place as a middle-of-the-road team with no path to greater heights. Griffin is now 30 and has significant injury issues, out indefinitely with a knee issue.

Griffin’s contract is tough to trade, and Detroit probably wouldn’t recoup enough assets to make a deal worth it. He’s due significant money through 2020-21, with a player option for 2021-22. As good as he might be when healthy, we don’t know when Griffin will fully recover from this latest injury.

It might be easy to say he doesn’t fit the Pistons’ timeline, but it’s hard to pinpoint what exactly their timeline is. Without much of a young core to speak of, the Pistons should dive into an actual rebuild, as Michael Pina recently outlined for SB Nation. Trade Andre Drummond, who is reportedly declining his player option this summer, and start building up the younger guys.

The key for the Pistons is breeding a system that has more of a direction, and strives for more than mediocrity. Running the offense through Drummond, a traditional center whose primary role is gobbling rebounds, was never going to propel them to greater heights. They have to build up their guys, be content with losing a for a bit, and hope they stumble upon a centerpiece.

They have some interesting guys as it stands. 23-year-old Luke Kennard is a productive secondary option on offense. He’s shooting 46 percent on catch-and-shoot threes this season and knows how to attack defenses on closeouts. Bruce Brown, also 23, hasn’t been as productive as Kennard on offense, but he works hard on defense and has displayed promising athleticism. Sekou Doumbouya, just 19, arrived on the scene recently as a solid defender and guarded LeBron James and Kawhi Leonard on the Pistons’ recent LA trip.

In addition to Drummond, they could try to recoup assets for players like Derrick Rose, who runs Detroit’s offense a lot of nights, and Langston Galloway, who is shooting 40 percent from deep on an expiring contract.

Starting a rebuild process is not ideal for a team that has tried desperately to stay afloat in the last half-decade or so. Teams that initiate revamps by trading stars for major assets — notably the Thunder and Pelicans — have an upper hand. No such luck for the Pistons, who are pretty much stuck with Griffin.

There are ways to make rebuilds feel promising and worthwhile. Play fun basketball, and find fun players. Draft well. Detroit will have to lean into it.

The Knicks, as you may have heard, did not have much success this summer in the free agent market. They ended up firing coach David Fizdale earlier this season after a disastrous start, and are now enduring another season based around development, opportunities for young players, and losing.

New coach Mike Miller simplified the scheme and helped the Knicks perk up over the past couple of weeks. They went on a three-game winning streak after Christmas, and they lost by only three to the Clippers on January 5, putting up 132 points against one of the league’s best defenses.

Despite this recent optimism, the Knicks are still languishing at 11-29, second-to-last in the Eastern Conference. There is no star player to build around. They had one, but Kristaps Porzingis is excelling in Texas now. It feels like the Knicks are stuck in a constant holding pattern, maintaining hope that they will have a chance at a marquee free agent while enduring wasted seasons in the meantime.

In that way, it is a dismal outlook. No one really has much confidence in the existing organizational structure. When you’re building around young players who aren’t already sure things, there is vast uncertainty, and it’s hard to know what your timeline looks like. You don’t know if you already have your main guy.

Right now, the young core looks like this: RJ Barrett, Mitchell Robinson, Kevin Knox, and Frank Ntilikina. You could add Dennis Smith Jr. or Allonzo Trier in there, but Smith has had a rough injury-riddled year and Trier has barely played. Their best players have been Marcus Morris Sr., who will likely be traded to a contender before the deadline, and Julius Randle, who hasn’t emerged as the high-usage All-Star some thought he might.

Barrett is the prized third-overall draft pick. With a true shooting percentage of 46 percent — fifth-worst in the league — he has had some growing pains early on. His field goal percentage of just 52 percent at the rim indicates that he will have to become more comfortable finishing in traffic. There have been positive signs for Barrett, though. He has a good offensive sense, and his rebounding rate (5.9 per 36 minutes) is above-average for his position.

Robinson is a lengthy big man who makes most of his shots — he leads the entire NBA in true shooting percentage though it helps that he rarely shoots from outside and hasn’t taken a single three all year. Robinson also makes an impact as a defender, contesting shots with his athleticism and blocking the ninth-most attempts per 36 minutes in the league.

Knox’s time of play has fluctuated, and when he has, he hasn’t had a big role in the offense. Ntilikina has a very low usage rate for a point guard, at just 15 percent, but he has shown some promise on offense to go along with his plus defense.

There are interesting pieces in New York. They will hope Barrett grows into a legitimate No. 1 option down the line. But there is little certainty, and no sign that they’re going to emerge as a contender any time soon, barring an unlikely free agent coup.

Entering this season, the Hornets were considered one of the worst teams in the league. They had just let Kemba Walker leave for nothing and overpaid Terry Rozier to replace him. The younger guys on the team didn’t inspire confidence; the years of mediocrity hadn’t given them much in the way of high-potential draft picks.

Things haven’t been as bad as expected. Coached by James Borrego, they’ve been a threatening team on most nights. They’ve played in 13 games that have been decided by three or fewer points, the most in the league (they’re 8-5 in such games).

Devonte’ Graham, out of nowhere, has become a fringe All-Star and candidate for Most Improved Player, taking Rozier’s projected role as first offensive option. He improved his three-point percentage by 10 percent, and he collects the assists you would expect from a high-usage point guard — almost 11 per 100 possessions. Inconsistent shooting performances hurt his field goal percentage though.

While there are other promising parts of this team, including PJ Washington’s rookie year and Malik Monk’s high-speed shot creation, it’s hard to pinpoint the building blocks in Charlotte. Graham seems like one, though he’ll have to become more efficient. Miles Bridges can’t get by on poster dunks (his 35 percent mark from 3 is one positive). Rozier is locked in on an expensive contract. Monk, while exciting, is a gunner at best.

Borrego has made sure that the Hornets are organized and prepared. They compete on defense, and stay in a lot of games that way. But of the 15 players who have played minutes for Charlotte this year, just three (Graham, Rozier, and Cody Zeller) are above the negatives in Offensive Box Plus/Minus. The pieces, for the most part, aren’t there. It’s hard to see how they acquire those pieces.

Thus, the root of any depressing team: There is no clear path out. At some point they should stumble upon some savior, but there is no guarantee. Even good culture, which Borrego seems to be establishing in Charlotte, only goes so far.