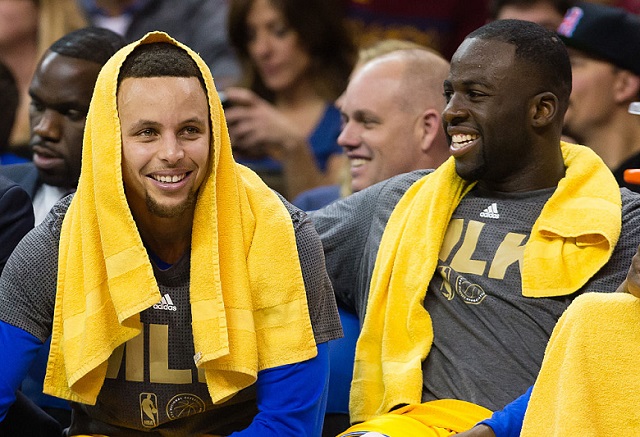 You can’t consume sports media these days without hearing vociferous debate on whether Steve Kerr should rest his Golden State Warriors starters rather than go after the NBA record for wins in a season.

The irony is that for those of us who actually watch all the games, it’s a moot point.

Before I explain that statement, let me make clear that I believe the Warriors are all-in on this record chase, and that those three players would be logging their usual 30-35 minutes per game regardless of any other circumstance. Great teams do great things, and the Warriors believe they’re a great team. They also know from experience that once the playoffs actually start, the schedule is less frantic than the regular season, so they’re not all that worried about what happens once they get to the postseason.

I understand why the debate is so attractive. For one thing, the Warriors have taken just about everything else off the table in the last few weeks. They’ve pretty much got the West’s top seed sewn up, and after the Houdini act they pulled in Utah Wednesday night, it’s hard to see them dropping three of their last seven games to miss the 1996 Bulls’ 72-win mark.

Then consider the dance the Warriors and San Antonio Spurs have been doing all season long. The Spurs have put together their own great season, undefeated at home and with a shot at 70 wins, yet the Warriors have managed to just barely elude their grasp all season. Spurs coach Gregg Popovich is considered the Godfather of Resting Players. Significantly, he and Warriors coach Steve Kerr are probably as close as any two coaches in the NBA.

It’s natural, therefore, to start to wonder why Kerr is not following his mentor’s lead on this topic. I get that. What concerns me regarding the current national debate is this: People are not looking at the reality of the Warriors’ situation.

Andre Iguodala is out. He averages 26 minutes per game.

Festus Ezeli is out. He averages 17 minutes per game.

That’s almost one 48-minute lineup spot that’s missing from the Warriors’ rotation right now. That means Kerr has to go to his bench and find 43 extra minutes from that group, or have his starters pick up the slack.

Oh, wait a minute. Brandon Rush banged knees with someone a couple of games ago, and was held out of the game against Washington Tuesday night. Rush, since Iguodala went out of the lineup, has averaged about 18 minutes per game. He played eight minutes against the Jazz on Wednesday, so there’s another 10-minute block that must be allotted somewhere.

Complicating the issue for Kerr is that the Warriors actually have quite a few players who are limited in how many effective minutes they can play. Shaun Livingston, their first guard off the bench with Iguodala out, is an 11-year veteran with a history of leg problems, including a devastating knee injury early in his career. The fact that he’s made it back to play at such a high level is a miracle, but Kerr can’t use him for more than about 20-25 minutes per game.

Andrew Bogut, who starts at center most of the time, has played more than 30 minutes only a handful of times this season, and usually logs between 16 and 28. His body is a little fragile, and I don’t see Kerr using him 35 minutes to try to fill the gaps caused by Ezeli’s absence. The backup center minutes go to Marreese Speights, of whom Kerr said recently, “Marreese has a shelf life. We have to get him out before the expiration date,” and Anderson Varejao, whose days of 30-minute games are long over.

Leandro Barbosa, who provides instant energy and speed off the bench, is a max 20-minute player. Ian Clark, who backs up both guard positions, is an NBA journeyman who is effective in short bursts.

The one player the Warriors are trying to get more minutes for is James Michael McAdoo, but he’s very raw and there are times he’s completely overmatched on the court. There were 265 minutes available in that Utah game, and JMM didn’t get one of them.

The Warriors starters, besides Bogut, are all between 23 (Harrison Barnes) and 28 (Curry), and their minutes are closely monitored all season long. Kerr obviously had to give them more minutes Wednesday night because the game went to overtime, but Curry and Green sat out the first six minutes of the fourth quarter just as they always do, even though the team trailed by 8 points and looked lifeless.

Let’s contrast that reality with that of the Spurs. Their star players range in age from old (Tony Parker, 34) to ridiculously old (Manu Ginobli, 39 this summer and Tim Duncan, 40 this April). Those guys need to skip some games. The Spurs have also recently added several “new” players, meaning that they’re new to the Spurs, but they’re old guys. Andre Miller is a month older than Duncan, and Kevin Martin turned 33 in February. They need to play minutes in the Spurs’ system and knock some of their rust off, so it works for the Spurs to sit their starters once in a while.

Let’s also appreciate that with the Spurs, players lower in the rotation get more minutes not with the primary intent of “saving Parker, Duncan and Ginobili for the playoffs.” The Spurs are what they are, and have become what they’ve become, because Popovich coaches the heck out of his back-end rotation players. When non-star players get minutes, they contribute so that they become fully prepared for the playoffs… and almost always are.

Patty Mills is and will remain a very important player for the Spurs in the playoffs, whether Tony Parker maximizes his minutes or not. Martin, David West, the list goes on — all are going to be needed in an extended series against Oklahoma City and (if the Spurs survive that) Golden State. Pop’s not just intent on saving his most globally-known players; he is cultivating the remainder of his roster, because he’ll need all hands on deck to win the West and the NBA title in the coming months.

As said above, I believe the Warriors would be starting their studs even if you could see sparks shooting up from where their wheels were coming off. They want to set that record, and, by the way, they just hate to lose basketball games — you saw that last night in Utah on the back end of a back-to-back, pushing uphill against a very effective Jazz defense which held the Dubs under 90 points in regulation. If they had a healthy Iguodala and a healthy Ezeli, it might at least give Kerr pause where that’s concerned, but without them, it’s a short conversation in the coaches’ meetings.

The Warriors can not rest — literally or figuratively — until they’ve bagged win number 73.