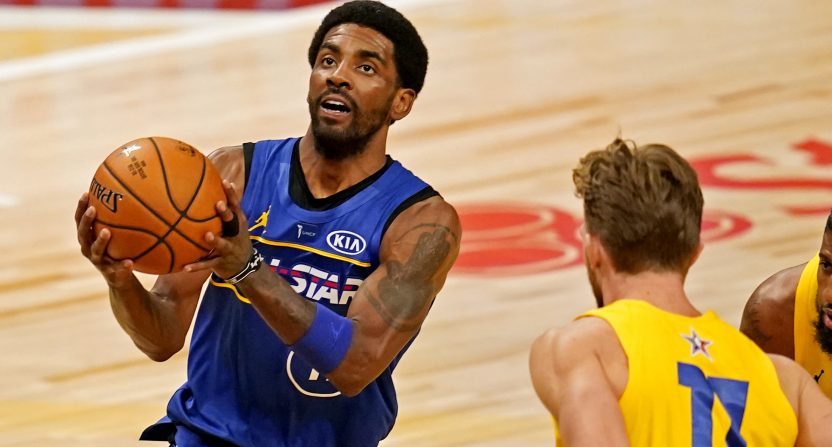 Kyrie Irving is one weird dude. A conspiracy-spreading, sage-spreading oddball.

In a league that has always embraced individualism and entertaining personalities, that’s not necessarily bad. But there’s a fine line between eccentric versus bizarre. Irving has sprinted past the latter as if he were dribbling by a flat-footed defender.

Irving is one of the most polarizing figures in the NBA. Popular with several of his peers and many fans, owning the ninth-best selling jersey in the league. Not so popular with various media members and certain fan bases. Whatever your opinion, be prepared to possibly call him a two-time champion by the end of the season.

Irving owns the top offensive efficiency rating for an unprecedented team. The Brooklyn Nets (24-13), who aren’t even at full strength yet, are on pace to be the most efficient offense in NBA history. They entered the All-Star break leading the league in scoring (121 points per game) and field-goal percentage (50.0).

According to @EliasSports Brooklyn is the 2nd team to average at least 120 points while shooting 50% from the field at the All-Star Break, joining the 1981-82 Nuggets (123.3 PPG on 52% shooting). pic.twitter.com/MhZCAqKCTi

Brooklyn is a game behind the Philadelphia 76ers (24-12) in the loss column for the No. 1 overall seed in the Eastern Conference.

This is terrifying. The Big 3 of Irving, James Harden, and Kevin Durant have only played seven games together. Harden has received a lot of credit for keeping Brooklyn going while Durant sits out with a hamstring issue. But no player has been more impactful on offense than Irving, who leads the NBA in offensive rating. The Nets are scoring 122 points per 100 possessions with Irving on the floor.

Irving is enjoying one of his best seasons, shooting a career-best 51 percent, while making 41.1 percent of his shots from three-point range. He’s averaging 27.2 points per game, the second-highest of his career.

Even more impressive, Irving is within two free-throw percentage points of shooting 50-40-90 for the season. That has only been accomplished by eight players, most recently Malcolm Brogdon in the 2018-19 season for the Milwaukee Bucks.

Love him or hate him, Irving is a vital part of Brooklyn’s drive for a championship. Nobody in the East can match its firepower. According to FiveThirtyEight, the Nets have the best chance of any team to reach the NBA Finals.

Interestingly, their chance of winning it all is only fourth-best, behind the Los Angeles Clippers, the Denver Nuggets, and the Utah Jazz. That’s surprising. Brooklyn is 8-3 against the Western Conference, including that recent 5-0 road swing.

Do you want to bet against Irving, Durant, and Harden?

If Irving wins, he’ll be celebrated in a way not seen since he made one of the biggest three-point shots in playoff history. But since his game-winning basket to shock the seemingly unbeatable Golden State Warriors, his image has taken a turn for the worse. The public perception changed right after he forced Cleveland to trade him to Boston in the summer of 2017.

Why would anyone willingly leave LeBron James?

Kyrie Irving believes Earth is flat and he doesn't want to play with LeBron James. Kyrie Irving might be the dumbest person who ever lived.

Irving angered another fan base by initially saying that he planned to re-sign with Boston. Instead, he left as a free agent to team up with Durant in Brooklyn.

Sports is a business, and Irving has every right to go where he wants. But it seems like Irving goes out of his way to antagonize people. He could have simply said nothing in Boston. But he chose to grab the microphone and address the crowd. You can’t be surprised when the Boston bros get mad at you.

But Irving sees the world differently. After all, he might be a flat-earth truther.

In Brooklyn, one would figure that Irving would be less high maintenance. Oh, no. We figured wrong. Irving continues to push everyone’s buttons. First, there was that ill-advised boycott of the media that ended after the league fined him $25,000. He also called the media “pawns.”

Then, in January, Irving mysteriously went AWOL. During that time, he was captured on video at a party without wearing a mask. The NBA fined him $50,000 for violating its health and safety protocols.

Now since his return, Irving has been spectacular, earning his seventh All-Star appearance. But not even that could be drama-free. Irving skipped a media session on All-Star Sunday. He’ll probably be fined again.

Irving has explained his distrust of the media by describing it as: “someone else’s propaganda” He later added: “My goal this season is to let my work on and off the court speak for itself.”

So far it speaks volumes. He’s been excellent. Appreciate his handles. Appreciate his finishes around the rim. Appreciate his generosity which includes donating $323,000 to Feeding America and buying a home for the family of George Floyd, who died last year at the hands of a Minneapolis police officer.

Irving is both The Most Interesting Man in the World and an enigma. Perhaps we’ll never fully understand him. And maybe he doesn’t want us to.