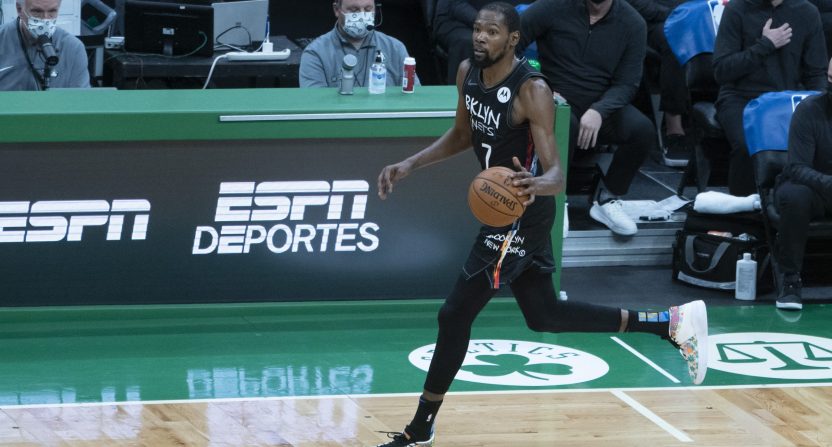 The biggest question the Brooklyn Nets faced coming into this season was how close Kevin Durant was to 100 percent. At his best, he’s a championship contender unto himself. Something less, and the Nets may not have enough to keep up with the best teams.

So far, so good: Durant is tearing it up. He rested on Monday against the Memphis Grizzlies, but in his first three games, he averaged 26 points on 53 percent shooting, making nine of his 13 threes and heating up in the midrange. Durant’s boundless athleticism isn’t quite there (he isn’t getting to the rim as much, although he has drawn plenty of fouls), but he looks capable of being the best player on an elite team. The Nets can be that elite team.

Kyrie Irving, back to his ideal role as the secondary player next to a superstar, is tearing it up right alongside him, and the two have been a deadly duo. Irving has 29 points on 61 percent from the field, including a scorching 56 percent on eight threes per game. Brooklyn dominated the Golden State Warriors to open the season, and then put together an impressive win over the Boston Celtics on Christmas.

In their third game, a two-point loss against the Charlotte Hornets, Spencer Dinwiddie went down with a partially torn ACL, knocking him out for the season. That hurts the Nets in two ways: it robs them of a secondary ball-handler that could play with or without the starting unit; and it potentially lowers the value of any package that they may be able to send for James Harden. Dinwiddie is 27 and will reportedly fully recover, but he has a player option for next season.

Losing Dinwiddie shouldn’t be a killer, though, for a team that has plenty of depth and thrives on star power. In the biggest games, Durant and Irving can compete with anyone. So far this season, Steve Nash has rarely separated his two stars. Other contenders, like the Los Angeles Lakers, stagger their two superstars to avoid getting killed without them on the floor. The Nets have the luxury of putting out a Caris LeVert-led second unit that is capable of staying afloat. Dinwiddie had been a starter who had relinquished much of his on-ball role, spending most of his time as a floor-spacer on offense.

Brooklyn can look to Timothe Luwawu-Cabarrot — who played well in relief of Dinwiddie against the Hornets — as a replacement. The Nets’ secondary talent is multi-faceted, with shooters, defenders, and size. One look to watch in bigger games is a small-ball lineup with Jeff Green at center, taking out both DeAndre Jordan and Jarrett Allen. The flexibility and shooting that provides against teams without a dominant center could unlock easier scoring opportunities for the stars.

Durant is getting to his spots as it is. His unstoppable shooting and size make him a timeless weapon, capable of shooting over anyone and making plays that others would miss. Teams put stout, athletic defenders on him (like Charlotte’s Miles Bridges, or All-NBA defender Jayson Tatum), and Durant has no need to challenge them physically. He can shoot over them, dribbling into a three-pointer or a midrange pull-up.

He can also use his height to see over defenses, finding pinpoint passes:

KD has had underrated vision throughout his career, and while the Nets haven’t seen high-volume playmaking from him yet (with just 3.3 assists per game), he can spray the ball anywhere. As the season goes on and Durant gets more comfortable after 18 months off, the Nets will get more use out of him as a playmaker.

With Irving next to him, the Nets have two players that get constant buckets. Irving is draining everything and finishing some crazy shots at the rim. The give-and-take of Durant and Irving is pretty tough to stop, and all but guarantees that the Nets’ offense won’t go stale with them on the floor. It remains to be seen whether any chemistry issues will arise, but there have been no public tensions so far.

Defense is perhaps the biggest impediment to the Nets making it out of the Eastern Conference. Durant remains an effective defender, but he is understandably reluctant to turn it on this early in the season, and there’s reason to expect that he won’t have the agility to be the true All-Defense force he once was. Irving is a weaker defender, so the most troubling defensive aspect for Brooklyn is on the perimeter, where guards have too easy of a time getting downhill.

This is compounded by the rim protection from Jordan and Allen, two competent defenders who shoulder a big burden. Neither is a dominant force, and neither has enough to make up for lapses on the perimeter.

Still, there’s not too much to be concerned about yet: Durant’s defensive rating is 93.7 through three games. Irving’s is actually better, though the two play nearly identical minutes. When the Hornets pulled away early in the fourth quarter, it was through a barrage of Gordon Hayward jumpers against the second unit. With Durant and Irving back on the floor, Charlotte went cold and the Nets nearly came back from a double-digit deficit.

Brooklyn has the resources to make a move for a player at some point, should it become necessary. Irving has a lengthy injury history, and Dinwiddie would have been the player to step in should Irving go down.

Durant looks good enough to make most of their problems feel irrelevant. With their stars thriving, the Nets are a real threat.