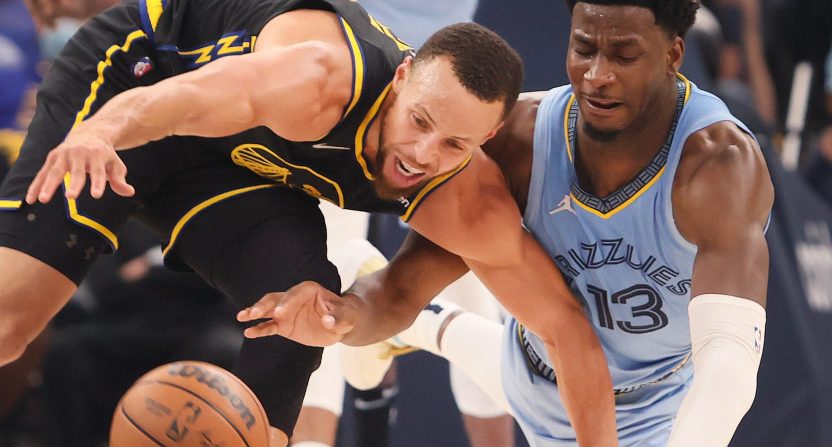 Ahead of Wednesday night’s Game 5, Golden State Warriors star Steph Curry told ESPN’s Kendra Andrews that the team’s gameplan against the Memphis Grizzlies was to “Whoop That Trick.”

What’s the Warriors’ game plan for their close out game in Memphis tonight? Stephen Curry had a simple answer: pic.twitter.com/fgpSkzypsR

“Whoop That Trick” is the Grizzlies’ rally cry, so Curry was not-so-subtlely talking trash with that comment.

Well, Curry and the Warriors didn’t exactly succeed in that gameplan. Rather, it was the complete opposite.

Dray was vibing to "Whoop That Trick" during the Grizzlies blowout 🤣 pic.twitter.com/oXt7GoRx4Y

Game 5 was an even bigger blowout than the score suggests. The Grizzlies led by as many as 55 points. They took a 27-point lead into halftime, and then put together a 42-17 fourth quarter. Golden State outscored Memphis 28-15 in a full-on garbage-time fourth quarter to make the game appear a little closer than it really was.

Do we really need the fourth quarter? This is a beatdown in Game 5. 😂 pic.twitter.com/ICs35BfKLQ

And Memphis did all of this without star guard Ja Morant, who was out with a bone bruise in his right knee. Then again, the Grizzlies went 20-5 without Morant in the regular season, so they’ve clearly shown that they can find a way to win without him.

Here’s a look at how the basketball world is reacting to the Grizzlies’ blowout win:

This how you whoop Dat trick 🤣🤣🤣

The Grizzlies led by as many as 55 points tonight, the 2nd-largest lead at any point of a playoff game over the last 25 years.

The only larger lead came from the 2009 Nuggets, who led by 58. pic.twitter.com/wMk9eDLQpJ

This is an embarrassing loss for the Warriors. It's one thing to get blown out, but by 50 points in a closeout game of the playoffs? There will need to be some serious self-reflection after this one.

no shade to Mike Brown, but the Warriors need Steve Kerr back expeditiously

Whoop That Trick is playing in the arena… the crowd is going wild. And the emcee just said "STEPH CURRY IN YOUR FACE, WHOOP THAT TRICK".

The Warriors certainly want to do everything possible to close the series in Game 6 at home on Friday night. If not, the series will return to Memphis for a Game 7, which would be next Monday night.