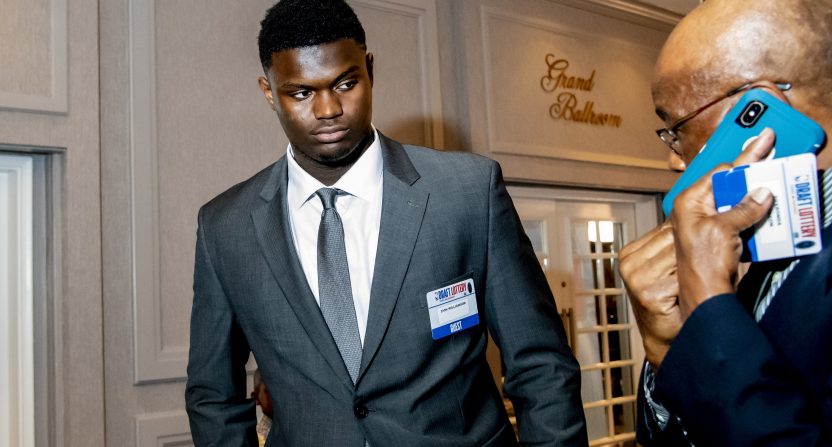 After winning the NBA Draft Lottery on Tuesday night, there is a 99.99999% chance that Zion Williamson will be playing for the New Orleans Pelicans for at least the first few years of the most hyped NBA career since LeBron James.

In the immediate aftermath, the jokes and takes were firm and fast that Zion going to what is perceived as a small market in New Orleans was terrible for him and the NBA. Unfortunately, the only relevance the Pelicans have seemingly had in recent years is Anthony Davis’ trade demand to leave the franchise.

Instead of resurrecting marquee franchises like the Los Angeles Lakers and New York Knicks, Zion will be heading to a franchise that is more known for losing superstar players with no real record of success. Since moving to New Orleans in 2002, the Hornets/Pelicans have made it to the conference finals just twice.

Conventional wisdom might dictate that this is a worst case scenario for the league – the NBA’s brightest new star in more than a decade toiling in anonymity for a few years before an ugly trade demand that will put a damper on his legacy and the league as a whole. One only has to look at how ugly the Anthony Davis trade saga has become to see what could potentially come down the road.

However, that may not be the case. In fact, an argument could be made that Zion coming to New Orleans could be the best thing possible for the NBA.

We’re conditioned to think that the biggest stars must gravitate towards the biggest markets, especially in the NBA. But LeBron James became a global phenomenon playing the majority of his career in Cleveland, Ohio. When LeBron was leading the Cavs to the Finals year after year there was never any talk about Cleveland’s market size, nightclub scene, or ranking as an elite cultural hub in the world. NBA fan and even casual sports fans cared about the Cavaliers because of LeBron James. Attendance and interest spiked in Cleveland and an entire franchise was brought into national relevancy. Yes, LeBron eventually moved on (twice in fact) but nobody could argue that the league somehow was worse off because of his time in Cleveland.

Zion Williamson is already such a significant household name that his career in New Orleans could play out in much the same way as LeBron in Cleveland.

Just how much interest is there in Zion? One metric might just be the college basketball ratings last year. With Zion on the floor, ESPN saw huge numbers for college basketball and Duke games in particular. This year’s Duke-UNC game (the one that Zion suffered his freak shoe explosion and injury) was ESPN’s highest rated regular season college basketball game in 11 years. And it was clear that it was the Zion Effect in action.

On the whole, ESPN’s college basketball ratings rose a remarkable 15% compared to last year with five of the top six most-watched games on ESPN being Duke games. Furthermore, ratings were up 30% compared to last year for just games involving Duke. And it’s not just television, too – Zion drives social and web traffic as well. You might be reading this article right now just because it’s a column about Zion Williamson!

With or without Anthony Davis, the Pelicans are now a must-see NBA team solely because of Zion Williamson. Think about how many nationally televised games the Pelicans will appear in during the first few months of the season. Think about how many times the Pelicans will lead SportsCenter or ESPN’s litany of debate shows. You’ll hear the Pelicans talked about as much as you will the Knicks or Lakers or any other team this offseason and into the start of the regular season. And even if Davis gets traded, New Orleans should return enough that it will make them an interesting team to watch and a team good enough to contend for a playoff spot in the Western Conference.

All the attention might be on the Lakers, Knicks, and Bulls and how those flagship franchises can rebuild, but it’s better and healthier for the NBA to spread out the balance of power throughout the country so that every fanbase can feel as though they have a pulse. It’s no coincidence that the league with the most parity, the NFL, is by far the most popular in the country. And while everyone assumes Zion won’t be in New Orleans for the long-term, maybe we shouldn’t jump to conclusions. Giannis Antetokoumnpo led the Milwaukee Bucks to the best record in the NBA and the conference finals and has shown no indication that he’s going to jump ship as quickly as possible. Perhaps there could be a new era where stars don’t automatically have to count down the days to build superteams in big markets.

Zion Williamson will be playing in the same city as Drew Brees, who surely hasn’t seen his star power diminished by not playing on either coast. The way Brees has embraced New Orleans since signing with the Saints in 2006 (especially in the aftermath of Hurricane Katrina and by winning the first Super Bowl in franchise history) has arguably only enhanced his national profile.

Who’s to say that Zion can’t or won’t embrace New Orleans in the same way? If he does, and if the Pelicans can win and contend, it may put a new NBA franchise on the map. And that may be the best result possible for the NBA.