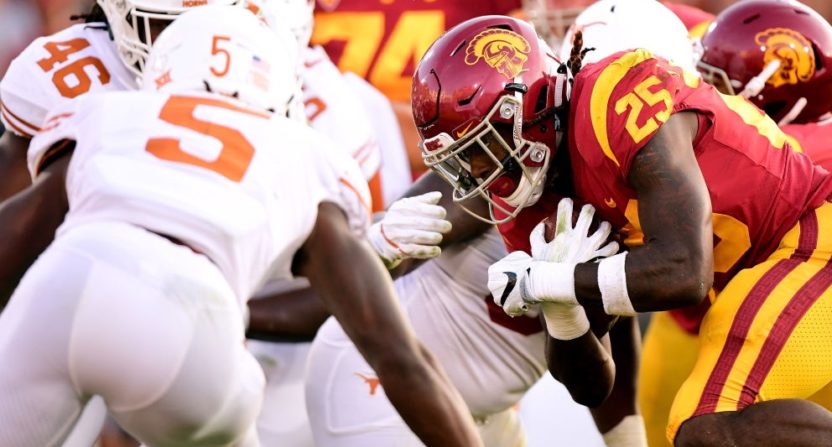 College football’s week three is in the metaphorical books. The weekend didn’t offer a broad slate of important games. But there were some noteworthy happenings.

Here are 10 key numbers from the past weekend’s action:

7: Texas-USC adhered to the “Law of Gus,” despite an inauspicious start. The Trojans edged the Longhorns, 27-24, in overtime. It was exciting, but not a well-played game on offense. The teams combined for six turnovers. Neither cracked 2.0 yards/carry on the ground. A key number for this game: 7. That’s the number of times USC and Texas traveled into the opposing 40-yard-line and came away with no points. USC earned the win. Texas did better than most anticipated. But it’s hard not to feel ambivalence about both these teams.

1/10: Michigan struggled more than anticipated against Cincinnati and Air Force. Contrary to the beliefs of Matt Millen and others, that had nothing to do with handling the triple option (3.4 yards/carry allowed, stopped 10/13 third down conversions). It was all about red zone offense. Michigan failed to score a touchdown on all four red zone trips against Air Force. The Wolverines have scored a touchdown only once in 10 trips the season, ranking 128th in red zone touchdown percentage. A young Michigan offense needs to improve that. The flip-side is, with that defense, there’s potential for Michigan to go a long way if they do.

.@UTCoachJones I am standing roughly 1 yard away from my wife. Should I reach out and hand her the remote? Or throw it three times? #GoVols

3: Tennessee lost to Florida, 26-20, conceding a touchdown after tying the game at 20-20 with just 0:50 remaining. It was a game Tennessee should have won. The Volunteers’ first six drives inside the Florida 35-yard line produced three points. The highlight of that stretch was a drive where Tennessee had 1st-and-goal on the Florida 1-yard line. Tennessee passed four times, instead of giving the ball to John Kelly who averaged 7.42 yards/carry during that game. Butch Jones became a trending topic, and not in a positive way.

12 Million: LSU hired Ed Orgeron on a permanent basis last offseason. LSU is now coming to terms with having hired Ed Orgeron (3-21 in the conference at Ole Miss during his last job) on a permanent basis. Mississippi State obliterated the Tigers, 37-7, in Starkville. They were outplayed and outcoached. (Maybe LSU should have looked at Dan Mullen?) Orgeron’s fate may become apparent this season. But with a $12 million buyout after 2017 and an $8.5 million one after 2018, the Tigers, who just bought out Les Miles, may have to stick this hire out.

3.7: Adam Schefter cited a source claiming that Wyoming QB Josh Allen would be the No. 1 pick in the 2018 NFL Draft. Those who are getting their first look at him have not been impressed. Allen, who lost much of his supporting cast, has averaged 3.7 yards/attempt and has a 0-3 TD-INT ratio against Power 5 teams after games against Iowa and Oregon. In his one game vs. a Power 5 opponent (Nebraska) last season, Allen averaged just 5.9 yards/attempt and threw five interceptions.

515: Notre Dame rolled over Boston College with 515 yards and seven touchdowns on 51 carries in a 49-20 win. Irish QB Brandon Wimbush amassed 207 rushing yards and four touchdowns on 21 carries. Josh Adams posted 229 yards on just 18 carries. The Irish, for unclear reasons, still tried to sprinkle in 27 pass attempts, averaging 3.6 yards/attempt. We could also have gone with 13, for the number of seconds remaining in the first half when BC, trailing 14-10, did not try to get into field goal range from the Notre Dame 44.

588: SDSU senior Rashaad Penny leads the nation in rushing, with 588 yards through his first three games, two of them against Pac-12 opponents. His 32-carry, 175-yard, one-touchdown effort helped the Aztecs control the clock, keep Stanford out of rhythm, and pull off the upset.

1227: Toledo came from behind to beat Tulsa, 54-51. The teams combined for 1,227 total yards. Toledo QB Logan Woodside completed 22/33 passes for 458 yards and six touchdowns. Three Toledo receivers had a catch of 60 yards or longer. Tulsa had three players with at least 130 rushing yards and one touchdown on the ground.

56: Penn State led Georgia State, 56-0. Georgia State, trying to come away with something, set up for a field goal with 11 seconds remaining. James Franklin iced the kicker, who then missed. Penn State is winning right now, so that move will testify to Franklin’s relentlessness as a coach. Or maybe his pragmatism. Gotta keep it clean for the committee against Georgia State.