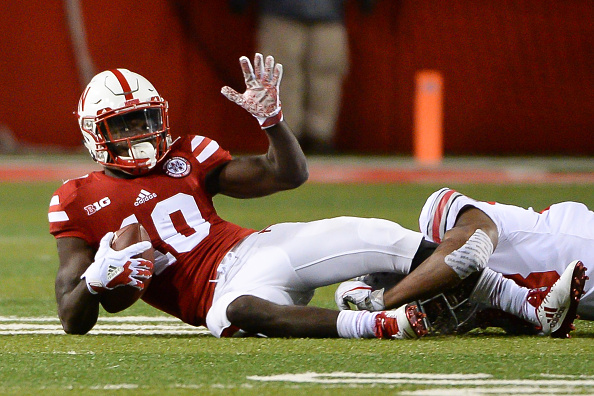 Week 7 in college football is finished, and some notable teams lost. Actually, four teams in the top 10 went down over the weekend. There’s going to be some upheaval in the rankings and we’ll see how that eventually affects the College Football Playoff race.

In the meantime, here are 12 key numbers from the weekend’s action.

8: Another week. Another new low for Nebraska. Ohio State eviscerated the Cornhuskers, 56-14, in Lincoln. The Buckeyes scored touchdowns on their first eight drives to start the game. The ninth, with backups, went 57 yards and stalled out in the red zone. Ohio State converted 12-of-16 third and fourth downs and never punted. This defeat made losing by 21 at home to Wisconsin seem reasonable. It’s hard to see Mike Riley returning.

2/12: Leave your guts on the tarmac. Syracuse upset Clemson, 27-24. Syracuse. Clemson didn’t commit any turnovers. The Tigers defense, except for a few big plays, held it together. The Orange just beat them on key downs. Clemson converted only two of their 12 third and fourth down conversions and allowed Syracuse to get 11 of 21. This defeat was rough for Clemson. But with the playoff committee, it’s better to lose the random road game than cost yourself a chance for a marquee win.

3.77: Trends did not favor Washington covering against Arizona State. The Sun Devils had covered 11 straight entering this game and won 10 of those outright. That trend does not explain Washington losing, 13-7, to ASU. We could lament the missed field goals. But the Huskies averaged just 3.77 yards/play against Arizona State’s defense. The Sun Devils had held one opponent (San Diego State – 5.77) below six yards/play this season. As with Clemson, it was better for Washington to lose here than cost themselves a quality win vs. Stanford or Wazzu.

7: Mike Leach teams have a wide result variance. When things go right, they go very right. When things go wrong, well, gird yourself. The Cougars started 6-0. They were ranked in the Top 10. They may still rebound and win the Pac-12 and go to the Playoff. The Friday night road trip to Cal was not their evening. Washington State committed seven turnovers in a 37-3 loss. The Bears scored 23 points either returning a turnover or on a drive beginning inside the WSU 30.

73: Fire Coach O? Offer him an extension? Auburn took a 20-0 lead over LSU in Tiger Stadium. They did not leave with that lead intact. LSU did not storm back in the second half. But their defense held Auburn off while they plodded along and capitalized on fortune. Gus Malzahn’s offense managed 73 yards and zero points on seven second-half drives. LSU’s D.J. Chark beat that output on one second-half play with a 75-yard touchdown on a punt return. Not coincidentally, LSU was the first halfway decent defense Auburn has faced since Clemson.

10: Tennessee won its bye week and got some hard-earned leadership reps. The Vols returned against South Carolina. They looked as listless as they did before the bye week in a 15-9 loss. Coming out of halftime with a commanding 9-3 lead, Tennessee punted on all four second-half possessions and let South Carolina score on three of their four. The Vols have gone 10 quarters, since the first half against UMass, without scoring a touchdown. With Bama next, that streak may extend.

16: Michigan had two missions after losing to Michigan State: establish the run and don’t turn the ball over. The Wolverines did both against Indiana. Karon Higdon ran for 200 yards and three touchdowns on 25 carries. Michigan committed zero turnovers. But the trouble with young teams is you fix a couple of problems, and another one or two pop up. Michigan committed a program record 16 penalties in the 27-20 overtime win, spotting the Hoosiers 141 yards.

1:33: Georgia Tech fell, 25-24, to Miami on a field goal with :04 remaining. It was the Yellow Jackets’ second blown lead in the fourth quarter this season. They blew a two-touchdown lead to Tennessee in the opener with John Kelly tying the game up with a touchdown with 1:29 remaining. If football lasted 58 minutes, Georgia Tech would be 5-0.

27: Bret Bielema teams are supposed to control the line of scrimmage. Alabama controlled both against Arkansas. The Tide ran for 308 yards and four touchdowns on 43 carries. The Razorbacks managed just 27 rushing yards on 29 carries. Thirteen of those yards came on one quarterback run.

18: Rutgers beat Illinois 35-24. That snapped the Scarlet Knights’ 18-game losing streak vs. Power 5 teams. It was Rutgers’ last P5 win since overcoming a 22-point deficit to beat Indiana 55-52 on Oct. 17, 2015. The Scarlet Knights were three days away from the indignity of going two full calendar years without winning against a P5 opponent.

230: Arizona QB Khalil Tate picked right up where he left off against UCLA. He rushed for 230 yards and two touchdowns in the Wildcats’ 47-30 win over UCLA. He now has 557 rushing yards over the past two games on only 29 carries. That limited sample has the redshirt freshman getting compared to Lamar Jackson and Mike Vick.