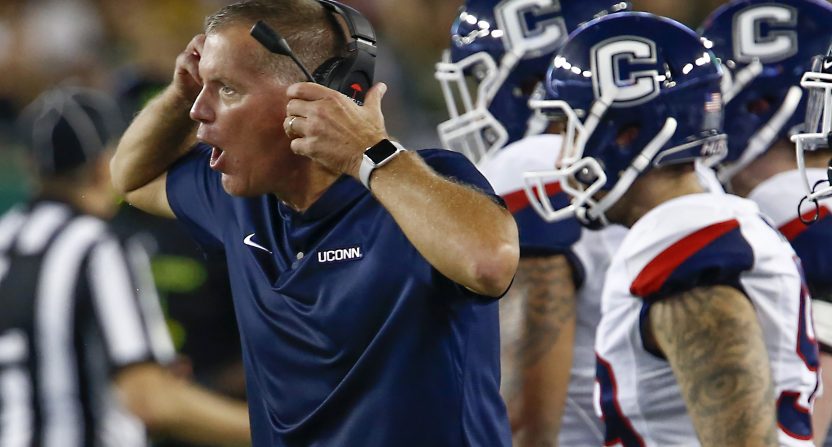 There are 130 Division I schools playing in the Football Bowl Subdivision. That’s at least 40 too many.

The University of Connecticut is reportedly returning to the Big East. It’s a move that should rejuvenate the Huskies’ basketball program. As for their football program, this might be the beginning of the end. The American Athletic Conference isn’t going to let UConn remain as a football-only member.

That leaves three options: The Huskies could operate as an independent, they could downgrade to the Football Championship Subdivision, or they could get out of the football business completely.

Big-time football isn’t for everybody. There are only a precious few that can consistently win at the highest level. Here are five other schools that should consider de-emphasizing or dropping football:

California football isn’t terrible, but it’s a money pit. Just a few years ago, it seemed like the entire athletic department was on the verge of financial ruin. Cal was staring at $440 million in debt due to stadium renovations. To ease the burden, UC Berkeley agreed to take on 54 percent of the debt from Cal Athletics. Still, it may take a quarter of a century to pay off this debt. It gets worse. Pac-12 revenues are lagging behind when compared to the Big Ten. Well, at least California will have will have a swanky new locker room thanks to a seven-figure gift from alum Aaron Rodgers. That should fix everything.

On the field, California hasn’t been relevant in a decade. The only thing you probably know about the program in that time is that it produced 2016 No. 1 overall pick Jared Goff. But in his three years at the school, the team went 14-23. The Jeff Tedford era (2002-2012) was exciting. He coached Aaron Rodgers, Marshawn Lynch, and DeSean Jackson. But the team hasn’t been much fun lately. The Golden Bears haven’t won more than eight games since 2008.

But as mediocre and fiscally unsound as California football is, we must thank the Bears for giving us the greatest college football ending of all-time.

ACC football historically has been a two-team race: Clemson and Florida State. Every now and then another team will claim the crown. A Virginia Tech here. A Georgia Tech or Maryland there. Miami hasn’t won the league since joining in 2004, but you must figure that will happen eventually. Yes, Wake Forest won the ACC in 2006. Kudos to Jim Grobe. He coached the Demon Deacons to its highest win totals (11-2 in 2006, 9-4 in 2007). His successor has done a decent job with Dave Clawson, winning three straight bowl games.

Wake Forest football isn’t going anywhere. Let’s redirect the funds to see if they can be a little more competitive in college basketball. It has only won the regular-season title twice over the past 24 years. The ACC might be the best basketball conference in the land. But even when the Demon Deacons had Tim Duncan, they only won it once in his four years.

Once upon a time, Paul Finebaum argued that Vanderbilt should be kicked out of the Southeastern Conference. Ok. Ok. Vanderbilt football hasn’t been lousy. Over the past 11 years, it has been to six bowl games. Former coach James Franklin probably took the program as far as it could go in his three-year stint: a pair of 9-4 seasons and back-to-back bowl victories. He parlayed that success into his current gig at Penn State. So far, the Derek Mason experience: 24-38, 0-2 in bowl games. Vanderbilt has always been sort of an odd fit in the SEC. While the league is known for its football first mentality (It Just Means More!), Vanderbilt is known for its top-notch academics. Plus, it has never been serious about winning games in a conference that lives and dies football.

Vanderbilt is good at other sports: baseball! The Commodores could be a sleeping giant in basketball. Nashville is by far the biggest city in the SEC, and there’s no NBA team to compete against. When it comes to luring recruits, Nashville has more entertainment options than say… Gainesville, Auburn, or Starkville.

The only reason for Vanderbilt to have a football team: that sweet SEC money.

Kansas basketball is one of the bluebloods. Three national championships. The second-most wins in the history of the sport (2,274). A great tradition. Kansas football is at the opposite end of the spectrum. It’s something Jayhawks fans tolerate until the start of hoops. Sure, there were the Mark Mangino years (2002-2009), including the miraculous 2007 season when it finished 12-1 and was ranked No. 7 in the final polls. He was the best thing to happen to that program until he was forced out after allegations of mistreating his players.

Over the past eight seasons, Kansas has had double-digit losses to five times. The Jayhawks haven’t had less than nine since 2009. In 2015, they endured one of the worst seasons ever for a major conference program by going 0-12 in David Beaty’s first year. Beaty’s went 6-42 before being canned last fall. His replacement? The Mad Hatter. Les Miles gives Kansas something it has never had before: a proven winner. But as good as Miles is, he’s not going to be able to overcome the shortcomings built over decades of incompetence. Kansas should just pull the plug.

Rutgers should be declared a federal disaster area. It was only invited to the Big Ten because of its proximity to the New York City media market. The Scarlet Knights administration thought the prestige of joining the league would boost its profile and be a financial windfall. Instead, Rutgers football is a national laughingstock, hopelessly stuck in an arms race it cannot win.

Rutgers likes to remind us that it’s the birthplace of college football, claiming that it hosted the sport’s first-ever game in 1869. That might be accurate, but it’s also irrelevant to the current landscape. Yep. There was the Greg Schiano era (2001-2011), highlighted by 2006 (11-2! Finished No. 12 in the nation.). But that was an aberration. Rutgers football has been largely terrible in the modern era.

Rutgers would be wise to concentrate on basketball. While that program hasn’t had much success either, it stands a better chance due to the talent in the Greater NYC area. Come back to the Big East Scarlet Knights.