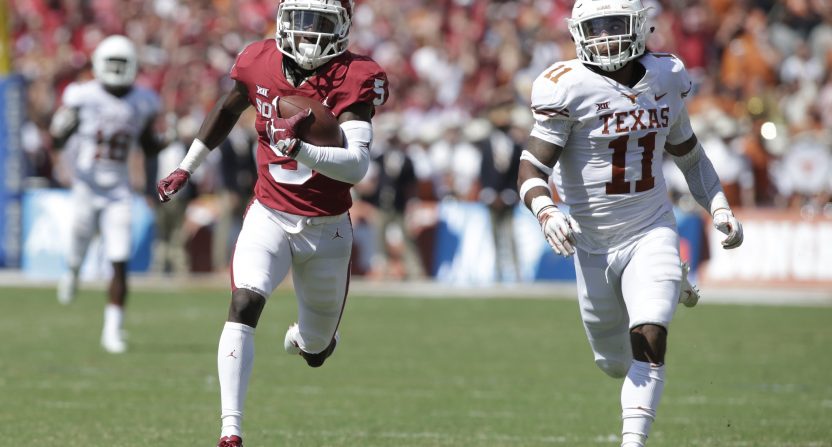 For the first time in Big 12 history, Oklahoma and Texas will take the field against each other to determine the Big 12 champion. As far as the Big 12 is concerned, this is the dream matchup for the conference with two of the bluest of blueblood programs and bitterest of rivals facing off for all the marbles in the conference. This is the matchup the Big 12 has wanted to see since bringing the conference championship game back in an age without division champions.

OK, so Alabama’s Tua Tagovailoa is going to win the Heisman Trophy this season. That has pretty much been a foregone conclusion, right? While that may not change this weekend, as some Heisman Trophy voters are already submitting their ballots, Oklahoma’s Kyler Murray has an opportunity to deliver his own Heisman-worthy moment and close the gap with Alabama’s quarterback.

Kyler Murray is having a better season than Baker Mayfield did last year, and that’s why this is the best two-man Heisman race since Reggie-Vince in 2005. The difference is we may never see Murray play football again after January. So enjoy it now. https://t.co/ePNORvyUN7 pic.twitter.com/5ltC6sdoYU

Murray has already been named the Big 12 Offensive Player of the Year with 3,674 passing yards and 37 touchdown passes to just seven interceptions with a completion percentage of 70.6, 853 rushing yards, and 11 rushing touchdowns. Murray’s stats are impressive and will be why he is in New York next week as a Heisman Trophy finalist. If Oklahoma beats Texas, then Murray is likely to be the biggest reason for it, and that should lead to a handful of big plays that could be defined as a Heisman moment (for those who believe you have to have one to be considered for the award). For what it is worth, Tagovalioa hasn’t had one of those desired Heisman moments because he and Alabama have been so dominant this season. But if voters are wooed by big plays in big moments, then Murray will get one final chance to serve some up against the Longhorns.

2. Oklahoma is 3-0 in rematches played in the Big 12 championship game

Texas is 1-2 in rematches played in the Big 12 championship game. Oklahoma is 3-0.

3. A chance for redemption for Texas

As weird as it may seem, considering Texas beat Oklahoma in the Red River Rivalry earlier this season, this is a good chance for Texas to find some redemption. The Longhorns let a 45-24 lead on Oklahoma evaporate in the fourth quarter with their offense going missing and the Sooners putting together quick scores to tie the game. Fortunately for Texas, they managed to get the win with a field goal in the final minute of the game. It was a major win for Texas, but showed the Longhorns still have to learn how to close out some games in certain conditions.

Texas later lost a back-and-forth game against West Virginia, and the Longhorns struggled to slam the door shut on Kansas last week. The way Oklahoma has been rolling on offense, suggesting Texas will have any lead that should be considered safe would be unwise. So if Texas does have a lead in the fourth quarter, they will have to step up on defense and offense to prevent Oklahoma from thinking they have a chance to win the rematch.

4. Tom Herman vs. Lincoln Riley is a coaching rivalry built for the Big 12

Oklahoma head coach Lincoln Riley and Texas head coach Tom Herman are young enough and ambitious enough to build quite a legendary coaching rivalry for years to come, and a matchup in the Big 12 championship game can go a long way to making an iconic coaching rivalry even better. Herman and Riley haven’t been the head coaches of their programs long enough to be compared to coaching rivalries like Bo Schembechler vs. Woody Hayes, but the seeds for something similar are certainly there.

They already coach at two legendary rival programs and have the potential to be battling for Big 12 bragging rights on a fairly regular basis. And two years into their respective head coaching tenures at their current schools, the two have split the results in the regular season with Lincoln scoring a win over Herman in 2017 and Herman getting his win this year.

It seems there are not enough good, quality coaching rivalries in the game. Jim Harbaugh vs. Urban Meyer is fine to discuss, but ultimately lopsided in favor of Meyer at the moment. Nick Saban vs. Jimbo Fisher could have some potential with Alabama and Texas A&M, but that may not have the staying power one might hope if Saban feels there is nothing more to accomplish in the next few years. But Herman vs. Riley is one rivalry that has true potential to last for a while.

Of course, Riley’s name floating around some various NFL coaching rumor mills could bring an abrupt end to this whole idea just as it is starting to get good.

The batch of rankings turned out by the College Football Playoff selection committee appear to give Oklahoma a pretty simple path into the playoff for a second straight season. A win by the Sooners coupled by an Alabama win over Georgia in the SEC Championship Game would very likely allow Oklahoma to move into the playoff as the No. 4 seed (assuming Clemson beats Pittsburgh and under the assumption 12-0 Notre Dame is in). The only competition for Oklahoma would be a potentially one-loss Ohio State with the Big Ten championship, but the committee has been firm in ranking Oklahoma ahead of Ohio State in recent weeks, even after Ohio State’s blowout win over Michigan last weekend.

If Oklahoma wins but is not selected for the playoff, however, then Oklahoma would then be playing in the Sugar Bowl instead and Texas will likely head to the Alamo Bowl instead.