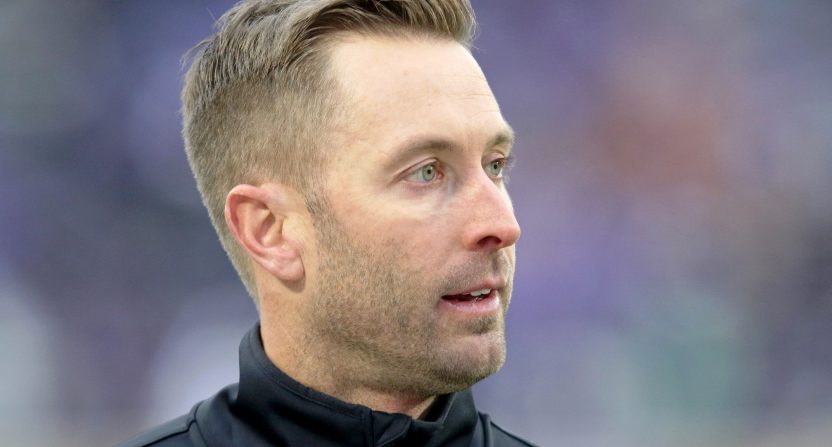 When a coach is in high demand, it can be a real Catch-22. If the coach is good enough, they will be wanted by other teams and if a team is lucky enough to have a great coach, there’s a good chance they could lose that coach to another team at any point. It’s up to the team and the coach to have an ongoing dialogue on exactly what both sides are looking to do to avoid something embarrassing happening. Otherwise, you may get a situation like this.

After the New York Jets and Arizona Cardinals enquired about recently hired USC offensive coordinator Kliff Kingsbury, AD Lynn Swann blocked the two teams from scheduling interviews with Kingsbury. According to Pro Football Talk’s Mike Florio, a “very low buyout” may entice Kingsbury to just buy himself out of his contract and resign from USC, opening himself up to any and all interviews.

It’s certainly a risk for Kingsbury but it’s probably a risk worth taking. Kingsbury is in high demand. His Texas Tech teams may not have been top teams in terms of overall record but they sure put points on the board. And with NFL teams adopting more and more of a spread offense, especially with the emergence of Patrick Mahomes and Baker Mayfield who played under him, Kingsbury has a great chance to at least be an offensive coordinator in the NFL, or even a head coach.

Swann may have felt he had reason to block those interviews. He hired Kingsbury less than a month ago to run the offense and didn’t expect his new coach to get up and leave right away as they’re starting up recruiting for next season. Ideally, you would want to have your new hire coach a few games before taking off for the next gig. At the same time, no one knows what the future holds and it’s the NFL. Whether he’s been there for a month or a few years, the situation is similar and coaches who have been there for a few years are usually given permission to interview.

And if this wasn’t asked in their interview, asking about NFL aspirations and the likelihood Kingsbury would go to the NFL should have come up in the interview if it was that important. Now, it looks like Swann is desperately trying to keep his OC, may still lose him and then that hurts his chances of getting someone just as good as the replacement because they may get blocked from interviews while at USC.

At this point, Kingsbury has all the power. Who knows if he actually leaves USC but one of these two scenarios is likely to happen. Kingsbury either goes to the NFL and likely becomes a head coach or offensive coordinator or he gets a huge raise (and a higher release clause) and stays at USC. Swann may have overplayed his hand here.

1 thought on “After being blocked from NFL HC interviews, USC’s Kliff Kingsbury may buyout his contract and resign”