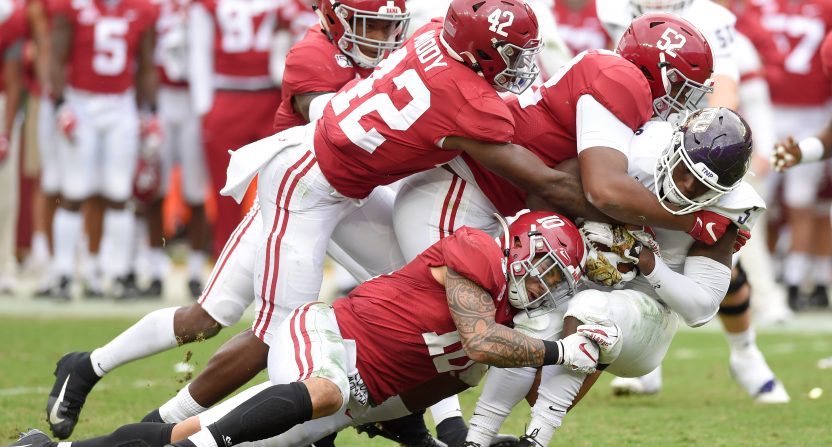 Heading into the final weekend of the college football regular season, nine teams can realistically say they have a shot at qualifying for the College Football Playoff. Three of them are almost guaranteed at this point. The final spot will be up for grabs over the final two weeks.

Arizona State, for all intents and purposes, eliminated No. 6 Oregon on Saturday. No. 8 Penn State fell out of the race after picking up their second loss, away at Ohio State. That leaves a final group of nine, all of which have only one loss and will be playing in a conference championship (except for Alabama).

Gauging the various hypotheticals and scenarios that the playoff committee could potentially deal with is fascinating. We’ll run through plenty of those today, in the lead-up to the committee’s Tuesday rankings reveal.

First, the nine teams that are still in contention (in order of their AP Poll ranking): LSU, Ohio State, Clemson, Georgia, Alabama, Utah, Oklahoma, Minnesota, and Baylor. Eight of those teams could play in conference championships in two weeks. With Georgia ranked fourth and slated to play LSU in the SEC Championship, we already know that there will be a shakeup in the top four to some extent. A Georgia win in that game would screw things up for everybody.

Oklahoma and Baylor are on a collision course in the Big 12 Championship. The loser of that game is out for sure, and the winner will rely on other results and the committee’s perception of them to qualify. Oregon could spoil everything for the Pac-12 by beating Utah in their title game. Ohio State could eliminate Minnesota in the Big Ten Championship, if Minnesota is able to get past Wisconsin this week.

Alabama remains somewhat of a wildcard. It’s hard to see them getting in, given their lack of a conference championship, relatively soft schedule, and loss of QB Tua Tagovailoa; but a convincing win against Auburn would improve their perception, and we all know that the Crimson Tide carry significant weight.

Let’s take a look at some hypotheticals:

The SEC Championship might be the most important game over the next two weeks. LSU, ranked first in the AP Poll again, is expected to win. Georgia’s passing offense has been unimpressive, and will have a tough time keeping up with Joe Burrow.

Let’s say LSU beats Texas A&M and then Georgia in the SEC Championship, dropping the Dawgs from the top four. That probably secures the Tigers the top seed, unless Ohio State plays convincingly enough over the next two weeks to usurp them. Clemson, who play South Carolina this week in a rivalry game and then either Virginia or Virginia Tech in the ACC Championship, will most likely handle their business and take the third seed.

No changes in the top three would create some interesting decisions. The committee may have to decide between a one-loss Oklahoma or Baylor, a one-loss Alabama, and a one-loss Utah. If Baylor beat Oklahoma in the Big 12 Championship rematch, that decision is probably a bit easier: the committee doesn’t seem to respect Baylor at all, and it’s hard to see them letting the Bears in almost any scenario.

Baylor have been far from impressive for most of the season. They needed three overtimes to slip past 5-6 TCU, and they took two OTs to beat 4-7 Texas Tech. Rebuilding West Virginia, who sit second to last in the Big 12, lost 17-14 in Waco on Halloween. 2-9 Rice mounted a second half comeback and only lost by eight against Baylor in September. And, of course, the Bears blew a 28-3 lead against the Sooners just 10 days ago. Compared to a dominant Utah, and Alabama, Baylor would have a hard time convincing the committee, even with a revenge win against Oklahoma and a 12-1 record.

Utah has consistently dominated opponents, and were probably better than Oregon even before the Ducks fell against Arizona State. On Saturday, the Utes walked right through Arizona, 35-7, and have won by three possessions in all but two games this season. They decimated a revitalized Oregon State (5-6) 52-7, and their one loss, to USC, looks considerably better now that the Trojans are 8-4 and ranked 25th in the AP.

The committee would have to prioritize Utah over Alabama, if the decision comes to that. The Crimson Tide are playing Mac Jones at quarterback, and the committee is tasked with taking into account injuries and absences that could affect a team’s play. Jones and Alabama would have to impress in a similar way to how Cardale Jones impressed for Ohio State a few years ago but Cardale had the benefit of a conference championship game.

The Tide’s schedule hasn’t been extremely difficult; ESPN ranks their strength of schedule as similar to Utah’s. A win against Auburn in the Iron Bowl, even a convincing one, shouldn’t be enough to overtake a conference champion. Disaster scenario No. 2 (we’ll get to No. 1) for SEC haters is Utah losing to Oregon and Baylor beating Oklahoma, which could shepherd Alabama into that fourth spot almost by default. Even then, the committee could reasonably reward a Big 12 conference champion.

Oklahoma is an interesting matter. They looked dominant for much of the early season, with Jalen Hurts looking like a Heisman favorite and the Big 12 looking like a foregone conclusion. But after Kansas State jumped out to a big lead and held on (by inches) to pull off a huge upset, the Sooners haven’t looked nearly as convincing. They needed a last-second two-point conversion stop against Iowa State to win by a single point, they fell behind and had to climb all the way back against Baylor, and they controversially slipped past TCU on Saturday, 28-24. Their rivalry game this weekend, against No. 21 Oklahoma State, will be extremely difficult as Stillwater is a tough place to play.

If Oklahoma survive their final two games, they will have built a nice case for themselves, despite their late-season slip. Winning on the road at OK State and beating Baylor twice is impressive. A hypothetical decision between Oklahoma and Utah is one of the more interesting potential conundrums. Some of it could come down to how much the committee values a Utah win over Oregon. The Ducks have to beat Oregon State this week without much trouble in order for a Utes title game win to look better in the committee’s eyes.

Oklahoma has a more impressive recent history, plus a Heisman trophy candidate at quarterback who has proven he can play and win big games. But Utah’s defense is one of the best in the country and Oklahoma’s is not. It would be an extremely tough decision, and one with massive implications for conferences that desperately want to see one of their schools get into the playoff. Right now, Utah is ranked ahead of Oklahoma. We’ll see how that changes in the coming weeks.

Alabama losing the Iron Bowl would create a much clearer path for Oklahoma, Utah, or Baylor, as long as they win the games they have to win. I don’t see an argument for a two-loss Georgia inserting itself into the conversation, even if they keep the SEC Championship close. The South Carolina loss is too damaging to their case.

It’s difficult to see either Ohio State or Clemson falling in the next couple of weeks. But crazier things have happened in college football.

OSU plays Michigan this week, and while the Buckeyes have blown out the Wolverines in recent years, it is still a rivalry game, and Michigan is ranked 10th at 9-2. The game is at the Big House and even though recent precedent suggests a cakewalk for OSU, it could still be a significant challenge.

In the Big Ten Championship, OSU will face either Minnesota or Wisconsin. The Buckeyes blew out the Badgers earlier this year, but perhaps Wisconsin carries momentum from a huge win over the Gophers. Maybe Minnesota impresses and pulls an upset. In the latter scenario, the one-loss Gophers would probably make the top four.

A one-loss Ohio State, especially if that loss comes against Michigan and they still manage a conference championship, would probably have a better case than some other one-loss teams. It would be reasonable to put the Buckeyes in over Alabama, and it would certainly be a close debate if Oklahoma and/or Utah convincingly win their titles. OSU could slip in as the third-seed alongside one of Oklahoma or Utah if an upset occurs, with LSU and Clemson still comfortably at the top. A loss to Minnesota or Wisconsin could hurt OSU more if other schools maintain their cases, particularly given that Minnesota would likely be in with a conference title.

Clemson is a dicier one. It’s even harder to foresee the Tigers falling to 4-7 South Carolina or one of the Virginia teams in the ACC Championship, given how much Clemson have dominated in recent weeks. But the Gamecocks managed to pull off a sudden upset of Georgia earlier this year, and it’s hard not to remember Clemson barely escaping North Carolina back in September.

While the committee will value Clemson’s general dominance this year, they won’t have many quality wins to take into account. Not a single team that Clemson has faced this year is currently ranked in the top 25. It’s not their fault that the ACC is a bit of a disaster, but it doesn’t help their case. A conference champion in another conference, particularly Utah, might have a compelling case. The committee is supposed to value conference championships. Often for good reason, that hasn’t always held true.

The worst possible outcome for the teams on the bubble is a close Georgia win over LSU in the SEC Championship. The Dawgs, who would then have a conference championship and a win over the No. 1 team in the country, in addition to their existing quality victories over Auburn, Florida, and Notre Dame, would be almost impossible to keep out. LSU would have one loss and wins over Alabama, Auburn, and Florida, plus the case that they were ranked No. 1 for much of the season. They would probably stay in the top four as well.

Barring other upsets involving OSU and Clemson, or if Texas A&M or Georgia Tech produce big upsets this weekend, the SEC Doomsday Scenario is absolutely in play. If that is avoided, the committee will face some fascinating decisions with another handful of teams.