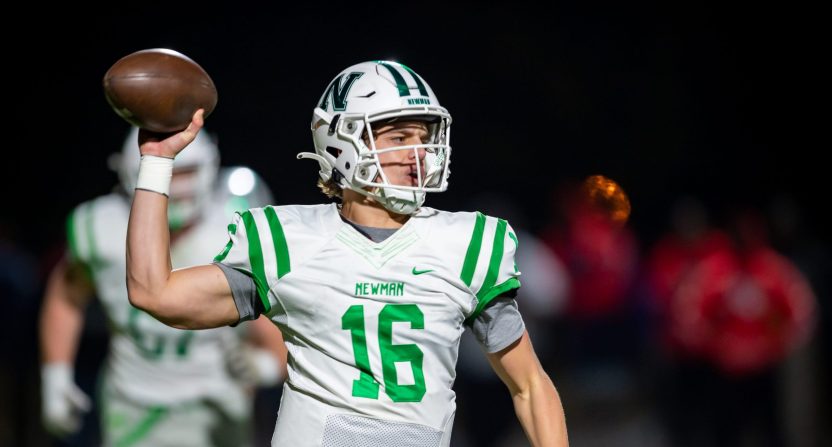 Top 2023 college football recruit Arch Manning has arguably the most hype surrounding him of any high school football player in recent memory.

Much of that is due to his family lineage, but he clearly has the skills to back it up, given he’s considered the No. 1 recruit in the 2023 recruiting class by many.

Almost every program was going after Manning at one point, but two schools that seemingly had the best chance of landing him were the Georgia Bulldogs and the Texas Longhorns. There has been much speculation on which team Manning would choose, but he ultimately made his decision on Thursday and it is far from a shocking choice.

He announced on his social media that he would be attending the University of Texas to play for head coach Steve Sarkisian in 2023.

Committed to the University of Texas. #HookEm pic.twitter.com/jHYbjBaF5K

“Committed to the University of Texas,” Manning wrote on his social media post.

Texas has been known for its excellent football program over the years but has not seen as much recent success as many fans would have hoped. The program has not made the College Football Playoff since its inception and last made it to a National Championship Game in 2009.

Many Longhorn fans are extremely excited about the news that Manning will be playing for their program, and they hope that he can be the guy to bring them back to prominence.

I love this. Someone finally sees the vision. Be the one that brings us back and you will live eternally in our Longhorn Royalty Club. Earl C, Ricky, VY, Colt, ? https://t.co/knhOBIN29d

Welcome to the Fam Arch 🤘🏿 https://t.co/Ts9zgz7IsC

Yeah! Damn this is big for Texas #hookem https://t.co/hSGUXp4WYZ

What a MASSIVE day for the @TexasLonghorns! Welcome to #LonghornNation, Arch!!! You made the right choice. Lol! You're gonna have one HELLUVA ride. Awesome times to be had in Austin, at @UTAustin and with @TexasFootball!! Congrats @CoachSark!! Let's freaking gooooooo!!! #HookEm🤘 https://t.co/1afB4So8gl

Texas sitting down at the table to recruit Arch https://t.co/yPGnFcch7U pic.twitter.com/bGevB5V3ip

Manning’s high school teammate Will Randle also committed to Texas earlier this week, so that certainly could have played a factor in Manning’s decision to become a Longhorn.

His decision to go to Texas will certainly put a ton of pressure on his shoulders moving forward, with many hoping that he can elevate the program. He has certainly been impressive throughout his high school career, throwing for over 5,000 passing yards and over 70 touchdowns in his three years so far with Isidore Newman.

That being said, anything other than a national championship at Texas may be seen as a disappointment by fans, so expect the hype to be pretty high during Manning’s collegiate career.