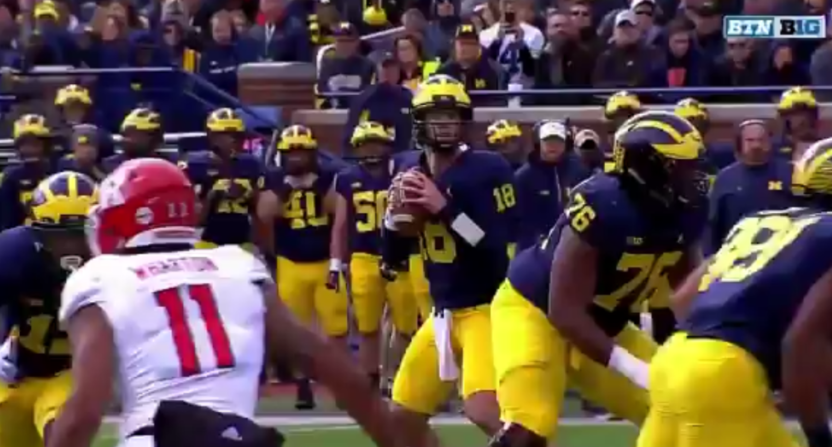 Halfway through the second quarter at home against Rutgers, Michigan’s offense was doing nothing. Wolverines’ senior quarterback John O’Korn had only completed three of six passing attempts for 13 yards and an interception, and the Big House was not a happy place to be.

Redshirt freshman Brandon Peters, who was one of the highest rated recruits in the country for 2016, entered the game. Suddenly there was a long-awaited spark on offense. Karan Higdon and Ty Isaac both started to run the ball with impunity, and the long-dormant Michigan passing game woke up. After two rough losses to Michigan State and Penn State with O’Korn under center, and struggles otherwise at Purdue and Indiana, it seemed well past time for a quarterback change in Ann Arbor. Did Jim Harbaugh wait too long to make the change?

In spite of rustlings that Peters could beat out both Wilton Speight and O’Korn in fall camp, Speight won out, O’Korn was still pegged as next man up and Peters would have to wait even longer for his opportunity. But without Speight, Michigan didn’t look much like Michigan on offense, and put undue stress on a talented but straining defense.

And there were certainly rumblings from Michigan fans for a change at QB, which Harbaugh had to address leading up to the game against the Scarlet Knights.

Peters led Michigan to touchdowns on three straight drives to begin his career, helped them to a 35-14 victory, and saved Jim Harbaugh and the Wolverines from what would have been an utter catastrophe against Rutgers. He also added some new life to a season that was heading off the rails. So why didn’t Harbaugh pull the trigger until now?

Michigan was able to win in spite of offensive foibles at Purdue and Indiana, but with another QB could have easily beaten Michigan State three weeks ago instead of falling 14-10. What would the Wolverines’ season look like at 7-1 instead of 6-2 with a home game against Ohio State still left on the schedule? After the blowout in Happy Valley, Michigan looked way more sluggish than anyone would have expected against Rutgers at home, so a QB change would be an easy tonic to heal what ailed a reeling offense. And for any QB, let alone a redshirt freshman, scoring three touchdowns on his first three drives is something to smile about.

However, this is still Michigan at home against Rutgers, which is to say, the sample size is really small. With how bad O’Korn was playing, anything would have been a dramatic improvement, and Peters certainly took advantage of a prime situation.

It will take more games and more reps against better teams to see whether the highly-rated Peters has what it takes to consistently ignite a stagnant Wolverine offense. But with games against Minnesota and Maryland to come, and with Wilton Speight’s estimated return to full health a few weeks away, he will get a chance to make the job his own going forward. It’s a sea change for Michigan, but one that had to happen after the season almost totally fell off the rails.

In-season QB changes can change seasons, as Sam Darnold and USC proved last year. Jim Harbaugh and Michigan have jumped into this pool, and it has changed the present and the future for one of the biggest programs in college football.