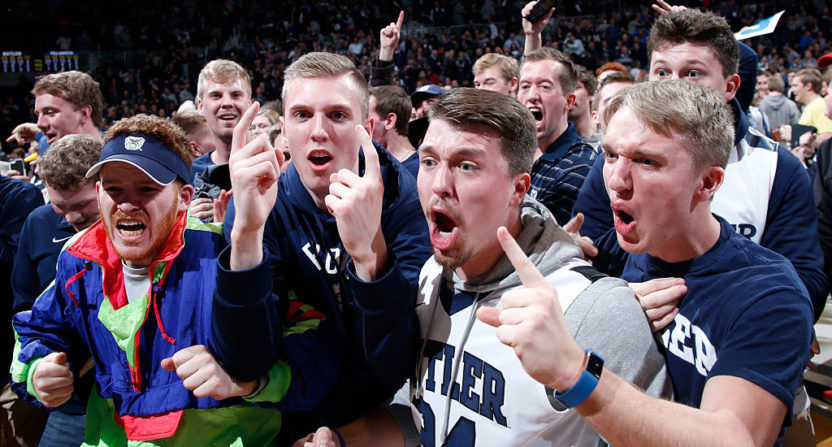 There have been plenty of NCAA schools bringing in or expanding beer sales recently, and Butler is the latest. As per David Woods of The Indianapolis Star, the Bulldogs have already been serving alcohol in special donor hospitality areas, and now they’ll be expanding that to all of Hinkle Fieldhouse for basketball games. And that could later be expanded to other sports:

You can now buy a beer at Butler basketball games in Hinkle Fieldhouse.

The university announced Wednesday that alcohol will be sold at concession stands and select temporary locations beginning with Saturday’s game against Saint Louis. Beer sales will begin when doors open – 90 minutes before tipoff – and end at the under-12-minute media timeout of the second half.

…Those buying alcohol will have their ID checked by a vendor. There will be a limit of two beers per transaction.

Alcohol was already being served in the Wildman Room and Efroymson Family Gym. Alcohol is not allowed to leave those respective hospitality areas for donors and guests.

Butler students age 21 and older must have ID checked at the student entrance and receive a wristband. Those wearing wristbands are allowed to have one beer at any given time.

Similar procedures will be followed for other Butler sports events, according to the announcement.

This came after the university applied for an alcohol permit in September. At that time, athletic director Barry Collier said they’d received support for the plan from residents who live nearby.

“Butler has communicated this plan to those who live near campus and the permit application has been supported by the Butler Tarkington Neighborhood Association. Butler is committed to maintaining the exciting and positive gameday experience that our fans and their families enjoy for all contests that take place on our campus.”

Beer sales at university games have expanded dramatically across the U.S. in the last couple of years, and it generally seems to have worked out pretty well. There’s an extra revenue opportunity there for schools, and as long as the servers are careful not to sell to anyone already too inebriated, it doesn’t seem to have too many negative impacts on the fan experience or on the on-court action. And it seems likely Butler will be far from the last to do this.