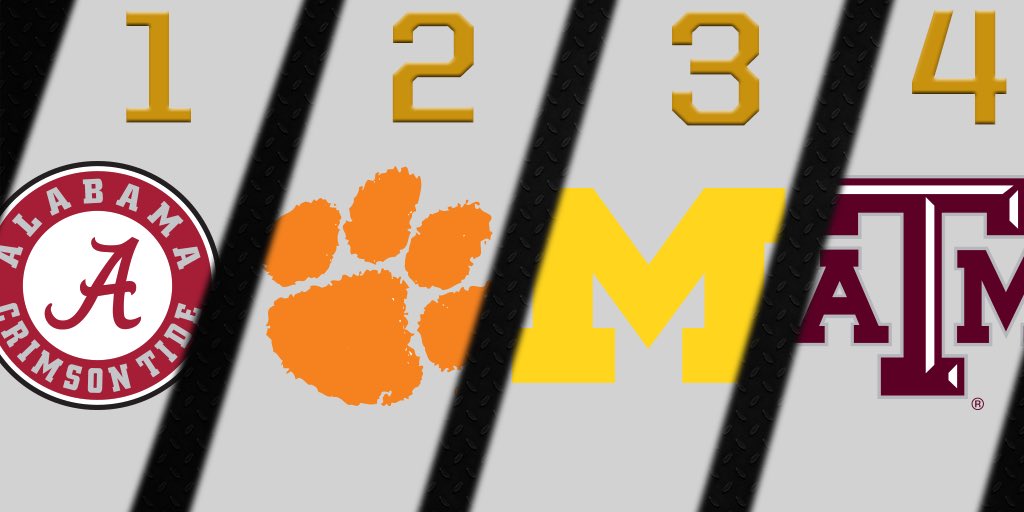 It’s the start of a new season of College Football Playoff selection committee rankings, which means that we have six weeks to try and understand what this committee is thinking before the final rankings come out on December 4th.

Remember, a full 25% of this year’s committee (Jeff Bower, Rob Mullens, and Herb Deromedi) have not been on the committee before. We never knew how close any committee votes were or what factors were deal-breakers in years past. We have no idea what opinions left the room this past summer and what these three new committee members are bringing in. So while precedents from previous years can be a little useful, we have to make sure not to read too much into them, because it’s a brand new committee every year.

There are a lot of things to talk about, but before I talk about the rankings in particular, I want to start with a statement about the rankings and strength of schedule in general. It has been abundantly clear for the past two years that the selection committee loves to fall back on SOS, except for cases where the committee needs to make exceptions. It has also been abundantly clear that the committee has no good or consistent way of measuring SOS. Strength of schedule is eyeballed, which is a terrible thing.

Last season, we only ever heard the committee mention one SOS metric–or “non-metric,” as I’ve taken to calling it. Jeff Long mentioned “wins over teams with .500 records or better” a lot last season, as if that was a useful and meaningful way to judge SOS. We heard it again from Kirby Hocutt this season, now. That SOS “metric” was one of the reasons given by Hocutt for Texas A&M being ranked over Washington, since Texas A&M has four such wins while Washington has only two. I could go into a whole rant about why this “metric” is dumb, but I’ll suffice with this: by this metric, No. 8 Wisconsin gets more credit for beating Akron than No. 9 Texas A&M gets for beating Ole Miss. That’s just not right.

In the post-ESPN show conference call, Kirby Hocutt also mentions that the committee “doesn’t look at margin of victory”. I don’t know what that means, but these are supposed to be rankings of actual resumes, not just computer rankings of wins and losses. MOV in and of itself might not be relevant, but how well a team wins should matter. A win by 40 might not say much more than a win by 21, but a win by 21 certainly says more than a win by just three points.

What the CFP Selection Committee Taught Us: Week 9

Some of the bigger surprises in the rankings can actually be found towards the bottom, but I’ll be going in order so as to avoid confusion. First of all, we have to discuss the “shocker” at No. 4. It’s not much of a shock, though, as the committee does something similar every year. The past two years, the committee has used Baylor to make a point that a bad nonconference–and overall–strength of schedule will hurt you. Washington will be fine eventually if it continues winning, but the committee wanted to send the message that a 1-loss team with a good SOS will be ranked higher than an undefeated team with a bad SOS.

The committee put Louisville at No. 7, which basically just means that they agreed with my points about Louisville’s lack of quality wins in this week’s CFP Implications. Wisconsin at No. 8 should be the much bigger story, though. It didn’t surprise people because that’s what we’ve seen in the polls for the past few weeks, but it really is noteworthy. In 2014, the highest-ranked 2-loss team in the initial committee rankings was No. 18 Oklahoma. Last season, it was No. 17 Michigan.

Now, it is true that there are far fewer undefeated and 1-loss teams than there were at this point the past two seasons. But last season, every single undefeated or 1-loss Power 5 team was ahead of all 2-loss teams; in 2014, only 1-loss Duke (with no good wins and an atrocious SOS) was behind the best 2-loss teams. This season, Wisconsin (along with Auburn) is ahead of four 1-loss P5 teams. That is both a testament to the quality wins and tough SOS that these two teams have, along with a statement about the lack of a quality resume from the teams behind them. We will eventually see a 2-loss team in the Playoff. Wisconsin and Auburn are both in position that if they win out, they will make it into the Playoff.

Further down the rankings, there are some interesting developments. Developments lower in the rankings always have to be taken with a bit of a grain of salt, though, as the committee has shown in the past that it is less precise the lower down you get than it is with the teams at the top. Everyone thinks that Penn State at No. 12 is such a shock, but it really shouldn’t be. To start with, Penn State doesn’t have a bad loss. Pitt might not be ranked, but the Panthers were certainly at least mentioned by the committee and are probably near the fringe of that Top 25. Penn State also has the best win (second-best, according to the committee) of any team in the country, along with solid wins over Minnesota and Temple. I still have them eliminated from Playoff contention in CFP Implications because there are no further opportunities on the schedule for ranked wins (even including the Big Ten Championship Game, that would give Penn State two ranked wins on the season), but being up at No. 12 right now makes sense.

The Big 12 is where we see some curious rankings, though. Oklahoma as the highest-rated team is a statement of support based on that amazing nonconference schedule, but the Sooners haven’t beaten anyone yet. They have three +.500 wins (which the committee cares about, as mentioned above), but the only team with an actual winning record that the Sooners have beaten is 5-3 Kansas State. Baylor being ranked above West Virginia is very curious, though. The Bears do have that win over Oklahoma State, but they also have a much worse loss.

What this also tells me is that the committee is not giving West Virginia so much credit for a nonconference win over BYU. We’ll have to see if that changes as the season goes on and BYU gets into the easy section of its schedule. Oklahoma State has the best collection of wins of any Big 12 teams, and the Cowboys are stuck in between Baylor and West Virginia. It’s hard to tell how much the committee is holding that Central Michigan loss against them, but they would probably be the top Big 12 team if nor for that loss, so the committee isn’t ignoring it.

The final curiosity is Western Michigan down at No. 23 and Boise State at No. 24. This makes me wonder just how high Boise State could have been if not for that Wyoming loss this week–and more importantly, which wins of Boise State earned it this ranking. It seems by West Virginia that wins over BYU aren’t worth so much. Is Boise riding solely on the win over Washington State? Western Michigan clearly isn’t getting too much credit for beating Northwestern and Illinois, even though they are both P5 teams. These two will be ones to keep an eye on as the season goes on, as they are currently the only ranked Group of 5 teams, though there is a whole host of 2-loss AAC teams probably waiting in the wings as other teams slip up.