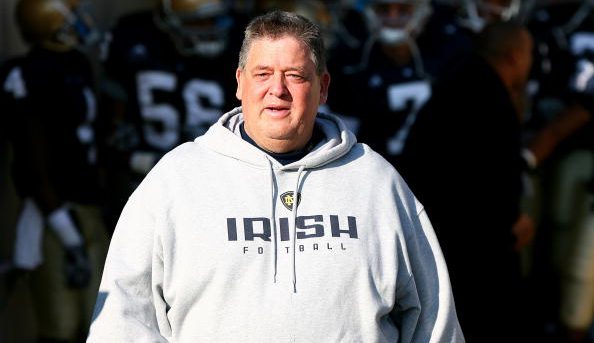 Former Notre Dame and Kansas coach Charlie Weis was paid a combined $4.6 million to not to coach those schools last year, but he hasn’t given up on the world of football, and he still has plenty of stories to tell.

A fascinating new long ESPN feature by Tommy Tomlinson dives into Weis’ world, and gets remarkable quotes on how upset he is over how Notre Dame (his alma mater) treated him (amongst other things, they allegedly, following his firing, tried to demand a donation from him in order to fulfill their earlier promise of admitting his son), on his daughter with global developmental delay and the Hannah and Friends property they’ve built for special-needs residents, on his desire to get back into football and the close calls he’s had at the NFL level, and on the gastric bypass surgery that almost cost him his life. The whole thing is worth a read, but three sections particularly stand out.

1. Angered by AD Jack Swarbrick’s treatment of him, Weis toasted his final check from Notre Dame with a Coors Light.

Weis says he asked Swarbrick for a favor when he was fired. He didn’t think Notre Dame’s previous two coaches, Bob Davie and Tyrone Willingham, had been treated well after they left. He recalls the conversation: “This is my alma mater. I put my blood, sweat and tears into fixing this place. I go, I really don’t want to be treated like s—. He goes, You will always be family.”

“The guy’s never said another word to me.”

It’s the kind of thing that happens a thousand times a day: A boss fires an employee, and they don’t speak again. It has happened to Weis more than once. But this one sticks with him.

Kansas is still paying him through the end of this year, $208,333 a month, but that’s not a big event in the Weis house. The money from South Bend was a big event. It always arrived right before Christmas. Charlie and Maura always held a little ceremony. Last year, when the final payment of $2.1 million came in, they did it one last time. Maura got a glass of wine. Charlie got a Coors Light. And they raised a toast to old Notre Dame.

2. Weis texts Bon Jovi lyrics back and forth with Bon Jovi:

He’s also still friends with Jon Bon Jovi. They’ve known each other since Weis worked for the Giants in the early ’90s. A little more than a month ago, when Charlie Jr. got married, Bon Jovi attended the wedding. The cover band that played at the reception kicked into “Livin’ on a Prayer” and started coaxing Bon Jovi up to sing. A video of the moment went viral for a day or two, mainly for the expression on his face: Am I seriously gonna have to do this? But he stood up and sang anyway, sort of a karaoke selfie. Weis says they talked about it later. Everything’s cool.

Weis says Bon Jovi sent him a text years ago when he was struggling at Notre Dame. He sends the same text back to Bon Jovi from time to time:

You better stand tall when they’re calling you out.

3. Weis met his wife trying to defuse a fight after his friend stole her chicken sandwich.

One night in 1991, at a beachside bar called Leggett’s, Weis, who was working with the Giants then, was hanging out with his buddy Mike Murphy, the Giants’ chief of security. Murphy, fueled by hops and barley, wandered over to a table of strangers. He reached down, opened a to-go box that belonged to a blonde, and devoured the half-eaten chicken sandwich she was saving for her dog. There was a ruckus at the table. Weis came over to make peace. He introduced himself to everyone, especially the blonde. It was Maura. They got married 15 months later.

Any one of those stories would make an incredible centerpiece for a profile in its own right. All three, and the rest of the amazing details in here? They make a remarkable story, and one that’s definitely worth the read.