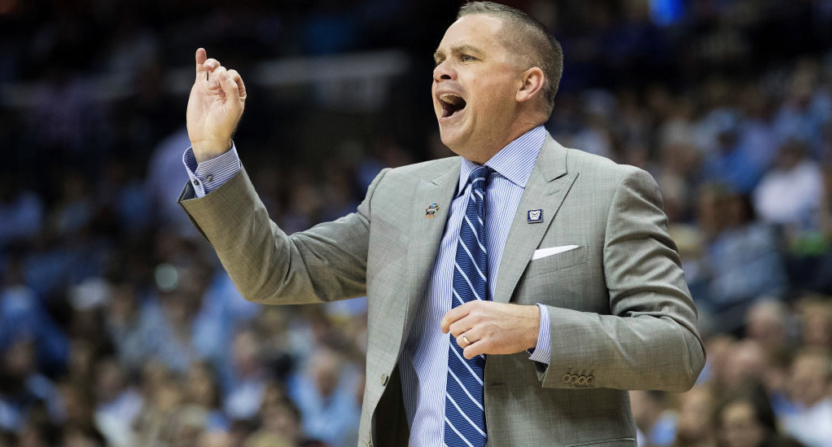 The Ohio State basketball coaching search seems to have finally landed on a candidate. After the surprisingly timed departure of Thad Matta, OSU athletic director Gene Smith had to scramble together a coaching search in fairly short order.

However, things didn’t quite look promising for Ohio State with an unrealistic wish list and several top candidates turning them down.

Brad Stevens?!? You think he’s going to actually consider leaving the team with the best long-term situation in the NBA outside Golden State to coach an NCAA team who hasn’t been to the tournament two years in a row?

My timing for this house sale, well ?. But we are moving to NKY. Love Xavier! Now, about that house we have to sell… any takers?

Fred Hoiberg: "Anytime your name is associated with great job, it's an honor. But I'm head coach of the Bulls/have no intention of leaving."

I'm blessed and honored to be the coach at Creighton…..and am looking forward to many more great years in Omaha! #rolljays

With Smith running out of options very quickly, the Buckeyes may have found the best available coach willing to take the job: Butler’s Chris Holtmann.

Via the Columbus Dispatch, the Butler coach will be named as OSU’s new program leader today:

Ohio State will hold a press conference today at the Fawcett Center to announce Chris Holtmann as its new Ohio State men’s basketball coach, multiple sources close to the situation have confirmed to the Dispatch.

Holtmann has been the head coach at Butler for the past three seasons, where he has won at least one NCAA Tournament game every year. He will replace Thad Matta, the winningest coach in program historywho was fired Monday after 13 years.

Holtmann emerged as the front-runner Thursday afternoon in a search that athletic director Gene Smith had promised at least two members of the team that would be completed by the weekend. The two sides were known to be close late last night, but a deal had not yet been reached. Smith’s private plane is scheduled to fly to Indianapolis at 10:10 this morning.

Holtmann is an intriguing hire and was at least one of the names first brought about when the OSU job opened. Like Matta, he a coach of the Bulldogs before being hired by the Buckeyes, so there is something in common with his predecessor.

A lot of Ohio State fans might be breathing a sigh of relief today. When McDermott was the rumored frontrunner, there was a sense of desperation and exasperation in Buckeye Nation, considering the fact he never made a Sweet 16 and had four straight losing seasons in the Power Five at Iowa State. With Holtmann, there’s at least a sense of optimism that he’s a coach on the rise and the fact that Butler coaches have done quite well for themselves in recent history (Matta, Stevens, etc.)

Holtmann has spent just three years at Butler. But on the plus side, he’s won at least one tournament game in all of those seasons. Last season, he led Butler to the Sweet 16. And another positive is that at 45 years of age, Holtmann could have a decade or more at Ohio State to be a long-term replacement for Matta.

But let’s not kid ourselves that Holtmann is an automatic, surefire home run who will undoubtedly lead the Buckeyes to the Final Four.

At Gardner-Webb, Holtmann had a 44-54 record before going 70-31 at Butler. While Holtmann has navigated Butler’s tenure in the Big East, there should be questions about what he’ll do at a program the size of Ohio State. Will Holtmann look to build with four-year players or will he try to make a splash in recruiting and bring in game-changers who might vault OSU back up in the national conversation, but see them leave campus early?

There are questions around Holtmann and how he’ll do at Ohio State but the reality is this is the best the Buckeyes could hope for by making a hire on June 9. Had the program made this decision back in March or April, then perhaps Archie Miller could have been an option. Or maybe they could have had more time to try to coax Donovan or Hoiberg away from the pros.

It was clear from the beginning that Gene Smith was going to rush to put this hire together and not leave the program in limbo for too long. And an interim hire for the season wasn’t really a great option either, considering the great 2018 recruiting class that exists, especially in the state of Ohio.

Smith had to let Matta go, as difficult as it was, especially after a highly-touted recruit came out and questioned the direction of the Buckeye basketball program. Ultimately, Holtmann won’t be judged on how he does this season with the bare bones of Buckeye basketball that remains. He will be judged on his effectiveness to recruit for 2018 and beyond, and then how far he’s able to go in rebuilding the Ohio State program.