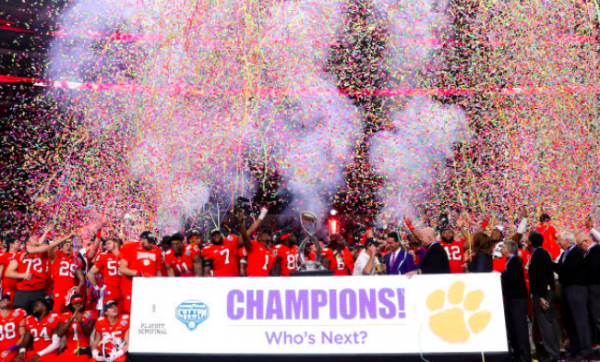 We are now in the fifth year of the College Football Playoff. The Clemson Tigers have competed in four of them, every year since 2014. With a 30-3 rout of Notre Dame in the Cotton Bowl, Clemson will now compete in its third National Championship Game in those five years. Alabama won it all by defeating the Tigers in 2015, but Clemson got its revenge the next year, winning the title in 2016.

Clemson seemed unstoppable in the first half behind true freshman quarterback Trevor Lawrence. Lawrence seems unfazed by any pressure or any situation, as he calmly led drive after drive to begin the game. He and Clemson were not able to pay off much in the first quarter, as the Tigers only managed a field goal in that opening period. The run game wasn’t going well, even behind star tailback Travis Etienne.

As we moved into the second quarter, though, the Tigers began to throw the ball, and all of a sudden Notre Dame had no answers. The Irish secondary could not stop the Clemson passing attack, and it very quickly paid off. Lawrence found Justyn Ross for two long touchdowns in the second quarter, and the Tigers built a 16-3 lead as halftime approached. After a quick Notre Dame drive ended with a punt, Lawrence put together a 46-second, 80-yard touchdown drive to really break Notre Dame’s spirit heading into halftime. Instead of a two-score deficit, Clemson led by 20 points heading into the break.

Notre Dame fought hard to start the third quarter, winning the field position battle early. The Tigers were backed up and Notre Dame had great field position to cut into the lead midway through the quarter. The Tigers defense stood strong, though, and intercepted Ian Book on a long third down. Three runs later, Etienne broke off a 62-yard touchdown, and the game was essentially over.

This result will raise more questions for Brian Kelly and Notre Dame. The Irish spent the lead-up to this game trying to prove this would be different than 2012, when Notre Dame was embarrassed by Alabama in the 2012 BCS National Championship Game. Six years later, we saw more of the same from a Brian Kelly-led team. The offense couldn’t do anything, and the defense couldn’t get a stop.

Of course, we can’t under-sell the Clemson defense here. Even without Dexter Lawrence, the Tigers were almost unbeatable. We don’t yet know who Clemson will face in the National Championship Game. We do know, however, that the opponent will have a strong offense because Alabama and Oklahoma have the two best offenses in the country. No matter who the Tigers face, this defense will need to be lights-out to win. Based on what we saw in the Cotton Bowl, the Tigers should be able to at least slow down whichever high-powered attack they meet.

Whether Clemson wins or loses on January 7th, though, this team has proven plenty this year. Dabo Swinney has put this program in a place where the expectations are national championship or bust. Last year’s disappointing Sugar Bowl loss to Alabama fell short of those expectations. We have no idea what will happen next week, but at the very least there is some semblance of redemption.