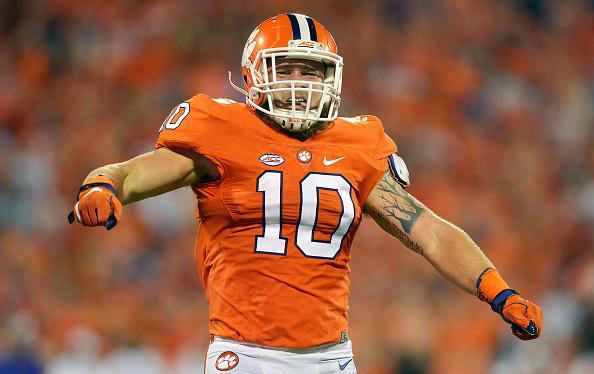 One of the oddest moments in the past month took place during the College Football Playoff Semifinals when Clemson laid the smackdown on Ohio State. It wasn’t even a moment that took place between the whistles, it was an incident that involved a hand going a little too deep into someone’s nether regions.

Oddly enough, Boulware doesn’t see much wrong with the incident. It could be because he was defending his teammate and doesn’t want to draw more attention to it, but how he discussed it only wound up adding to the disturbing nature of the entire thing.

Boulware spoke to the media Wednesday and had a lot to say about what people should think of what went down.

“That stuff kind of annoys me. The game is so serious and it’s so locked in out there, you try to do stuff just to have fun, to break up the seriousness of the game. People are trying to say “sexual assault” — people that say that have either never played football, have never been in a locker room and seen the weird stuff. We’re together every day for years and years and years.

You get very comfortable around each other. I know there’s going to be that one person: “Well, I played football and never did that.” You either sucked at football, you had no friends in the locker room, or you were the person that went in the bathroom stall to go change because you were scared to shower with the team.

We do that stuff just to have fun out there, just to mess with the team. I know none of those players care. I know [South Carolina offensive lineman] Zach Bailey didn’t care about that at all. You saw on film where he didn’t freak out. “Do you all practice this at Clemson?” No, we practice beating [South Carolina] by 49 points. That’s something I did on the side. It’s annoying, because the players don’t care. Like you saw [Curtis] Samuel didn’t do anything at all.

That’s for the media to blow that up. Yes Christian went — he went four fingers deep. He went a little too far. But when I’m just messing with somebody, poking them in the belly button or grabbing someone’s butt, it’s just to break up the seriousness of the game. The people who are freaking out about that have never played the game, or were just losers who didn’t have friends when they played the game.

You can go down this list and point out the multiple statements that are utterly wrong here. First off, his belittling of what happened to Samuel is bothersome. He isn’t consenting to having a hand up his rear end, so yes, sexual assault is the applicable term here.

Even if someone hasn’t been in a locker room, this isn’t acceptable in any walk of life. It doesn’t matter that it took place on a field. Tying together that someone must have sucked at football for them to not understand what Wilkins did is idiotic and asinine. This also seems to go well beyond typical pileups, especially with the intentionality Boulware’s discussing here.

He’s also somehow claiming to speks on behalf of all the players this has happened to, which in and of itself is insane. How has a school been able to get away with this for so long? South Carolina lineman Zach Bailey obviously cared, that is why he sent out the tweet that he did. Likewise with Curtis Samuel. They both couldn’t believe what the hell happened on the field.

Somehow calling everyone a loser for not understanding what happened to Samuel isn’t going to make this go away. It’s not within the parameters of the game and adds a questionable nature to Clemson’s tactics. They’re good enough to go out and beat teams on the field, so why delve into this type of unsolicited gamesmanship?

No one is going to be suspended for the incident, as this seems to not be an issue for the NCAA. But what kind of precedent does it set for the game? It shouldn’t be encouraged and should be actively curbed while the NCAA has a chance.

Who would’ve guessed that these kind of statements had to be said aloud for an athlete to see the flaws in his logic?