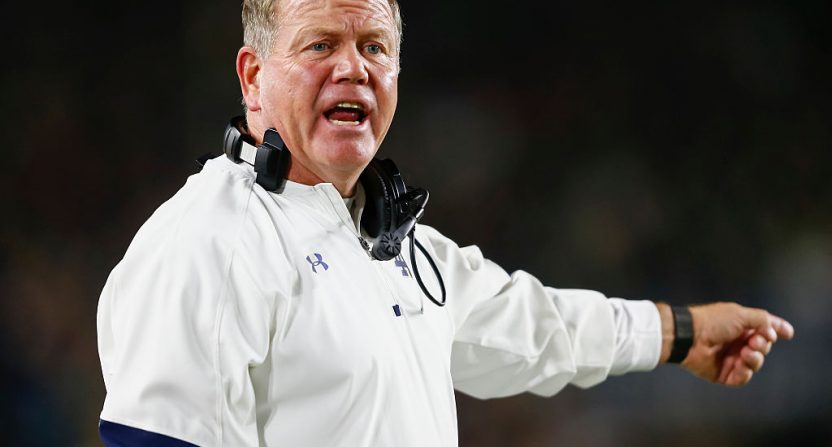 This week, The Comeback’s college football staff was asked to answer not one, but two questions to get the season kicked off in style. Yes, college football officially started last week, but this week just has a more genuine feel to it as every conference gets in the action.

That means everybody pretty much has a clean slate. What will be done with them? Which coaches are on the hot seat and who needs a win in a bad way to get the season off on the right foot?

Who is the team or head coach in the biggest need for a win in Week 1?

Matt Lichtenstadter: The winner between Texas A&M and UCLA is going to feel a lot better about itself heading into the new season. Both coaches, Sumlin and Mora, are going to be under immense pressure this year to turn around their programs after down years with expectations in 2016, and with such a high-profile game to begin the season, there is a lot at stake here for the winner and the loser. The winner is going to enter a tough season with some momentum and good vibes, and the pressure will be heaped upon the loser very, very quickly.

Bart Doan: As bizarre as it sounds to say Notre Dame needs a win against Temple, badly, that’s precisely where we’re at. Don’t let last year’s 4-8 record fool you into thinking that the Irish lack talent. They return good depth at the offensive line position, a healthy amount of playmakers at wide receiver (Equamineous St. Brown being the top one, also possibly having the best name in college football) and Brandon Wimbush could just turn out to be a better fit for the offense than some of their ballyhooed quarterbacks the last few seasons.

All of that sounds good and dandy, plus Temple is having to replace a slew of talent and the guy most responsible for bringing them to their recent success, Matt Rhule, is coaching in Texas now. But aside from the fact that Temple isn’t cannon fodder anymore and Notre Dame went 4-8 last year so naturally, they need a win, the schedule almost demands that if this thing isn’t going to get off the rails for the Irish, they’d best win.

The next game is Georgia before going on the road to rivals Boston College and Michigan State, both of whom always play the Irish tough no matter the records. Then they have a mid-major foe again in Miami (OH) before getting right back at it against North Carolina and Southern Cal. Simply put, talent or not, there simply isn’t much margin for error with that schedule and any slip ups mean more pitchforks being sharpened, coming for the Brian Kelly tenure.

Kevin McGuire.: My focus is centered squarely in California where UCLA and Texas A&M play the second game in their home-and-home deal. Jim Mora and Kevin Sumlin have been two coaches I feel like I have mentioned the most as being in need of a good season to potentially save their jobs heading to 2018. With that in mind, I think it is imperative to get the season off on a winning note with a win.

Of the two, I think Mora will be in more need of the win because I have more faith in the Aggies to go on to have a decent season. But Mora needs a rebound season with one of the top quarterbacks on his roster, Josh Rosen, at a time when the crosstown rival has surged on the national scene. The pressure is rising, and with Chip Kelly on the free agent market, Mora needs to earn his money before the fiscally-restrained UCLA program makes a bold move to pony up for a buyout.

Terry Johnson: Without question, Jim Mora needs a “W” more than any other coach in Week 1. The Bruins limped to a 4-8 mark last year, including an embarrassing 36-10 loss to Cal in the season finale. While Mora’s job probably isn’t in jeopardy just yet, he definitely needs a marquee victory to help turn things around. A win over Texas A&M – which is always tough to beat early in the year – would definitely set the tone for the entire season.

Take a look at the schedule. Which team in Week 1 should be on the biggest upset alert, and why?

Matt L.: Would it really be an upset if Wyoming beat Iowa? The Hawkeyes are not the B1G West champions from a couple of years ago, and they did lose to North Dakota State at Kinnick Stadium last year. But Wyoming has Josh Allen and lost in the Mountain West Championship game last season, and they have the tools to win the conference this year. Going to Iowa is difficult, but this isn’t quite the Iowa team of past years. There is a decent chance that Wyoming goes into Iowa and wins.

Also, Tulsa could give Oklahoma State a good run for their money on Thursday, and because I’m very biased, I think there’s a chance that Texas gets a tough test from D.J Durkin’s Terps too, although both Big 12 teams are still big favorites.

Bart: There’s really a dearth of intriguing games in the first full week of the season for everyone in college football. The ranked teams playing one another are close enough in expectations that any of them winning wouldn’t be a major surprise. And very few ranked teams are even bothering to potentially put a hiccup game on the docket to open things up. Generally, that’s pretty smart.

But if you’re looking for one that might be uncomfortably closer than might be imagined, look no further than old reliable Appalachian State. They play at Georgia and look like they’re arguably the favorite in the Sun Belt, boasting the best defense in the conference last year and 17th overall in the nation. They return experience on offense, particularly in the backfield in QB Tyler Lamb and RB Jalin Moore to suggest they won’t be rattled against a big time SEC foe.

Georgia is plenty good, but this is more about what the Mountaineers have done since plowing into FBS, hitting the ground running. They’re a dangerous foe any time of the year for any team, as we’ve seen, but the element of not really knowing what you have going into week one if you’re Georgia certainly only adds to the possibility ASU takes another big time pelt.

Kevin M.: The game that has suddenly become more intriguing to me is taking place in the state of Colorado. Colorado and Colorado State renew their rivalry for another year in a battle between the Pac-12 and Mountain West Conference, Las Vegas paid close attention to what the Rams just did in their opener. A year after Colorado smashed the Rams in a blowout, this season’s matchup should be much more competitive if last weekend’s showing against Oregon State was any indication.

As I noted on my blog, Colorado opened as a pretty solid seven- or eight-point favorite against the Rams depending on which sportsbook you checked. Since Colorado State’s impressive debut against the Beavers on Saturday, the line has shaved 1.5-2.5 points off the spread, and it may even drop more between now and Friday. Colorado State might even win the game outright if Colorado is not careful.

Terry: I’m putting East Carolina on upset alert. Sure, the Pirates will be a much better team this year, but they cannot underestimate James Madison. The Dukes won the FCS championship last season, defeating five-time defending champion North Dakota State in the process. Considering that most of JMU’s top players return this fall, it definitely has enough firepower to pull off the upset. Keep an eye on Georgia Tech transfer Marcus Marshall, who averaged 6.5 yards per carry last season.

That’s what we have to say. Now it’s your turn! Tell us which coach needs a win the most in week 1 and what team should be on upset alert this weekend in college football by leaving a comment below or sharing your response with us on Twitter.