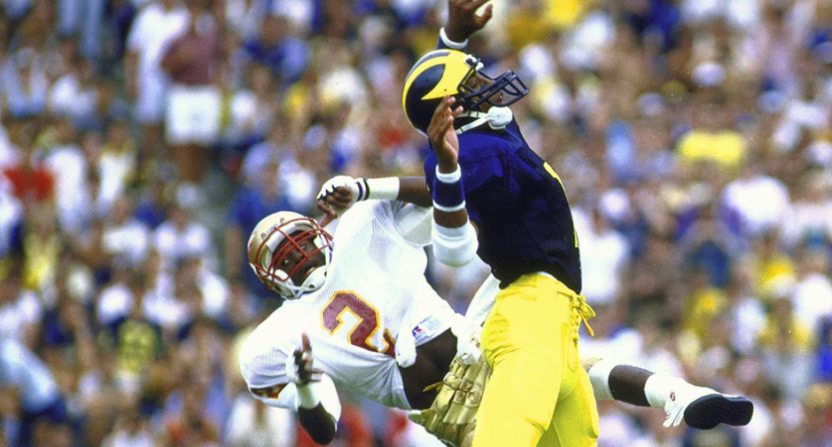 In the next couple of weeks, college football fans will flock to the stadiums of their favorite college football programs, whether it is at a Big Ten stadium with over 100,000 people, in the southeast with the passion and tailgates of the SEC, or at the local Division II program playing out of the national spotlight.

Regardless of where the games are being played, fans will be eager to celebrate the start of a brand new college football season. Most of the fans making their way from their tailgate party to the stadium will have gone through this routine countless times over the years, but somebody out there will be attending their first college football gam, and could be walking away with memories that will spawn many more to come.

So with that in mind, our roundtable discussion this week focuses on our first college football games attended. Let the memories flow.

Matt Lichtenstadter: My first college football game was Navy-Rutgers in Piscataway in 2003. Rutgers won 48-27, and I don’t remember much about it if at all. I didn’t go to another college football game until my freshman year at Maryland, and that was a thriller: Maryland beat William & Mary 7-6. My first two games weren’t exactly games that will be remembered for posterity in the annals of college football, and somehow I’m now writing about the sport after my first in-person introduction to it was early Greg Schiano Rutgers football. There is beauty to be found in even the ugliest of things, it turns out.

Sam Blazer: I was six years old and I remember absolutely nothing about the game, but my very first game was Nov. 21, 1998. I sat B deck at Ohio Stadium when Ohio State and Michigan faced off. It was one of the rare times that John Cooper actually won against Michigan, 31-16.

I was told that it was a cold, cold day and my eyes were as big as saucers. One of my favorite athletes ever (and to this day) is Joe Germaine, who was the quarterback for Ohio State that year. Germaine would go on to the NFL and bounce around but when he was at his peak, I remember that he began my fascination with football. It didn’t hurt that my parents met him at a Bob Evans where he wrote “To my biggest fan, Sam” next to his signature.

It is a big reason why college football is one of the greatest games around. The love of the game is evident in each player’s every move and the impact they make on people like myself is everlasting. A game I don’t remember is etched into my soul and it will be until the day I die. How often can you say that about a sport?

Phillip Bupp: I’m assuming my story will be the least entertaining, but my first (and only) college football game I have attended was an Army-Temple game at Lincoln Financial Field in 2013. It wasn’t the kind of atmosphere that rivaled a top program, but was still pretty good and people seemed to be having a good time. The game wasn’t great, featuring two teams with one combined win, I think, at the time but I got a free front row seat and it’s always great to see any of the armed forces play live. Now I need to get to some more games.

Kevin McGuire: The first college football game I ever attended was back in 1991. I was actually still a few more years away from being interested in sports, but my dad decided to take me out to a game the day Penn State hosted Cincinnati in Beaver Stadium, years before it had any upper decks and the Nittany Lions were two years away from joining the Big Ten (yes, this was a time the Big Ten actually had 10 teams). Penn State ripped Cincinnati to shreds and won by a score of 81-0.

On the drive home, my dad said to me “Don’t ever expect to see that again.” I haven’t.

Terry Johnson: The first football game I went to was back in 1982. My 60-pound Pop Warner team had an 8 a.m. kickoff that day, so our coach decided to surprise us with a trip to see Georgia Tech play Duke that afternoon. Since I was only eight years old at the time, the only thing I really remember is that the Blue Devils beat the Yellow Jackets, 38-21. Interestingly enough, Steve Spurrier was the offensive coordinator for Duke that season, before moving on to the Tampa Bay Bandits.

The first – and only – college game that I worked from the press box was the 2012 SEC Championship Game. Alabama and Georgia went back and forth throughout the afternoon, with the Crimson Tide coming up with a crucial stop in the closing seconds of the game. While many criticized Mark Richt for not spiking the ball and regrouping before running the final play, I have no doubt that he did the right thing by snapping the ball quickly to play for the victory. There was so much pandemonium going on that the Dawgs clearly had the element of surprise.

Ian Casselberry: I was pretty lucky for my first college football game, though I didn’t realize it at the time. If I only knew then what I know now. Michigan hosted Florida State on an absolutely beautiful day in 1986. My best friend’s grandmother had season tickets on the press box side of Michigan Stadium around the 40-yard line. I’ve probably had seats that good maybe only once or twice since then.

What I remember most is walking into Michigan Stadium and the bowl going down into the ground, allowing for a structure that is far bigger than it looks from outside. And all those people. Records say attendance was 105,507 that day. Then the uniforms. Florida State’s helmets gleaming under the sun, and Michigan’s maize and blue popping against the green field. I knew Michigan won that day because it’s a happy memory, but I had to look up the final score, 20-18. How could a kid not be hooked after that?