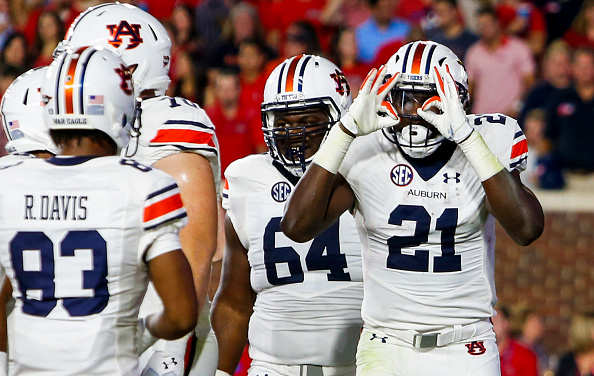 Each week, before the college football rankings come out, we at The Comeback will give you a look at our predictions for upcoming rankings. These aren’t just based on our opinion of what the Top 25 will look like. It’s also based on trends regarding how the voters have treated similar teams in the past.

Here’s the outlook on college football’s rankings after Week 8 action.

.@ChaseAppleby with the strip sack and the ball goes out of the endzone for a safety! Pokes 30, #13 Boise State 28! 1:25 left! #GoWyo pic.twitter.com/Dvpclf6kHr

The Broncos don’t play until Tuesday, but they got their biggest win of the year in the form of a Wyoming upset of Boise State. That win probably pushes WMU to the top spot among all Group of Five teams, meaning as long as the Broncos finish the season undefeated, they will almost certainly go to a New Year’s Six bowl. What a win for the MAC.

Another big move for a team that didn’t play today, thanks to all of the big losses in the middle of the rankings. LSU has been on fire ever since firing coach Les Miles, and the Tigers head into a matchup with Alabama that could be closer than anyone expects. The first two losses of the season — against Wisconsin and Auburn — came before LSU switched coaches. With the new staff, the Tigers might have a top five team on their hands.

⚠️WARNING⚠️ | Highlights may contain plays that make you fist pump, jump out of your seat and yell “War Eagle!”#EarnIt pic.twitter.com/aaE2Hf1GpK

Just two months after coach Gus Malzahn was firmly on the hot seat and losing to Clemson to start the season, Auburn is suddenly one of the hottest teams in college football. The Tigers walloped Arkansas, 56-3, last week, then beat Ole Miss, 40-29, this week. Malzahn finally has his offense clicking, and Auburn could be feeling very good heading into a late-season showdown with Alabama.

Tennessee (No. 18 to unranked)

Remember when Tennessee looked like a team of destiny, pulling victories out of its nowhere left and right? Well, the Vols have now lost three straight, including a terrible 24-21 loss to South Carolina, and they are two games back in the SEC East. It’s starting to look like the Vols weren’t just an unfocused group in near-losses to Appalachian State, Florida, Georgia and others. This just isn’t that good of a team.

Baylor almost managed to get to November undefeated, yet without playing any of the Big 12’s best teams. The Bears came into this weekend’s game against Texas still having to play Oklahoma, West Virginia and TCU, so it needed a win. Instead, the Bears laid an egg and showed in their toughest test of the year to date — and not an incredibly tough one, at that — they aren’t the power they have been the past few seasons.

This looked like the year that Boise State would return to its glory days of the mid-2000s. But after losing to Wyoming, the Broncos are fairly far out of contention for a New Year’s Six bowl, and they aren’t even winning their own division. The Cowboys are underrated, but losing to Wyoming, of all teams, is going to cost the Broncos.

5 games to watch next week

Ever since the turn of the decade, this has been the Game of the Century of the Year, and it’s more important this season than it has been in quite some time. In a weak slate of games, this is the clear game to watch.

Nebraska probably needs to beat Ohio State to keep its dream of a Big Ten West championship alive, while Ohio State is just trying to get through the season to the Michigan game, which could be a College Football Playoff play-in game. This game will go a long way toward figuring out the championship pecking order.

Kentucky is a half-game back in the SEC title race. Yes, that Kentucky. The bad Kentucky. I’m not sure this will be a good game, and it probably won’t. But you can watch Kentucky further lay claim to the SEC East, which will be hilarious.

4. No. 7 Wisconsin at Northwestern

This game could be sneaky good. Northwestern has had an offensive resurgence in recent weeks, and the Wildcats gave Ohio State a run for its money in the Horseshoe. Wisconsin has yet to clinch the Big Ten West, and doesn’t even control its own destiny, so it needs a win against the Wildcats. However, Wisconsin hasn’t won in Evanston since 1999. Sports are weird, so we’ll see what happens in this one.

Once again, this is a very bad slate of games. Maybe watch Iowa-Penn State? Or TCU-Baylor? Or Vanderbilt-Auburn? Or you can avoid those meaningless games and instead see how Tennessee lets Tennessee Tech stay in the game. That sounds like much more fun.