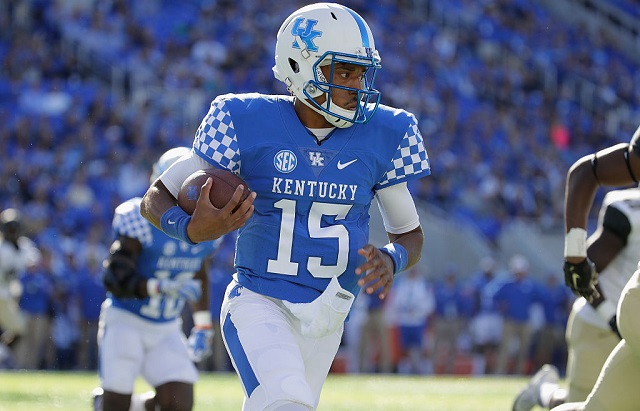 The SEC East is bad. It’s really, really bad. Only one team in the division is in the top 25, and that’s Florida at No. 22. Only one other team (Tennessee) is even receiving votes. The division is so bad that were it not for a close loss to Georgia, Kentucky (!!!) would be in the driver’s seat for the division title.

So far, the SEC East has only yielded complete and utter chaos. Tennessee looked like the runaway favorite, beating Florida and Georgia, before it lost to Texas A&M, Alabama and, inexplicably, South Carolina. Then Florida took the reigns before losing by 21 to Arkansas, the fifth-place team in the SEC West. So right now, here’s where we stand:

None of these teams are going to make much noise in the postseason, so we’re going to craft a chaos scenario that ends up with a tie atop the division. Here’s how it happens:

Okay, so it’s extraordinarily unlikely that happens. But if it did, these would be the final SEC East standings:

I have no idea what the tiebreaker is in that scenario (apparently South Carolina would win), but I do know that it would be awesome, so root for that to happen. And if it can’t, root for Kentucky or another underdog to win the division, because that’s exactly what the SEC East deserves this year.

Idaho is the underdog of the year

Earlier this year, Idaho announced that it would become the first team to drop from the Football Bowl Subdivision to the Football Championship Subdivision. The move made sense for a lot of reasons, not the least of which is that Idaho has been terrible at this level of football for a very long time. But it also made sense because the Vandals don’t really have a conference.

Idaho currently plays in the Sun Belt, despite definitely not being in the geographical area typically considered the Sun Belt. The University of Idaho isn’t even in the sunniest belt of the state — it’s way up north near Canada, in a place aptly called “Moscow,” which is definitely not Sun Belt-y.

In 2018, Idaho will move to the Big Sky Conference, where it probably should have been all along. But in the meantime, the Vandals are actually playing the best FBS-level football they’ve played in years. Idaho is 5-4 and on-track to make its first bowl game since the 2009 Humanitarian Bowl — a game that doesn’t even exist anymore. The Vandals need just one more win out of three games to make the postseason, and their last three games come against three of the worst teams in the Sun Belt.

However, the culture at Baylor clearly hasn’t changed, as some people are still prioritizing winning and the football program over the safety of students on campus. Ahead of Saturday’s game against TCU, people from all parts of the program made statements supporting Briles. Briles’ former assistant coaches, who the university inexplicably allowed to stay on staff, wrote a statement on Twitter defending him. Players tweeted that the team wore black uniforms to honor Briles (the team denied that’s why they wore black). Fans sold and wore shirts specifically honoring Briles at the game.

When it was all said and done, Baylor got demolished at home by rival TCU, 62-22, and man, did it feel good.

Sports do not accurately reflect real-life karma. Sometimes, bad people win. But this is a team that has shown little (if any) remorse and continues to employ assistant coaches who were complicit in covering up sexual assaults, so it’s going to always feel good when the Bears lose.

If Baylor were to really be serving its so-called educational mission, it wouldn’t even have a football team this year, and every day the school fields a team with this staff, it’s doing a disservice to survivors who feel that they can’t report their rapes because football is above the law. If the Bears getting knocked back into football oblivion is any consolation, then it can’t happen soon enough.