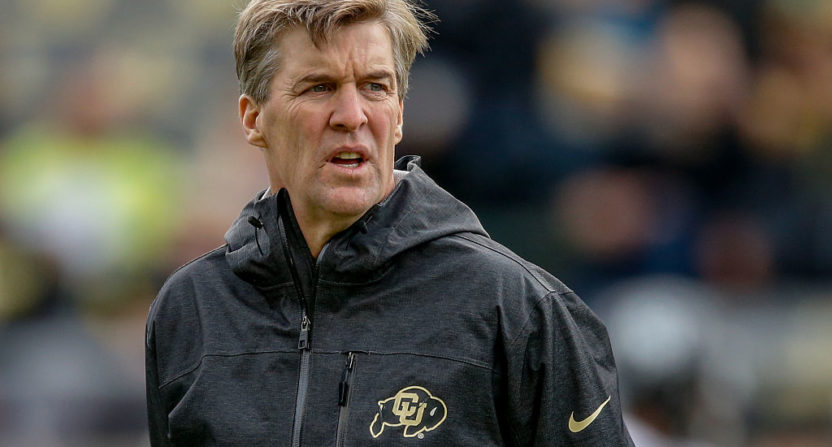 Colorado Buffaloes head coach Mike MacIntyre has now been personally named in a lawsuit alleging he covered up allegations of verbal and physical domestic abuse against a former assistant. The assistant involved is former safeties coach Joe Tumpkin, who was briefly Colorado’s defensive coordinator after Jim Leavitt left before their bowl last year. He was suspended and placed on administrative leave January 6 before resigning January 27.

Pamela Fine alleges she suffered years of abuse at the hands of Tumpkin and tried to notify MacIntyre, but he and others didn’t properly address the situation; the university’s own investigation also concluded that on June 13,  leading to chancellor Phil DiStefano being suspended for 10 days and MacIntyre and athletic director Rick George being reprimanded and donating to domestic violence charities. Fine filed a notice of claim announcing her intention to sue the university in May, and it became public when the student newspaper The Daily Camera published it May 31.

The woman’s attorney, Peter Ginsberg, said at first she did not wish to pursue a lawsuit, but changed her mind when “it became clear to her that the University had no intention of taking the matter seriously.”

“This is no longer about protecting the man who abused me and the powerful men who decided not to do what they were morally, contractually, and legally required to do,” said Pamela Fine, the alleged victim, in a statement provided by Ginsberg. “I am no longer protecting the men who silence victims in the name of winning football games.”

Colorado spokesman Ken McConnellogue provided this statement in response to the lawsuit: “The claims in the lawsuit are not well founded factually or legally and we will defend our employees aggressively.”

Tumpkin was charged with five felony counts of second-degree assault and three misdemeanor counts of third-degree assault in a domestic violence case, the district attorney for Adams and Broomfield counties in Colorado announced Jan. 31. The charges allege Tumpkin “used his hands as a deadly weapon, caused bodily injury and strangled” Fine in multiple incidents between February 2015 and November 2016.

A preliminary hearing to help determine if the case will proceed was scheduled for June 22, according to a spokeswoman for the 17th Judicial District Attorney’s Office; however, the Daily Camera reported that hearing was canceled due to a dispute over how much access Tumpkin’s defense team should have to Fine’s cellphone records.

The university-commissioned investigation by lawyers from Philadelphia firm Cozen O’Connor found that MacIntyre did tell George about these claims and that he told DiStefano, and there “was no intent on MacIntyre or George’s part to ignore or hide the report of abuse,” but that DiStefano didn’t tell the university’s Office of Institutional Equity and Compliance, leading to his 10-day suspension. However, that May notice of claim questioned the response of MacIntyre and other CU officials:

Around the beginning of December, the woman said she emailed MacIntyre asking him to call her about a “a very confidential matter” concerning Tumpkin. In the document, Ginsberg alleges MacIntyre’s assistant deleted this email, and claims the assistant had a “personal relationship” with Tumpkin and access to MacIntyre’s email account.

Ginsberg also writes that the abuse, alleged to have taken place between February 2015 and January 2017, happened in university-provided lodging at the Broadmoor Hotel and Resort during a CU-sponsored trip for a team dinner with boosters and regents, and other hotels in Boulder and across the country.

Verbal abuse also occurred on university property and on a cellphone that CU provided, according to the notice of claim.

“Both university employees and supervisors were aware of the abuse of (redacted) at certain times. University personnel did not properly report or address these issues,” Ginsberg wrote.

In the claim, the woman’s lawyer said Tumpkin’s abuse was aggravated by a drinking problem, which he alleges CU officials knew about — including drinking while driving — and that they did not properly report or address these issues.

Colorado’s board of regents voted to confirm MacIntyre’s extension in July after the university-commissioned report concluded he had “no intent to ignore or hide the report of abuse.” And the university statement above of “we will defend our employees aggressively” suggests they plan to stick with him and the other officials named here. But at the very least, this lawsuit could still present them with a perception problem, and it could perhaps lead to further problematic revelations of how the university handled Fine’s allegations. We’ll see what comes of it.