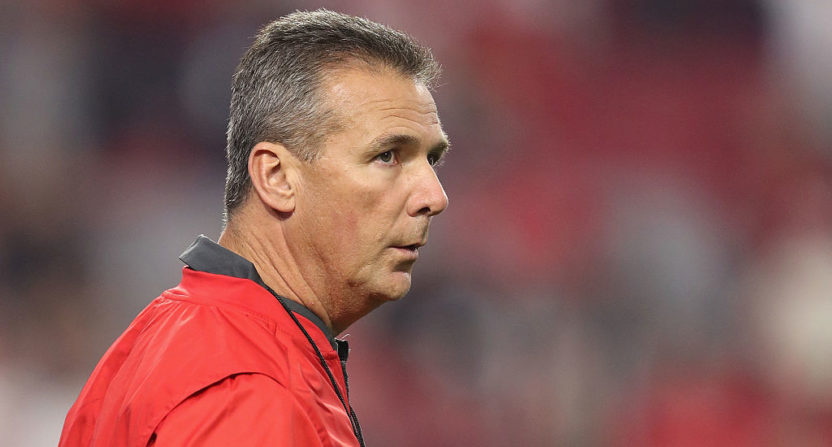 In an exclusive interview by Brett McMurphy, Courtney Smith, the ex-wife of Ohio State assistant coach Zach Smith who revealed she was physically abused by Smith, provided text messages between the coaches wives that showed head coach Urban Meyer knew about this abuse as it was ongoing, contradicting Meyer’s statements from Big Ten Media Days last week that he was unaware until when he fired Zach last week.

Meyer claimed he was unaware of two separate incidents where the police were called on Zach back in 2015 for alleged domestic violence. Zach remained on the team and Meyer said last week that if he had known about this before McMurphy’s original report was made public last week, he would’ve fired Zach years ago.

Courtney called “BS” on that and revealed that Meyer’s wife, Shelley, as well as the other coaches wives knew about it all this time. In fact, Courtney provided text messages between the wives, including Shelley, that said she knew and would tell Urban about what happened. McMurphy provided screenshots of those texts in his story on his Facebook page.

Shelley: “I am with you! A lot of women stay hoping it will get better. I don’t blame you! But just want u to be safe. Do you have a restraining order? He scares me”

Shelley: “Geesh! Even w the pics? Didn’t law enforcement come to your place ever??”

Courtney also provided pics of her being bruised and bloodied allegedly at the hands of her ex-husband.

In a November 5, 2015 text exchange between Courtney and Lindsey Voltolini, wife of Ohio State’s football operations director Brian, it showed that Meyer knew enough to talk to Zach about what happened, which Zach denied.

Courtney: “(Zach’s) trying to make me look crazy bc that’s what Shelley is saying (he’s doing)”

Lindsey: “He (Urban) just said he (Zach) denied everything”

Courtney: “I hope urban is smarter than that”

Lindsey: “He (Urban) doesn’t know what to think”

That wasn’t even the first time that Zach was allegedly beating his wife. Courtney revealed that it happened as early as 2009 when Zach and Meyer were coaching at the University of Florida. A police report said that a drunk Zach “picked (Courtney) up, by grabbing her T-shirt and threw her against the bedroom wall.” This was while Courtney was pregnant at the time and it was their first anniversary. Courtney was told to drop the charges by Meyer’s “life coach” Hiram de Fries and Zach’s grandfather Earle Bruce because pursuing charges would mean that Zach wouldn’t be able to coach again.

A possible loss of employment as a result of reporting what happened is a reason why some women in abusive relationships don’t say anything. Because the wording of the law does all it can to suppress the abused person to the point that they either pretty much have to be dead or have someone else witness the act firsthand for police to actually do anything meaningful and if those public reports cause someone to lose their job, chances are it would make the situation at home even worse. So there isn’t much that the abused person could do and that’s a reason why many don’t even bother reporting it

When Courtney was trying to get a divorce, Zach texted her some threatening messages and those screenshots were posted in McMurphy’s story.

Zach: “The past 3 months. You were going to try to give me a chance a week ago and now, even though I have done NOTHING WRONG since then, you’re done with me. I will kill that bitch and everyone involved. For ruining my life. I am getting myself right and getting punished. F— all of you.”

Zach “Just know that now… I will find you when your out. I will come seek the douche your with. I will f— him up to the point that no one will recognize him”

I would say that protecting someone like Zach Smith would be enough for Urban Meyer to lose his job but I honestly don’t know at this point. Ohio State is a school who protected a doctor after he molested a bunch of athletes for decades and when some of them tried to say something, not only did the wrestling coaches from back then not do anything about it but one of those coaches is trying to be the next Speaker of the House. But yet, this is a school who fired Jim Tressel because his players gave away merchandise that they themselves received, for tattoos. So Ohio State’s priorities seem a bit backwards.

I think Urban Meyer is lying and he knew all about this and didn’t do anything because football is more important than anything, especially when it comes to college athletics. But let’s just say that in some bizarro universe, Meyer is actually telling the truth and knew nothing about Zach’s alleged domestic violence accusations over a seven-year period. Just like previous college coaches like Rick Pitino or Joe Paterno or any other college coach who claimed ignorance when the shit hit the fan on their programs, what they’re saying when they claim they knew nothing is that they are the stupidest person alive for being completely ignorant about what is going on in their program when for some reason, everyone else knew all about it.

So Urban, take your choice. You either knowingly covered up a domestic abuser for football reasons and only fired him when you were caught or you’re a complete idiot who didn’t know a thing about the people in your program and was the last person on the program who knew about this. For a head coach, either excuse you go with should end with a pink slip. Ignorance is no longer an excuse.