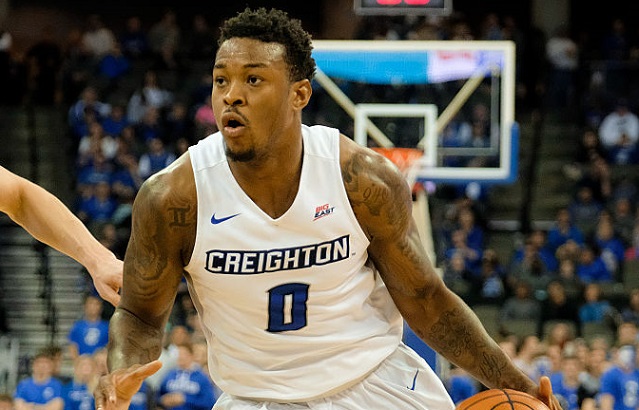 Although some folks in Omaha, Nebraska enjoyed Denver Broncos quarterback Peyton Manning yelling the city’s name at the line of scrimmage during the 2013-14 NFL season, Creighton men’s basketball compelled many others to celebrate the city for the team’s sweet shooting touch. The Bluejays (28-7, 14-4 Big East) ranked No. 2 in the country in field goal percentage (49.7), led by forward Doug McDermott, who walked away with the consensus national player of the year with a Division I-high 26.7 points per game.

Despite losing to Baylor in the third round of the NCAA Tournament, now-junior guard Marcus Foster says he and his teammates constantly hear about that season from fans and members of the athletic department alike. It was the last time Creighton made a March Madness appearance.

“We wanna be just like them, if not better,” Foster said.

Well, No. 10/10 Creighton currently sits No. 2 (53.8 percent) in field goal percentage. While there’s a handful of games to go before officially replicating the impressive mark of the 2013-14 team, the Bluejays still possess a similarly loaded roster, which has carried them to an undefeated record (9-0) to begin the 2016-17 season. Yet their success has been achieved in a slightly different manner on the floor, helping them to emerge as one of the elites in college basketball.

Given its three-point output so far, head coach Greg McDermott’s bunch is on pace to hit close to the same number of triples (338) as the squad from three campaigns ago (357). But that core was built solely around spreading the floor because of a lack of size. McDermott’s son and fellow forward Ethan Wragge both stood at 6-foot-7 and tended to fill the two frontcourt positions.

Now, three players (6-foot-8 Cole Huff, 6-foot-10 Toby Hegner and 7-foot Justin Patton) in the Bluejays’ rotation allow McDermott to cause extra fits for opposing defenses with an undisclosed shot selection. Nevertheless, the mystery is spun from point guard Maurice Watson Jr.’s fast-twitching fingertips. He slots in at No. 2 in the nation in assists per contest (8.8), rendering one of the best pure playmakers in DI.

“He (Watson Jr.) really is the engine that makes us go,” McDermott said. “Without him, we’re not the same team.”

According to the seventh-year coach, teams struggle with defending Watson Jr. off the dribble since he can attack the paint himself. In their latest matchup versus arch-rival Nebraska, the 5-foot-10, 175-pounder took a season-high 20 shots without attempting a three-pointer. Overall, he produced 25 points and eight assists. Albeit a charitable mindset, the senior has accumulated a career-high percentage from behind the arc (53.8), as well as placing second on the team in scoring (13.4 ppg).

Luckily, Watson Jr.’s most well-known companion stands with him in the backcourt. The aforementioned 6-foot-3, 210-pound Foster originally transferred from Kansas State to compete in a more high-tempo system. Although the Texas native had interest in Creighton during his high school days, he says the opportunity to play with Watson Jr., who left Boston University after his sophomore campaign, seemed like a tailor-made situation.

“They’re (Watson Jr. and Foster) best friends, and they’ve been great for each other,” McDermott said.

Even though Foster couldn’t suit up last season as a result of NCAA transfer rules, he and Watson Jr. instantly bonded in his first summer at the university. He says the two spent nearly every day together, exchanging past experiences from the court. Unfortunately, several weeks later, Foster suffered a partially torn MCL in the season’s second practice, which forced him to miss two months.

Following a strenuous rehab, he focused on improving his shot with assistant coach Steve Lutz. As a sophomore, Foster shot just 38.8 percent from the field, along with a 34.7 percent clip from the perimeter. Once the 2016-17 season tipped off, however, Foster was prepared to wreak havoc with a newly-refined jumper. He currently owns a 50.4 percent shooting clip and is hitting 40.4 percent of his shots via downtown, good for a team-high 18 points per game.

Furthermore, Foster’s unparalleled connection with Watson leaves defenses continuously flustered. In particular, against Buffalo, he received an inbound pass at the perfect point in mid-air from the floor general and proceeded to convert it into a sledgehammer dunk.

“We’re (he and Watson Jr.) the best backcourt in the country,” he said.

Beyond those two, sophomore guard Khyri Thomas has added an unnoticed punch that won’t necessarily materialize on the Blue Jays’ stat sheet. In his freshman campaign, McDermott says the 6-foot-3, 205-pounder failed to show enough effort on the defensive end. But from the get-go this season, the head coach felt at ease clamping the underclassman onto an opponent’s best scorer.

For instance, in their pivotal affair against then-ranked No. 9 Wisconsin, Thomas helped hold Badgers’ guard Bronson Koenig to an unusual 3-of-13 performance from deep. He even demonstrated his prowess on the other end, notching a team-high 18 points on 6-of-8 from the field. Plus, his effort aided Creighton’s rise in the AP Top 25 Poll, maneuvering the program to the then-No. 12 spot.

Creighton's backcourt of Foster and Watson gets a lot of love but Khyri Thomas needs to be mentioned more often. Been solid in every game.

Evidently, Watson Jr., Foster and Thomas aren’t the only ones boasting splendid shooting numbers. As a team, Creighton has combined to generate at least a 50 percent mark from the field in each contest, entrenching itself as the only program in college basketball to do so. That includes a season-high 60.6 percent clip in a 112-94 rout of North Carolina State in the Paradise Jam, where seven Bluejays scored in double-figures, led by Huff’s 20 points on an efficient 6-of-10 shooting.

“Our offensive efficiency has been off the charts,” McDermott said. “I don’t think I’ve ever had a team that’s had an eight-game stretch that has done that, let alone to be able to do it to start the season.”

In the post, the aforementioned Patton gives Creighton a rim protector to combat frontcourt-heavy opponents. But his impact should be credited to McDermott’s stressful decision to redshirt him a campaign ago. According to the coach, the Omaha native weighed in at 205 pounds, needing to tone-up. Additionally, his skillset on the block wasn’t expected to induce much fear.

Not many 7-footers are running the floor and making catches in traffic like Justin Patton in college hoops. pic.twitter.com/RyJyN0wPgG

Nonetheless, after tacking on 25 pounds and refining his offense, he’s delivering a hot-hand in the shooting department. Through nine contests, the freshman has racked up 12.8 points per contest on 80.3 percent from the field (No. 3 in the country). On top of that, his unforeseen quickness and soft hands in transition provides the Bluejays with yet another explosive threat.

Less than a month away from Big East play, Creighton and the defending national champion Villanova Wildcats own the only spotless records in the conference. However, the league also contains some of the top programs in the nation, boasting four teams in the AP Top 25 and USA Today Coaches Polls. Head coach Jay Wright’s unit sits No. 1 in both.

“Everyone wants a piece of Villanova,” Foster said.

Even with a team presumed to undergo another hike in the rankings, McDermott knows unanticipated losses can still occur, as happened with the 2013-14 Bluejays. Hence, he demands Creighton takes a game-by-game approach until the appropriate spotlight arises.

“I’d much rather be in this position in March than in December, so we’ve got a long road to go,” McDermott said.