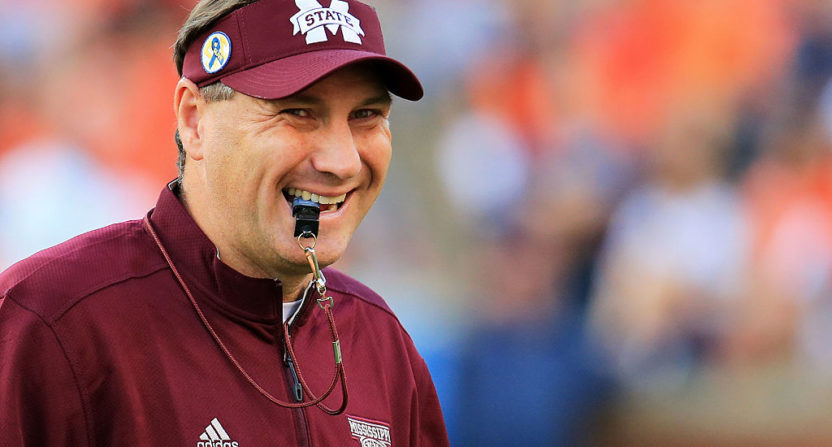 As Tennessee fans fumed Sunday over reports that the Volunteers had hired Ohio State defensive coordinator Greg Schiano, Florida supporters were greeted with more agreeable news. Their school, according to various reports, is finalizing a deal to make Mississippi State’s Dan Mullen the next Gators coach.

Mullen will take over for Jim McElwain, who was fired last month as Florida stumbled to only its second sub-.500 season since 1979. Mullen served as Gators offensive coordinator, from 2005-08, which worked out pretty well for everyone involved.

Florida is working on finalizing a deal to make Dan Mullen its next head coach, a source told ESPN's Chris Low.

The Gators offense excelled when Mullen was their OC/QBs coach from 2005-08, winning a pair of BCS national titles in that time. pic.twitter.com/GNEKNCnFq6

Florida reportedly pursued former Oregon coach Chip Kelly, who wound up at UCLA, and Central Florida headman Scott Frost, who remains a candidate for Nebraska, before settling on Mullen. As compared to those two, Mullen, 45, is not the sexiest hire for Florida. He’s not a young up-and-comer or a big name from another top school. He’s just a steady, well-respected coach who has won 60 percent of his games at Mississippi State over nine seasons leading the Bulldogs.

Before Mullen showed up in Starkville, Mississippi State was an SEC doormat. With him in town, the program reached seven (soon to be eight) bowl games. Not once under Mullen did the Bulldogs finish with a record as bad as the one Florida just posted.

Given that Mullen is staying in the same conference and, in fact, moving to an easier division, there’s no reason not to expect him to improve on the results he produced at Mississippi State. Yes, expectations are higher, but with better facilities, a robust network of boosters and the weight of a flagship university in a football-rich state, Florida should be a far easier job for him than Mississippi State was.

In the end, Mullen isn’t a swing-for-the-fences choice. He’s a safe, low-risk hire for a program that desperately hopes to escape a disappointing recent rut. You know what you’re getting with the Mississippi State coach, and it’s pretty damn good.

Oh and if you were wondering, Florida goes to Starkville on September 29, 2018.