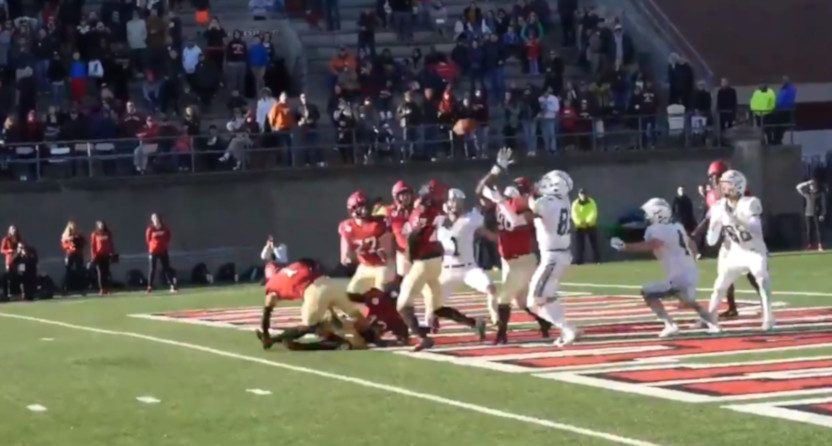 You may not be paying much attention to the weekly developments inside the Ivy League unless you hold a diploma from one of the academic powers, but the Dartmouth Big Green and Harvard Crimson turned in a defensive battle that was completely overshadowed by the way this one ended. Dartmouth kept its undefeated record in play thanks to a 9-6 win on a miraculous final-play Hail Mary pass from Derek Kyler to Masaki Aerts.

It’s the play everyone is clamoring to see! Derek Kyler with the @JPosnanski Houdini effort to escape the rush, Masaki Aerts hauls it in for the GW TD in the end zone as time expires! #DartFB @IvyLeague #SCTop10 #IvyTop5 pic.twitter.com/TzSDrWxDsY

That’s not a great look by the ESPN+ broadcast to miss the actual catch live, as many noted:

Sometimes you get what you pay for, and your $5/mo for ESPN+ means that when Dartmouth beats Harvard on a hail mary, it happens offscreen. pic.twitter.com/0Nb3JXS9Ek

Cameraman, you had ONE JOB! 😡

Dartmouth beats Harvard on a walkoff Hail Mary, but you'll have to take our word for it! pic.twitter.com/jjcWvah1FZ

Did anyone see the Hail Mary ending between Dartmouth and Harvard? Me neither… pic.twitter.com/D3l5znNNyA

And how about this little nugget of information? That was the first touchdown pass caught by Aerts at the NCAA level. On top of that, this was his only catch of the afternoon, and just his fourth reception of the season. (This was just his third game for Dartmouth this season, according to his game log on ESPN.com. He has also competed in track for the Big Green).

The last-second thriller of a victory sets up a big matchup in the Ivy League next week when the Big Green host undefeated Princeton. The Tigers did their own part to stay undefeated thanks to a 21-7 victory over the Cornell Big Red on Friday night. On a day that will feature clashes of undefeated teams in the SEC (Alabama-LSU) and Big Ten (Minnesota-Penn State), this matchup of undefeated Ivy League teams should be a good one as well.

But unlike those games in the Big Ten and SEC, there will be no playoff hopes riding on the outcome that could determine the Ivy League champion. The Ivy League prohibits its football champion from participating in the FCS playoffs. Maybe Dartmouth would get run over by North Dakota State, but maybe not!

Who wouldn’t want to see the Ivy League champion get a chance to make a run? The Ivy League has had some good teams over the years. Maybe not North Dakota State or James Madison good, but certainly worthy of a spot in the FCS field. Maybe someday that rule will change. Until then, Dartmouth will simply try to stay undefeated this season and cherish the moments along the way like this one against the Crimson.