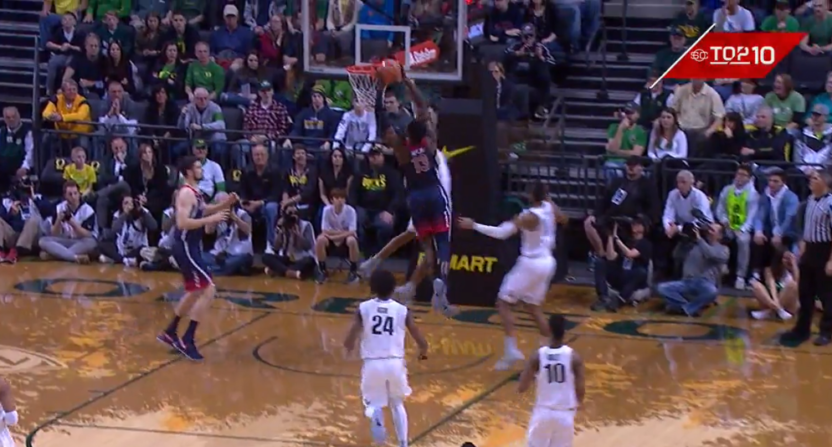 Sean Miller is not coaching Arizona in their game against Oregon tonight, following reports that the FBI intercepted phone conversations Miller had with Christian Dawkins, an associate for ASM Sports agent Andy Miller. In those conversations, Miller and Dawkins reportedly discussed paying DeAndre Ayton $100,000 to ensure the star recruit would commit to Arizona.

Despite Miller not coaching the game (and perhaps never coaching another game), Ayton is playing for Arizona. In a controversial decision, the university announced on Saturday that Ayton will be eligible to play the rest of the season for the Wildcats.

And not only is Ayton playing in tonight’s game against Oregon, but he is absolutely dominating. The projected top pick in the upcoming NBA draft had 17 points and 11 rebounds at halftime, and one play he had in the first half was particularly ridiculous.

The 7’1″ freshman showed off his crazy athleticism by bringing the ball up the floor and going right to the hoop for a vicious posterizing dunk on Oregon:

And in the final seconds of the half, Ayton had a tremendous effort on the offensive boards to get this and-one:

It will be interesting to see if the NCAA steps in on any potential punishment with Ayton, but Arizona will remain a national title contender as long as they have this monster on the floor.

Ayton’s attorney released a statement on Saturday saying that Ayton and his family are “disgusted” by the allegations.

Arizona freshman DeAndre Ayton was questioned by FBI about alleged pay-for-play scheme and denied knowledge; his attorney asks for FBI and NCAA to clear his name pic.twitter.com/9cBJzPZQm8