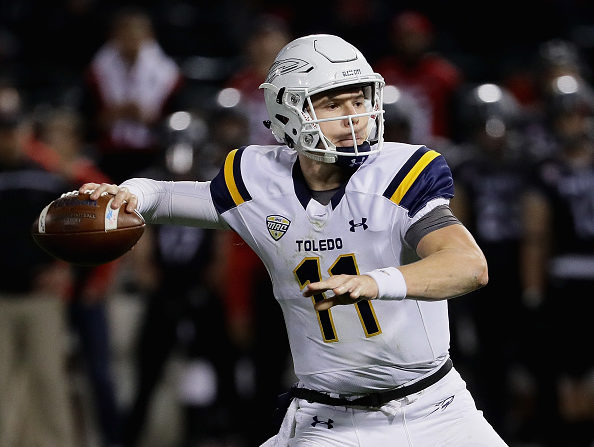 The Toledo Rockets took control of the Mid-American Conference race last week, jumping up to 5-0 in league play and 8-1 overall. For most onlookers, that doesn’t seem like a big deal. Toledo has long been a steady program and their success is far from surprising. The school has produced four future power conference coaches since 1990, and current head man Jason Candle might be the fifth.

Toledo has also had just four losing seasons in that stretch.

And yet, despite a consistent winning tradition — a rarity in the ever-fluctuating MAC — there have been few conference championships to show for it.

Toledo last won a division title in 2004, and then beat Miami (Ohio) for the MAC crown. In the years since, they’ve averaged more than six wins per season, yet other programs’ extended periods of dominance stood in the way. Northern Illinois, Central Michigan and Bowling Green have respectively lorded over the MAC West, taking all but two titles from 2005 through 2016.

Even considering its coaching change last year (from Matt Campbell to Jason Candle), that streak could finally be coming to an end. Given the success Toledo’s had lately, it’s amazing it’s taken so long.

Twice in the past six seasons, the Rockets have been ranked. And once, they even reached as high as No. 19 (in 2015, when they started 7-0). They currently sit just outside the polls, with a pretty good chance to jump up in case of another weekend of chaos.

Toledo’s upset ranked teams (Arkansas, most notably), regularly rattled off eight- and nine-win campaigns, and taken home bowl championships against some of the Group of Five’s elite programs. This season, however, has a chance to (finally) win much more than that.

The Rockets are already a top-25 team if you ask Bill Connelly’s S&P+. Toledo came in at 19th after Week 10’s action, and could continue to climb with more wins in the bag. Following a marginal start to the season — and a big loss to Miami (Florida) — UT’s recently found itself a higher gear. Three of the last four games have seen performances in the 90th percentile or higher, with an adjusted scoring margin above 30 points per game.

Thursday’s 27-17 win over NIU was the second-lowest scoring output of the season. Wins in the two previous weeks against Ball State and Akron saw a combined 106 points.

And in many ways, this is sort of Candle’s best chance to cash in on the talent recruited by Campbell at his peak. Candle was there as well, mind you, when these players came aboard. But this year’s group is senior-heavy and understands where they previously fell short. They may also have something to prove in light of Campbell’s success at Iowa State. Just because he went off to greener, winning pastures doesn’t mean the players left behind have no shot for championships of their own.

Quietly, the Rockets have one of the country’s most effective quarterback-running back tandems in the country. Senior Logan Woodside has thrown for over 2,600 yards and 19 touchdowns (to just two interceptions). Fellow senior Terry Swanson has run for 844 yards and 11 scores. They’re far from the only contributors on offense — but they’re key parts to this narrative.

They, like the many other seniors littering the depth chart right now, were part of the 2015 campaign. They were there for the tight losses to Northern Illinois and Western Michigan. Those players all saw how close they were to a real shot at a MAC championship and even an access bowl spot.

This year, in many ways, is an effort to make good on the promise initially laid out two years ago. And the promise this program’s been teasing at for over a decade now, without being able to get over the hump.

Toledo could really start solidifying themselves this week, though. In their toughest test since the Miami game, they’re on the road this Wednesday against a 7-2 Ohio team sitting atop the MAC East. Depending on what happens elsewhere, a win could clinch a spot in the league title game. But even if it doesn’t, a 9-1 Rockets squad would be forcing itself into the access bowl conversation.

UCF and Memphis are both included in the current College Football Playoff rankings, and Toledo and USF are the only other Group of Five teams with one loss or fewer. The Knights’ schedule (impacted by Hurricane Irma) harms them if they take on a loss. Memphis has already fallen to UCF and USF’s poor schedule has already dragged it down despite one single defeat.

Toledo’s resume is far from perfect, though the Miami game helps. An unbeaten run from here includes at least one win over Ohio, plus a victory over WMU. Without a UCF loss, would it be enough?

That’s up to the committee, and out of the Rockets’ hands right now. But what is in their control is a shot to win the MAC. Win those remaining games and check that box, then let the CFP stuff materialize (or not) from there. Toledo’s been waiting 13 years to sit atop the MAC again. There’s no need to start looking past that accomplishment already.