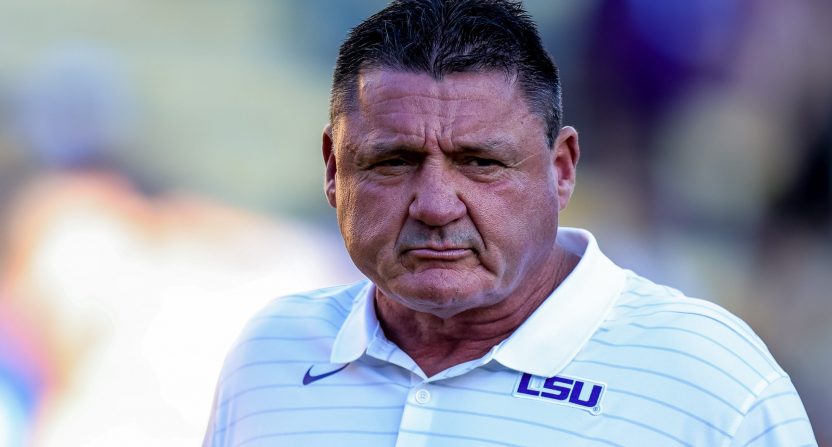 The culture of more claimed another SEC football coach. The latest to be swallowed up is LSU’s Ed Orgeron, who reportedly will leave at the conclusion of this season after reaching a settlement agreement.

It Just Means More. That’s not just a slogan. It’s a fact of life in the SEC. More talent, more exposure, more prestige, more money. Also: more pressure, more expectations, more scrutiny, more headaches. The only thing “less” about the SEC is patience. And when that runs out, coaches get run off.

Don’t feel too bad for Orgeron, who’s exiting with a golden parachute. His buyout for termination is a whopping $17.15 million. The negotiated settlement won’t be as pricey, but it will still cost LSU millions.

Orgeron knew what he was getting into. He’s a Louisiana native who has coached in the SEC before. He spent three lousy seasons at Ole Miss (2005-2007). But it’s one thing to be bad at a second-tier program in Division I’s toughest conference. It’s quite another to rise and fall so spectacularly at a blueblood.

Only in the Land of More can a championship coach be forced out this quickly.

Remember 2019? Wasn’t that long ago, but the world was a different place. Pre-COVID-19. Different president. And Orgeron was on top of the world. He assembled quite possibly the greatest college football team we’ve ever seen. Joe Burrow! Ja’Marr Chase! Justin Jefferson! Clyde Edwards-Helaire! LSU went 15-0 during an overwhelming national championship run. That squad has produced six future NFL first-round draft choices.

An impressive feat in the era of Alabama dominance led by a guy who’s the opposite of highly polished Nick Saban.

Orgeron, cartoonish-looking with a thick Cajun accent, was no longer mocked. He was celebrated. Local guy and former LSU interim coach does good. Orgeron grew up just a hundred miles away from campus in tiny Larose, LA. Life was grand. But while fans can marinate in that championship feeling forever, coaches don’t have that luxury.

They must win. In the SEC, that means win more.

Who knew Orgeron would be Gene Chizik 2.0? Like Orgeron, Chizik was an unheralded and unlikely choice for Auburn. He had previous coaching experience but also had a losing record. In his second season, however, those Tigers rolled to 14-0 and the 2010 national title behind Cam Newton. The Tigers seemed like the new power in the SEC. However, Newton left for the NFL after the championship season. Auburn never recovered.

Chizik was gone by the end of 2012, committing the unforgivable sin of going 0-8 in conference play. We haven’t seen a championship fall like that until now.

Orgeron went 5-5 the season after winning it all. Still, you could produce plausible excuses during a pandemic year. Plus, there was an exodus of talent and brain power. Chase, who caught an SEC-record 20 touchdown passes in 2019, elected to opt-out. Passing game offensive coordinator Joe Brady became the offensive coordinator for the Carolina Panthers.

Things got worse for Orgeron as ugly details of alleged sexual assaults involving an LSU player received more attention. In June 2021, Orgeron was added as a defendant in a Title IX lawsuit. The suit alleges the coach knew about and failed to report the alleged rape of a student. Previously, Orgeron denied knowing of the allegations. He issued a statement saying that ex-LSU star running back Derrius Guice’s alleged sexual harassment is “utterly unacceptable.”

Ed Orgeron has a poor record handling sexual assault and dating violence allegations against his players, which USA TODAY detailed extensively over the last year. Re-upping some of our reporting on that in light of today’s news at LSU:

A horrific mess. So, even before the 2021 season started, Orgeron had to know this year could be his last. One way schools show that their sports programs take the safety and welfare of students seriously is to change leadership.

LSU entered ranked No. 16 in the preseason AP poll with seven players selected to the all-conference. But the Tigers opened with a 38-27 upset loss at UCLA and later dropped back-to-back games to ranked Auburn and Kentucky. Saturday’s 49-42 home victory over No.20 Florida had some speculating that Orgeron might be able to save his job.

Sunday’s announcement ended all that. It looks like the Tigers (4-3, 2-2) will close out this season with a lame duck.

Orgeron, 60, might be able to land another job. But those disturbing allegations will make it difficult.

LSU will be fine without Coach O. The Tigers have lost or ousted championship coaches before. Nick Saban left for the Miami Dolphins. Les Miles was fired. This is one of the best jobs in the nation. It wouldn’t surprise anyone if LSU made a substantial push for Brady. Cincinnati’s Luke Fickell might be the hottest name out there. Or how about poaching another SEC school and grabbing Texas A&M’s Jimbo Fisher or Ole Miss’s Lane Kiffin?

Whoever takes over will embrace the magic of SEC football. They should also brace themselves for the misery. That’s the cost of coaching where it just means more.