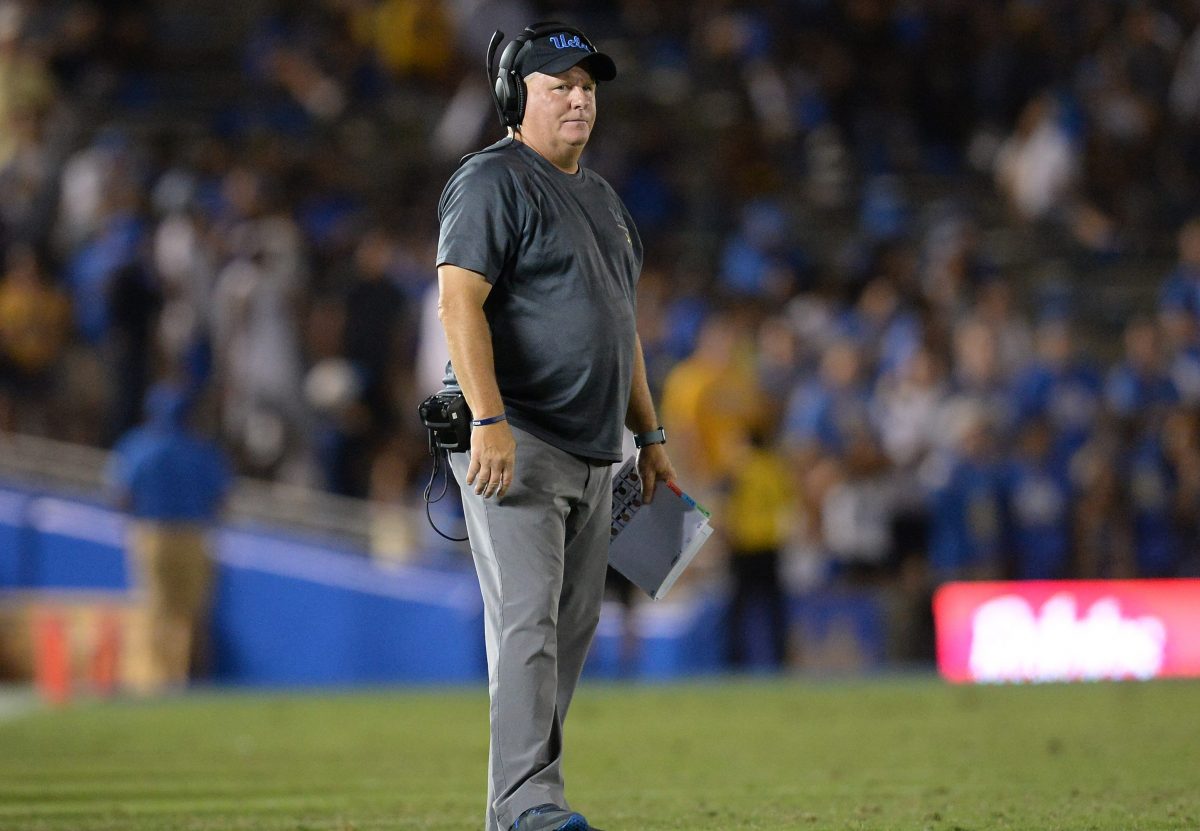 Every coach wants to be the smartest guy in the room. Someone who can see and scheme beyond his peers. The next X’s and O’s Einstein. But relatively speaking, sports geniuses have an expiration date.

Bill Belichick and Nick Saban are outliers. Steep ascents are often followed by sharp descents. Genius fades. And sometimes it comes with a final insult: people questioning whether you were ever a genius in the first place. Was your success simply a case of fortunate circumstances?

It’s still relatively early. A lot can change over the next few months. And yet, why does it seem like the beginning of the end? It wasn’t supposed to be this way. No one could have predicted that Kelly’s UCLA stint would look like a slow-motion train wreck that might culminate with an embarrassing and expensive ouster.

UCLA is 0-3 after Saturday’s 48-14 home implosion vs. then-No.5 Oklahoma. ESPN’s Football Power Index predicts that there is a good chance that the Bruins could open 0-5 and finish the season 3-9. Kelly is No.1 on coacheshotseat.com, ahead of Florida State’s Willie Taggart (No.2) and USC’s Clay Helton (No.7).

Kelly, the most sought-after college football mind just a few years ago, is a shocking 3-12 at UCLA. The Bruins beat out Florida for Kelly’s services, signing him to five-year, $23.3 million contract with a $9 million buyout. This seemed like a perfect fit. Virtually every pundit applauded this move.

It was easy to overlook Kelly’s failures in the pros. In the NFL, coaches have less power and less control over player acquisition due to the salary cap, free agency and the draft. Those limitations turned Saban into loser with the Miami Dolphins. Success returned for Saban once he got back to college. We expected the same for Kelly.

He was synonymous with innovation. At Oregon, Kelly used a fast-paced, high-scoring revolutionary attack. He turned the Ducks (46-7 record from 2009-12) into the Pac-12’s premiere program, reaching the national championship game in his second season. Kelly’s offense was so groundbreaking that even Belichick sought his football advice.

Yes, he was fired from two NFL jobs (the Philadelphia Eagles and San Francisco 49ers). But now he was back in the Pac-12 where he went 33-3 in league play. UCLA would finally be not only a dominant program, but it would surpass USC as Los Angeles’s cool football school.

Kelly went 3-9 in his first season. Blame Jim Mora? A coach can always point to the previous staff’s lack of recruiting and player development. But so far in Kelly’s second season, the Bruins are regressing. They haven’t scored more than 14 points in a game. At Oregon, Kelly would easily score 14 points in a quarter.

Kelly isn’t even running the offense that made famous at Oregon. He says that system is outdated and football has evolved. That might be true, but UCLA hired Kelly to create excitement. He was supposed to re-energize the fan base. However, many have already tuned out.

Firing a football coach after two seasons is never ideal. Decades ago, a coach could count on getting at least four years to prove himself. These days, it’s hard for a coach to survive when the on-the-field product is bad, and attendance is poor.

If Kelly is fired, it will be one of the biggest hiring busts this century. What could save Kelly in the short-term is his $9 million buyout.

If you want to be an optimist, you can point to UCLA’s youth. Preach patience and evaluate where the program is after three full seasons. Do the Bruins really want to start from scratch all over again? A new staff with new ideas needing new recruits.

If you want to be a pessimist, examine Kelly’s career a little closer. He was promoted from offensive coordinator to take over an Oregon program that Mike Bellotti built. He improved it, parlaying that success into an NFL job with the Eagles.

Kelly has never had to develop a winning college program. UCLA hasn’t been nationally relevant since 2014 when the Bruins went 10-3. They haven’t finished above .500 since 2015. This task might be too much for him. He might be the wrong fit.

Or maybe Kelly’s genius expired a long time ago.