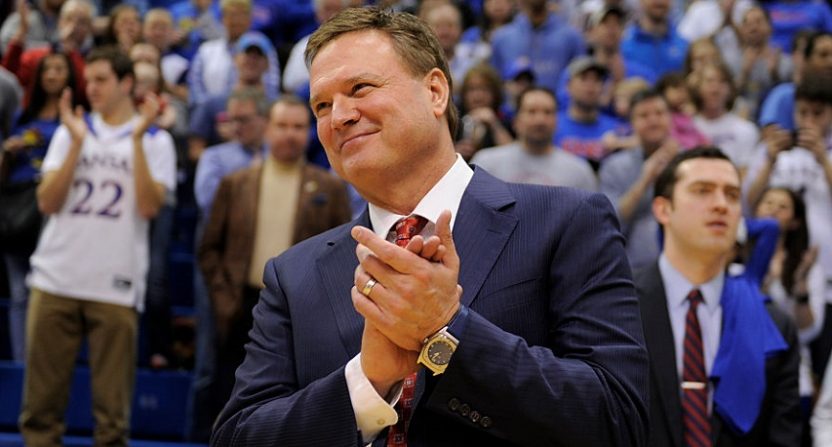 We’re down to the Sweet 16 in the 2017 NCAA Tournament. The Final Four is two victories away for a quartet of teams among those who survived the tournament’s first weekend.

For some coaches, getting this far will already be considered enough of an accomplishment. But more is expected from several others, who carry the pressure of their previous success and leading renowned college basketball programs. Here are five coaches who could really use a Final Four breakthrough:

Mark Few’s record at Gonzaga is 500–112. His winning percentage of .817 is the best among active coaches. When the Zags beat Northwestern last weekend, he became the third fastest coach to 500 victories in NCAA history, behind only Adolph Rupp and Jerry Tarkanian. If Few never coached another game, he would be a lock for the Basketball Hall of Fame.

However, one accomplishment has eluded him. Few has never been to the Final Four. Gone are the days when Gonzaga was an adorable mid-major. It’s a major-conference program that just happens to reside in a mid-major conference. While everyone keeps waiting for Gonzaga, other schools like Butler (twice), Wichita State and VCU have reached the national semifinals.

This looks like the year Mark Few or Sean Miller will finally get to a Final Four. Not only that–the winner of Zona/Zags could win it all.

The Zags’ road could be tougher than any of the remaining schools. They face West Virginia on Thursday and probably No. 2 Arizona in the Elite Eight. West Virginia and Florida are the two best eight-loss teams in the field. Gonzaga beat Arizona, 69-62, earlier this season but that was when the Wildcats were short-handed and hurt.

Everyone says this is the most talented Gonzaga team ever. It’s time to prove it.

Along with Few, Sean Miller might be the best active coach never to have reached the Final Four.

Miller has lost in the Elite Eight four times. When he was at Xavier, the No. 3-seeded Musketeers got within a victory of the 2008 Final Four, but lost to a top-seeded UCLA team which had Russell Westbrook and Kevin Love. At Arizona, Miller has been denied three times. In 2011, the No. 5-seeded Wildcats were beaten by No. 3 Connecticut. Then, in back-to-back seasons, Arizona was eliminated by Wisconsin.

The 2014 overtime loss was particularly painful. No. 1 Arizona got edged out by No. 2 Wisconsin, 64-63. The Wildcats, who had won 21 straight games and spent eight weeks ranked No. 1 in the nation, had three chances to win it in the final seconds. But a missed jumper, an offensive foul and another missed jumper sealed their fate.

The next year, these schools met again in the Elite Eight with Wisconsin as the No. 1 seed and Arizona No. 2. This wasn’t quite as dramatic with the Badgers winning, 85-78. Afterward, Miller said: “I’m not going to apologize for going 34-4 and I’m not going to apologize for not making a Final Four. We lost to Wisconsin in two hard-fought battles in the Elite Eight and if that’s a problem, I think you know what you can do.”

This year, Miller was the Pac-12 Coach of the Year, holding together a team that was ravaged by injuries early and without Allonzo Trier for 12 games due to a PED suspension.

This could finally be Miller’s year.

The moment Indiana fired Tom Crean, Steve Alford became the most talked about coach in the field. The funny part is that Alford currently has a job at a traditional rich powerhouse – and his team is still playing.

If Alford is truly interested in the IU job, he’s in a prickly situation. This isn’t Brad Underwood negotiating with Illinois in secret while he’s at Oklahoma State, and then bolting for the Illini. There is nothing quiet about UCLA or Indiana, who bring a lot of attention and media scrutiny. UCLA fans have never really warmed up to Alford.

Steve Alford asked for at least third time this week about the Indiana job. "I don't have anything else to say. I'm not going to address it"

Indiana loves Alford the player for the 1987 national championship he helped bring, but aren’t exactly fond of his coaching skills. He was mediocre at Iowa and there was the Pierre Pierce scandal. Alford was very good at New Mexico. At UCLA, Alford’s been up (three Sweet 16s) and down (15-17 last year). At the end of last season, he was on the hot seat.

Regardless, getting to the Final Four would do a lot for Alford’s image. He has the talent: Lonzo Ball and T.J. Leaf are terrific freshmen. UCLA has already beaten Kentucky and in a potential Elite Eight match-up against North Carolina, the Bruins will have a punchers’ chance. Beating Calipari and Roy Williams in back-to-back games would be impressive.

John Calipari’s on this list because the Kentucky coach is always on this list. Calipari is expected every year to A) compete for a national championship, B) sign a great recruiting class, and C) See A.

Kentucky hasn’t been to the Final Four since all the way back in 2015 and that’s waaaay too long.

Calipari’s dream of a perfect season in 2015 was shattered in the national semifinals by Wisconsin. (The Badgers have a way knocking off people, don’t they?) These Wildcats aren’t as talented as those Wildcats, but they have multiple probable first-round draft choices: freshmen guards Malik Monk, De’Aaron Fox and forward Bam Adebayo.

For a while, it looked like Kentucky might go undefeated in the SEC. It didn’t quite happen that way but given the conference’s success in the tournament (Kentucky, South Carolina and Florida), perhaps the league deserves more credit.

Kentucky has a tough road ahead as all of the top four seeds in the South advanced. Even if the Wildcats beat UCLA, there’s (probably) North Carolina waiting for them. That will be must-see TV after Kentucky and North Carolina played an epic game last December with Monk scoring 47 points.

Somewhat for the same reasons as Calipari, but Kansas is not quite the one-and-done factory. After all, Perry Ellis is still on the team. Wait a minute? He’s not? Are you sure?

Why didn't Perry Ellis start for Kansas? Is he hurt or something?

Jokes aside, there are no excuses for Self.

Among the No. 1 seeds, The Jayhawks were the No. 2 overall. And now that Villanova has been knocked out, Kansas seems poised to be the national champion. It will have a substantial home-court advantage with the Midwest Regional in Kansas City. While Purdue has formidable size, Kansas has the better team. Also, the Jayhawks don’t figure to have too much trouble with Oregon or Michigan.

Frank Mason III and Josh Jackson are ready to power Kansas to the Final Four.