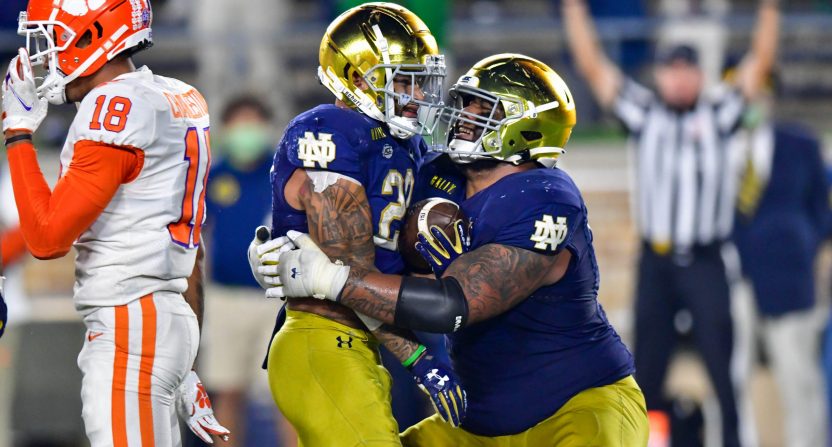 The No. 4 Notre Dame Fighting Irish took down No. 1 Clemson 47-40 in double overtime on Saturday night in South Bend. Here are our main takeaways from Notre Dame’s huge win:

What a game, and what a finish

Well, this one lived up to the hype, even with Trevor Lawrence (COVID-19) not being part of it. The finish was particularly wild.

It appeared that Clemson was going to come away victorious, but quarterback Ian Book led Notre Dame on a game-tying drive — which included a 53-yard completion — in the final two minutes.

Ian Book to Avery Davis for 53 yards to the Clemson 5! pic.twitter.com/i9XIW6LXTp

All tied up after this touchdown (and then the XP)! pic.twitter.com/Ims6TWDGi4

Each team scored a touchdown in the first overtime, but Notre Dame was the only team to do so in the second overtime to come away with a 47-40 victory.

The scene on the field after Notre Dame beats Clemson. That's a lot of people. pic.twitter.com/JtT4ueQlQR

While the Notre Dame offense had a balanced, effective attack (310 passing yards, 209 rushing yards), their run defense was the difference in this game. Clemson had 33 carries for only 34 yards. That’s while having star running back Travis Etienne, who was held to 28 yards on 18 carries (1.6 AVG).

Now, the Notre Dame pass defense wasn’t great, but that was more about the Clemson quarterback play than anything…

D.J. Uiagalelei is the next superstar Clemson QB

In this incredible Clemson run, they’ve had Deshaun Watson and Trevor Lawrence at quarterback. And it appears the Tigers are in very good hands with the next quarterback in line.

6’4″, 249-pound freshman D.J. Uiagalelei completed 29-of-44 passes for 439 yards, two touchdowns, and no interceptions vs Notre Dame. He also had a rushing touchdown.

Clemson is on the board. D.J. Uiagalelei and Cornell Powell connect for a 53-yard Tigers touchdown. pic.twitter.com/KyoZlvNju8

Excellent play design for the Clemson TD. Tied up with Notre Dame 23-23. pic.twitter.com/Hx1upS8bvs

D.J. Uiagalelei has 426 passing yards, the most against an AP-Top 5 team in Clemson history.

He is the 5th player in Clemson history with 400 passing yards in a game.

He has as many 400-yard passing games as Trevor Lawrence (1 each). pic.twitter.com/aMWYcxTMhF

From @ESPNStatsInfo: #Clemson QB D.J. Uiagalelei's 426 passing yards mark the most EVER against #NotreDame, surpassing former USC quarterback Carson Palmer's mark of 425 in 2002.

Uiagalelei is already really good, and it’s clear that he’s still trying to figure it out (after all, he’s a freshman). When he puts it all together? We obviously can’t say that he’ll be as impactful as Watson or Lawrence, but he should be able to keep Clemson as an elite program. Heck, he carried the Clemson offense to double overtime against the No. 4 team on the country, on the road, in his second collegiate start!

This was the win Notre Dame has lacked in recent years

The loss snapped Clemson’s regular-season winning streak of 36 games, and it gave Brian Kelly the kind of victory that has eluded him in his Notre Dame tenure. In fact, Kelly was 0-7 against top-5 teams entering this game.

Brian Kelly was 0-7 in his career against AP Top-5 teams.

The Notre Dame coach got his first win tonight 👏 pic.twitter.com/LnBTEr42Mb

Notre Dame has consistently come up just short despite high expectations over the last several seasons. It nearly happened again on Saturday night, but they found a way to get the victory, and that’s a massive momentum boost to the Notre Dame program.

Clemson still has a great shot to make the College Football Playoff even after the loss. They entered this game ranked No. 1, they were without the best player in the country (Lawrence), and there’s a good chance they win their remaining scheduled games (and there’s the ACC title game). If they indeed take care of business the rest of the way, it’s hard to imagine them being left out of the CFP.

It was definitely a bigger game for Notre Dame on that front, and the win puts them in great position with some room for error. There’s no overstating the significance of this victory for the Fighting Irish.