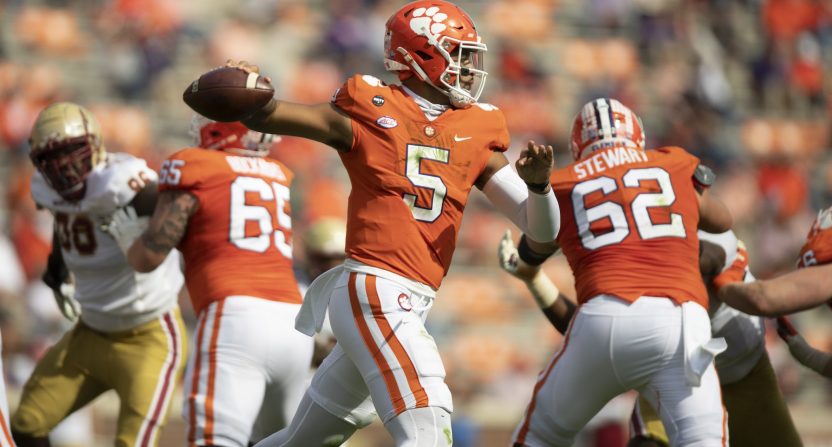 Lawrence tested positive for COVID-19, so he’s currently following the ACC’s protocol to return. After today’s game, we learned that Lawrence also won’t be available for next week’s anticipated showdown with Notre Dame, either, which is obviously a huge loss for the Tigers.

Trevor Lawrence is officially out vs. Notre Dame.

(To be clear: the health concerns are most important, more than any on-field impacts, including whoever Lawrence may have come into contact with. Moving on.)

That meant freshman QB D.J. Uiagalelei took over today. The benefit of being Clemson: Uiagalelei is a five-star recruit and one of the top-two quarterback recruits in the country.Still, a freshman starting after a very weird, limited offseason is a tall order for any player, highly-touted or not, and the first half showed what can happen. Uiagalelei was okay in the first half, though a fumbled exchange near the goal line led to one of the more surprising plays of the college season so far:

This defense. This TEAM…
Is just DIFFERENT.

Boston College actually took a 28-13 lead into hafltime, which very few people saw coming. BC was 4-2 entering today, and they’re not a pushover, but Clemson is, well, Clemson. The second half saw Clemson reiterate that fact, with the defense putting the clamps on the Eagles.

BC had five possessions across the final two quarters, and here’s how they went:

In the meantime, Uiagalelei found his footing. Literally, in this case, as he scrambled for a 30-yard touchdown run.

D.J. Uiagalelei with a 30-yard touchdown run on 4th-and-1 for Clemson. Will Boston College be able to hang on and pull off the huge upset? pic.twitter.com/YRaWhMzj1D

That cut the deficit to one score, and Uiagalelei passed for another touchdown on Clemson’s next drive. A failed two-point conversion meant they didn’t tie it up, but you can refer back to that Boston College drive chart to see that Clemson had plenty of chances to put the game away.

That’s exactly what they did, scoring another touchdown with their next possession, this time via a Travis Etienne run. The offense wouldn’t score again, but they did enough for the comeback victory.

Again, this is Boston College, though. Notre Dame next week is a very different thing; they’re currently en route to beating Georgia Tech to move to 6-0, setting up a matchup between top-five teams in South Bend next weekend. Lawrence missing the game is brutal for him, for Clemson, and for neutral fans hoping to tune in for what had been circled as one of the marquee regular season matchups this year.

It’s a boost for Notre Dame, though, and it’s also a showcase opportunity for Uiagalelei. A true freshman making his second ever start, on the road at Notre Dame with huge playoff implications? That’s a massive chance to put your stamp on the team, which is huge for him considering Lawrence is nearing the end of his run with the Tigers. The team will almost certainly be Uiagelelei’s next season, but he has a chance to make his mark on this season first.

It’s not the circumstances anyone would have wanted for that, but we’re going to get a look at someone who could be a huge star of of the sport going forward. That’s still worth watching.